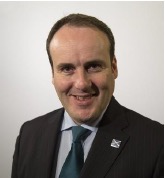 Scotland was amongst the first countries in the World to declare a climate emergency and we understand the urgency of moving our economy and society to generating net zero greenhouse gas emissions (or 'net zero').

Our world leading climate change targets, to achieve net zero greenhouse gas emissions by 2045 and a 75% reduction by 2030, against the 1990 baseline, mean that across our economy we will need to move at an unprecedented pace to deliver the innovation, investment, regulation and the market environment that will enable the required step change towards net zero.

Hydrogen, the most abundant element in the universe, is rapidly emerging as a sustainable solution for the decarbonisation of the economy and a key piece of the energy transition picture – a view now held in Scotland, Europe and around the world.

Hydrogen can be used as an alternative to natural gas to transfer and store energy, delivering that energy to end users in a form that emits no carbon dioxide when it is used. It is particularly relevant as a potential replacement for fossil fuel feedstock in industrial and chemical processes; in transport as an alternative to internal combustion engines, especially heavy-duty vehicles such as buses, heavy goods vehicles, trains and ships; and has the potential to be used for heat and cooking in our homes.

Scotland has in abundance all the raw ingredients necessary for the production of low-cost, clean hydrogen.

Our reputation for excellence in energy, our extensive oil and gas supply chain and our strong onshore and offshore wind sectors, are the key to our achieving a just transition to a low carbon and then net zero age. Both our oil and gas and renewable energy sectors will be critical to establishing stable and secure production of affordable large-scale hydrogen.

Scotland has an estimated 25% of all the wind resource in Europe, due to our location and climate. We also have one of the largest concentrations of offshore engineering expertise in the world. With 1 GW of installed capacity, rising to 11 GW by 2030, and rapidly decreasing costs, our offshore wind sector is forecast to grow significantly as Scotland and the UK progress towards meeting decarbonisation targets. This adds to our already significant onshore wind capacity of 8.4 GW which could also be deployed to generate clean hydrogen.

We are globally renowned for innovation in offshore wind, including the world's first floating offshore wind farm, 'Hywind Scotland', with a strong pipeline of planned projects to come. Scotland also has a strong track record for advancing hydrogen technologies and demonstrating its production and use in island and mainland projects.

As a nation, we have the opportunity and capability to benefit from the transition away from fossil fuels and produce large volumes of clean hydrogen which will not only help reduce Scotland's emissions and support meeting Scotland's challenging greenhouse gas emissions targets, but will also allow Scotland to develop a role as an exporter of hydrogen to other partner nations and to create and protect jobs and provide economic benefit for Scotland. We have the resources, the assets, the people and the ambition to achieve this.

In this policy statement we are committing to make hydrogen a key element of Scotland's decarbonisation plans. This document describes the roles that hydrogen could play in our vital energy transition and the scale of economic growth and supply chain development which hydrogen presents.

Economic impact scenarios developed this year as part of our Scottish Hydrogen Assessment Project suggest that in the most ambitious scenario, establishing Scotland as an exporter of green hydrogen to Europe, where there is already growing demand, could result in a £25 billion (bn) annual gross contribution to Scotland's Gross Value Added (GVA) with over 300,000 jobs supported by 2045. The report suggests that this would be achieved by unlocking Scotland's vast offshore wind potential, resulting in Scotland producing large-scale, 'green hydrogen' that is competitively priced within a growing European market.

Analysis tells us that Scotland could produce enough hydrogen to meet our demand and also support an export market to Europe. Our policies will be focussed on support for the development of a low-cost hydrogen capability to meet an initial ambition of generating 5GW of renewable and low-carbon hydrogen by 2030.

No one fuel or technology is by itself the solution to climate change, but hydrogen has the potential to be an important part of a decarbonised energy system and we are committed to supporting the emerging hydrogen sector in Scotland and also maximising the 'new-industry' benefits that the production of hydrogen may bring.

In 2021 we will publish our Hydrogen Action Plan which will set out the actions we will take to implement our hydrogen policies. This will be accompanied by £100 million funding to boost excellence in research, innovation development and demonstration of secure, low-cost clean hydrogen production between 2021 and 2026.

Our vision is for Scotland to become a leading Hydrogen Nation in the production of reliable, competitive, sustainable hydrogen and secure Scotland's future as a centre of international excellence as we establish the innovation, skills and supply chain that will underpin our energy transition.

Scotland's unique selling points, are its natural resources, infrastructure and skilled energy workforce which enable us to become the producer of lowest cost hydrogen in Europe by 2045.

This is our ambition. But Government can't achieve it alone. I hope now that our clear signal of intent, founded on evidence of demand, will allow industry and investors to respond with confidence. The global hydrogen market is developing rapidly, international partnerships are already being established and so, with shared ambition, co-ordination, collaboration and pace, we look toward to achieving a sustainable energy transition and realising our exciting hydrogen future.

Paul Wheelhouse MSP
Minister for Energy, Connectivity, and the Islands.