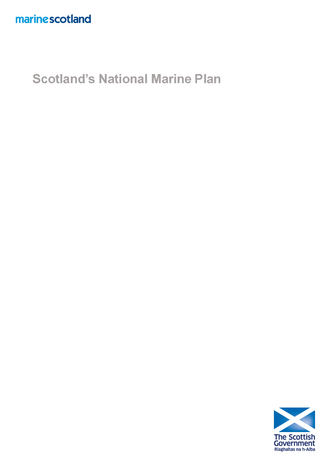 1.3 The two Acts (referred to as the Marine Acts) established a new legislative and management framework for the marine environment allowing the competing demands on the sea to be managed in a sustainable way across all of Scotland's seas. Under the Marine (Scotland) Act 2010 Scottish Ministers must prepare and adopt a National Marine Plan covering Scottish inshore waters. In addition, the Marine and Coastal Access Act 2009 requires Scottish Ministers to seek to ensure that a marine plan is in place in the offshore region when a Marine Policy Statement [3] is in effect.

1.4 The Scottish and United Kingdom Governments have agreed that a marine plan for Scotland's inshore waters and a marine plan covering Scottish offshore waters will be published in one document and will be collectively referred to as the 'National Marine Plan'. However, we recognise that the 'National Marine Plan' comprises of two Plans made under two separate pieces of legislation therefore unless otherwise stated, policies within this Plan apply to both inshore and offshore waters. The National Marine Plan will not affect reserved functions within inshore waters until a direction is made under the Marine (Scotland) Act 2010 (Consequential Provisions) Order 2010.

1.6 This Plan has been prepared in accordance with, and gives consideration to, the EU Directive 2014/89/ EU which came into force in July 2014. The Directive introduces a framework for maritime spatial planning and aims to promote the sustainable development of marine areas and the sustainable use of marine resources. It also sets out a number of minimum requirements all of which have been addressed in this plan. In particular, Chapters 4 and 6-16 demonstrate how our planning process contributes to the sustainable development of those objectives set out at article 5(2) of the Directive as well as other objectives relevant to this plan area. In doing so, and in accordance with article 5(3) of the Directive, we have considered a wide range of sectoral uses and activities and have determined how these different objectives are reflected and weighted in the marine plan. Land-sea interactions have also been taken into account as part of the marine planning process. Involvement of stakeholders has been central to the development of this plan and full details of the procedures and processes used, including those to ensure stakeholder engagement and cross-boundary working are set out in the Statement of Public Participation [4] .

1.7 The requirement to prepare an assessment of the condition of the Scottish marine area including a summary of the significant pressures and human impacts has been met through the publication of Scotland's Marine Atlas: Information for the National Marine Plan [5] . An interactive GIS portal - National Marine Plan interactive ( NMPi) [6] - has been developed to display the spatial data which underpinned the Atlas. NMPi is referenced throughout this Plan where relevant.

1.8 A Sustainability Appraisal ( SA), which includes Strategic Environmental Assessment ( SEA), and Business and Regulatory Impact Assessment ( BRIA) for the Plan have been carried out. The reports [7] were published for consultation along with the Draft National Marine Plan and these reports are available on the Scottish Government website. An updated BRIA and an addendum to the SA are now also available on-line. A draft Habitats Regulations Appraisal has been undertaken [8] and the results of the screening have shown that an appropriate assessment of this Plan will not be required.

1.9 As required by the legislation, the Scottish Government has notified public authorities with responsibilities in waters adjacent to the Plan area.