Contents
Scotland's Fiscal Outlook: the Scottish Government's five-year financial strategy
Foreword by the Cabinet Secretary for Finance and the Constitution

Foreword by the Cabinet Secretary for Finance and the Constitution 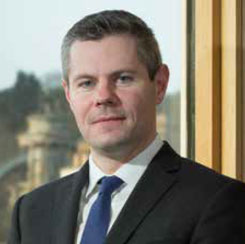 The context and content of the Scottish Budget has changed significantly since the Scottish Parliament began scrutinising our budget almost 20 years ago.

Since then we have seen the devolution of a range of additional powers to the Scottish Parliament, including the ability to raise our own tax revenues, and we have seen the introduction of a new Fiscal Framework that sets out the way in which Scottish public finances will be managed.

This document forms a key part of the revised Parliamentary budget process that has arisen out of the Budget Process Review Group and the development of a year-round approach to budget scrutiny.

It ensures that both Parliament and Government have foresight of the financial challenges and opportunities that lie ahead and will help ensure that we are able to adapt to these circumstances to fund the public services which our people and economy rely upon.

The Scottish Government will continue to manage Scotland's finances in a competent, responsible and balanced way – as has been the case in every year since 2007. This will include the continuation of our approach to taxation being founded on our four key principles of Certainty, Convenience, Efficiency and Proportionality, ensuring that we are able to provide stability for our taxpayers and public services during the turbulent and uncertain economic climate in the coming years.

Growing and supporting the Scottish economy is key to our efforts to ensure financial stability and to maximise the resources available for our public services. Transforming Scotland's economy is at the heart of everything this Government does, including the way in which we plan, utilise and allocate our available financial resources.

The Scottish Government is ambitious for Scotland and we will target our resources to support the delivery of the social contract. Over the remainder of this Parliament we will deliver on our key commitments, built on the principle of equality for all, from birth through early years and education, to employment and retirement. We will ensure that people are able to access essential public services, when they need them, which are free at the point of delivery. This will include our commitments to:

In order to support that ambition, this Medium Term Financial Strategy explains the Fiscal Framework and funding arrangements that the Scottish Government now operates within, outlines our approach to financial management and fiscal rules, sets out a range of possible funding scenarios for the Scottish Budget over the next five years based on Scottish Government modelling using the Scottish Fiscal Commission economic and fiscal forecasts as the central scenario. The Strategy also details our key policy priorities and approach to supporting Scotland's economy.

The economic and financial outlook is uncertain, and delivering our first Medium Term Financial Strategy over multiple years, as a devolved government working within a UK framework, is not straightforward.

Our public finances continue to face the impact of the financial constraints imposed on us by the UK Government's austerity approach and the financial pressures created through the £2.6 billion real terms reduction in our discretionary block grant (between 2010-11 and 2019-20), but the Scottish Government is determined to deliver a strong economy, protect the delivery of public services and reduce inequality – all of which will continue to be supported through our longer term approach to financial planning.

The Scottish Government does not have all the flexibility and levers available to the UK Government to manage and plan its finances. We do not at this stage have any confirmed resource budgets beyond 2019-20, and the forecasts that underpin the Strategy will change between now and the point that we set firm budgets in the future. Funding levels in this document are indicative and our approach to setting firm budgets for future years will require refinement and adjustment based on the most up to date information at the time.

This document also makes a case for the UK Government to make different choices on their approach to economic and fiscal policy, in view of the impact of their current approach to Scotland's public finances. In particular, this includes taking a different course on austerity, the UK Government's intention to leave the EU Single Market and Customs Union and their damaging approach to immigration. The UK Government's proposed approach on immigration alone could see real Gross Domestic Product in Scotland 9.3 per cent lower by 2040, undermining tax revenues and public services. Different choices on any or all of these policies would deliver a better deal for Scotland. We will continue to make the case for the UK Government to change its course where its policies are damaging our economy and public services.

It is clear that the economic and financial outlook over the medium term will be challenging, but it is the job of the Scottish Government to manage those challenges and to prioritise our use of the Scottish Budget to effectively deliver on our commitments, grow the economy and support our vital public services.

This is the first step in the new budget process and it is one that will evolve over time, to continue to support the Scottish Government's responsible approach to financial management.

Derek Mackay MSP
Cabinet Secretary for Finance and the Constitution