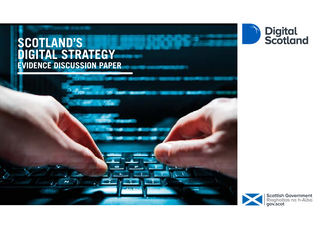 This section tracks progress to becoming a world leading digital nation based on currently available data. This highlights where Scotland performs strongly and where there are opportunities for further development.

Where possible, comparisons have been made with the UK and European nations and where comparisons over time are made, this will generally cover the period over which the data has been collected. The selected comparator countries have been chosen because they have similar economic characteristics to Scotland, in that they are small, open to trade and advanced economies.

Figure 4.1.1: Proportion of premises where next generation broadband access is available. [74]

Figure 4.1.2: Next generation broadband access for European Countries and Scotland, 2014 and 2015.

As well as fixed coverage, people increasingly rely on good quality mobile connectivity. The proportion of Scottish premises in areas with outdoor 4G mobile coverage from at least one national mobile network operator was 92% in May 2016, an increase of 35.6 percentage points from 2014. Additionally, more than half (58.4%) of premises have outdoor coverage from all four 4G networks.

Figure 4.1.3: Proportion of premises where superfast broadband access is available.

There are a range of qualifications which can be undertaken by individuals to support the development of digital skills, including national qualifications, modern apprenticeships and university degrees.

However, there is a strong gender divide within computing education. Figure 4.2.1 demonstrates that the number of females enrolling in Higher Computing has steadily declined over time. Although the number of male entries has fluctuated, enrolment is consistently above females. In 2015, only 19% of Higher Computing students were female.

Employers of digital-related posts who do not use modern apprentices tend not to do so because they do not believe they are at the right level for the business or because they prefer recruiting graduates. [80]

Around three quarters enrolled in ICT and computing college courses in 2014-15 were male. Males also accounted for a much higher proportion of credits (85%), indicating they are more likely to select more intensive courses than females. [81]

Higher education remains a key route into a career within the digital technologies sector, with many roles requiring degree qualifications and specific skills and knowledge.

The vast majority of universities in Scotland offer digital technology-related courses. Fifteen Scottish universities currently provide computer science courses at undergraduate level, with the majority offering additional postgraduate qualifications. [82] The number enrolled in computing and ICT-related courses at Scottish universities was 15,111 in 2014/15, an increase of 4% from the previous year. 75% of those enrolled were male. [83]

Up-skilling the current workforce is an important way of responding to the digital skills gap and keeping pace with new digital developments. The proportion of employers that provide training to develop their employees' digital skills is low, with only 26% of businesses in Scotland reporting that they were taking action to develop employees digital skills and a further 18% planning to do so in the future. [84]

Although internationally comparable data is unavailable for Scotland, the UK as a whole lags behind comparator countries in terms of the provision of training to develop ICT skills of existing staff. Figure 4.2.2 demonstrates that 27% of UK enterprises provided ICT training to their current workforce.

Figure 4.2.2: Percentage of enterprises that provide training to develop/upgrade ICT skills of their staff, 2015.

However, certain demographic groups in Scotland are less confident in carrying out online activities. Among those that have internet access, a lower proportion of adults in social housing were very or fairly confident in their ability to perform a variety of online activities than those in private rented housing. Those aged over 60 and those on incomes between £10,000-£20,000 consistently reported being less confident than average across all activities.

Figure 4.2.3: Percentage of adults with basic digital skills across the UK regions.

Figure 4.2.4: Confidence in pursuing activities when using the internet by tenure.

Although Scotland as a whole has high rates of internet use, this is strongly linked to age and household income. In 2015, 96.5% of 16-24 year olds used the internet, compared to 68.7% of 60-74 year olds and under a third of people aged 75 and older. Since 2007, the proportion of people making use of the internet has increased across all age groups. Those aged 60-74 have seen the greatest increase. However, internet use by age is expected to improve over time as young people, who are the primary users, transition into older age groups.

Figure 4.3.1: Percentage of adults using the internet for personal use.

Figure 4.3.2: Percentage of adults using the internet by age.

The proportion of households with home internet access is highest in accessible rural areas at 85% ( Figure 4.3.4). Internet take-up within urban and rural areas is broadly similar. However, there are differences between local authourity areas, with 89% of premises in Edinburgh and East Dunbartonshire having home internet access, compared to 73% in Glasgow.

The Digital Economy Maturity Index segments businesses in Scotland according to their level of digitalisation. [86] The index is based on four aspects of digital technologies: adoption, usage, benefits, and skills.

The vast majority of Scotland's businesses are classed within the second lowest or middle maturity segments, basic browsers (38%) and tentative techies (30%). Businesses classified within these segments tend to have broadband access and adopt a few digital technologies, such as a website and mobile technologies. However, they tend to lag behind in the adoption of more advanced technologies, such as cloud computing and management software. Such businesses are likely to not to see the full potential of how technologies can benefit the business.

Only 3% of Scottish businesses were classed as digital champions. These businesses are among the most likely to have adopted next generation broadband access, tend to have a digital strategy, and use digital technologies extensively.

Figure 4.4.2 demonstrates the general characteristics of businesses that were classed within the highest and lowest digital maturity segments. Businesses within the 'disconnected doubters' segment tend to be small, have little growth expectations, and lower annual turnover compared to other segments. Comparatively, businesses classed as 'digital champions' tend to be medium sized, expect to grow, export and have a higher annual turnover.

Figure 4.4.4 demonstrates that although a greater proportion of Scottish businesses have a website than the UK and the EU average, Scotland tends to perform worse on the use of more advanced digital business tools, including Enterprise Resource Planning, Customer Relationship Management and Supply Chain Management.

In addition, a Lloyds survey of small businesses and charities ranked Scotland with a digital index score of 57, compared to the UK average of 54. [89] 23% of Scottish businesses surveyed reported using digital to trade overseas, in comparison to 21% in the UK. Moreover, 51% actively create social media communications which is 6% higher than the UK average.

The digital sector in Scotland has experienced strong growth in recent years, providing an important source of employment and contributing to wider economic growth. The digital sector definition used consists of the service side of digital, including telecommunications, consulting and programming activities, as well as manufacturing of digital infrastructure and related equipment.

Figure 4.4.5 demonstrates that although digital sector exports to the rest of the UK have declined slightly between 2014-15, international exports have increased by approximately 23% over the same period.

Digital Clusters and Specialisation Within Scotland [99]

Digital technology clusters are geographical concentrations of digital businesses that specialise in particular areas of digital technologies. Scotland is the home to three main digital clusters: Edinburgh, Glasgow and Dundee. The information below has been extracted from the 2016 Tech Nation Report.

Edinburgh is Scotland's leading digital cluster, with key strengths in financial technology (fintech), cyber security, digital marketing and advertising and cloud computing. Edinburgh is also the birthplace of billion dollar companies such as Skyscanner and Fanduel.

Glasgow is an incubator for digital start-ups, with specialities in social networks, e-commerce and fintech.

Dundee is best known for its prominent gaming industry and is home to the internationally recognised Grand Theft Auto. Dundee also has strengths in app and software development, as well as online gambling.

The transition to increased delivery of public services online may enhance accessibility of services to rural and isolated communities and those with mobility difficulties. However, as only 59% of Scottish households with an income of £15,000 per year or less have home internet access marginalised groups may become more excluded from public services. [106]

Resilient digital technologies can enable the provision of cost-effective public services that are designed around the needs of users. Data and other forms of performance information also allow for continuous improvement of services.

Increasing collaborative ICT procurement has resulted in substantial monetary savings across our public bodies. The figures opposite demonstrate our year-on-year savings: [107]

In addition, satisfaction amongst mygov users is high. Over a five month period from September 2015 to February 2016, approximately 73% of users were satisfied with the usefulness of the content. [108]

The increasing use of technology at home and at work means an increased risk of information, operations and finances being stolen, compromised or disrupted. Developing cyber awareness and resilience across Scotland is a key priority.

Figure 4.6 illustrates the security measures that people take to protect themselves when online. It is clear that some measures are used more widely than others, with two-thirds of adults indicating that they avoid opening emails or attachments from unknown people, whilst just under a third said they make sure their mobile phone has up-to-date antivirus software.

Use of the various online security measures varies by age, with those aged 60 and above generally less likely to adopt each of the measures than those in younger age groups. In addition, adults living in the 20% most deprived areas of Scotland were generally less likely than those in the rest of Scotland to adopt each of the security measures and more likely to say that they took none of the suggested actions.

Footnotes
3. Why Does Digital Matter?