Rural Scotland Key Facts compares and contrasts circumstances in remote and accessible rural areas to the rest of Scotland. The Scottish Government acknowledges that key areas of policy such as the economy, transport, education and health can have a particular impact on rural communities, and seeks to reflect this in mainstream policy development.

The purpose of this booklet is to summarise key facts related to the main policy areas and to inform mainstreaming of rural policies. Improving the evidence base will assist us in understanding the issues affecting rural Scotland.

Rural Scotland Key Facts is a compendium publication and presents a collation of statistics from a range of surveys and administrative databases. A full list of these can be found in the Sources section at the back of this booklet. This booklet presents a snapshot of the latest statistics available at the time of publication.

The publication contains results from several statistical surveys, which are based on samples of households or the population. As such, small differences in results between years or between the geographic areas may not be statistically significant.

Summary of the key messages

Rural Scotland is a ‘Very Good’ Place to Live

In terms of travel and access to services, more people in rural areas are outwith a reasonable drive time to key services (e.g. GPs and shops) compared to the rest of Scotland and fewer people are satisfied with the quality of the public transport services delivered. Residents of rural Scotland spend more a month on fuel for cars, with around half of residents reporting to spend over £100 a month in 2017, compared to 38% in the rest of Scotland.

The rates of emergency and cancer admissions to hospital are lower in rural Scotland, however this may be due to an increased difficulty in accessing hospitals. A lower proportion of people living in rural Scotland, compared to the rest of Scotland, state that the nearest hospital outpatients department is either very or fairly convenient.

With regards to the economy and jobs, more residents of rural Scotland are in work with employment rates higher than in the rest of Scotland. Although unemployment rates are the same across all areas of Scotland at 4%. Residence-based estimates of pay indicate that rates are highest for accessible rural areas. More residents in rural Scotland are self-employed and homeworking is more prevalent.

With respect to housing, the average property is more expensive in rural Scotland. More properties are houses or bungalows and there is a much smaller proportion of flats than in the rest of Scotland. In addition, a higher prevalence of second home ownership, in accessible rural areas in particular, also has an effect on residents’ abilities to access housing.

Use made of the statistics

This publication is widely used to paint a picture of life in rural Scotland and to understand the differences from the rest of Scotland in terms of issues such as demographics, lifestyle, services and the economy.

The statistics presented in Rural Scotland Key Facts are used within the Scottish Government for policy development and monitoring.

A user consultation exercise on the Rural Scotland Key Facts was run from 24th of May to 22nd June 2018, the aim of which was to gather information on users’ needs and wants from the publication and to seek suggestions for new content.

A summary of the findings can be accessed here: https://www.gov.scot/Topics/Statistics/Browse/Agriculture-Fisheries/PubRural/Consultation2018

By analysing drive times to larger settlements we can divide rural Scotland into:

Accessible rural: those with a less than 30 minute drive time to the nearest settlement with a population of 10,000 or more.

Remote rural: those with a greater than 30 minute drive time to the nearest settlement with a population of 10,000 or more.

A high resolution version of the map can be found here: https://www.gov.scot/Publications/2018/03/6040/downloads 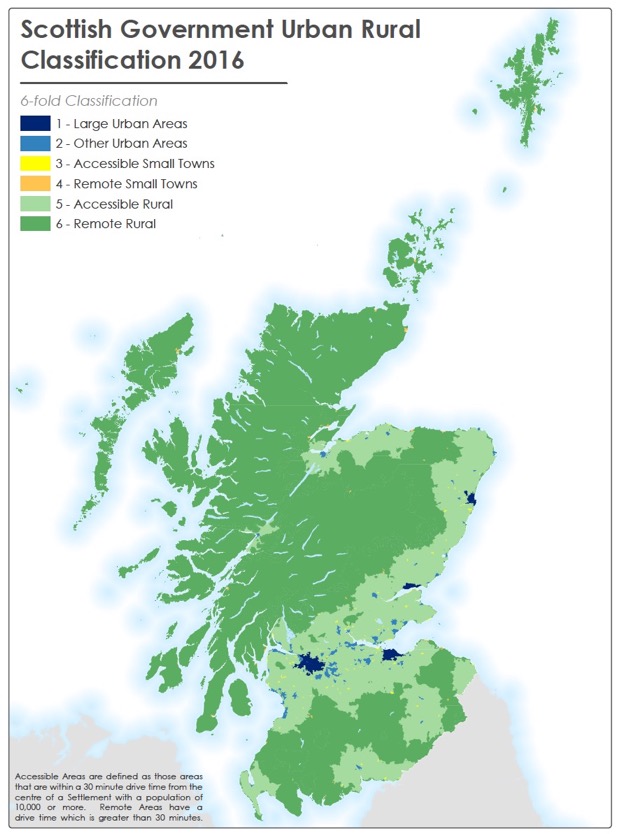