The Nomenclature of Units for Territorial Statistics (NUTS) is a set of geographical boundaries set and regulated by the European Union. The core purpose of NUTS boundaries is the reporting of regional statistics to Eurostat, however those statistics are often used to inform regional policy development and determine regional funding allocations.

Eurostat are carrying out a review of NUTS boundaries. The purpose of this consultation is to help inform the Scottish Government's response to this review and to ensure that stakeholders views are taken into account before submitting proposals.

The NUTS geography is a hierarchical geography with 3 levels. NUTS 1 is the highest level of the NUTS geography and Scotland is a NUTS 1 region. NUTS levels 2 and 3 are sub-divisions of Scotland and should align to local administrative boundaries. Maps 1 and 2 on the following pages show the current boundaries of NUTS 2 and 3 regions respectively.

The Scottish Government will only be submitting proposals for changes to NUTS 2 and 3 boundaries.

There are four NUTS 2 areas and 23 NUTS 3 areas in Scotland. Article 3 (2)[1] of the NUTS regulation, 2003 outlines the population thresholds for each NUTS level (NUTS 2: 800,000-3,000,000, NUTS 3: 150,000-800,000). The population ranges are guidelines only and Article 3 (5)[1] states that individual non administrative units may deviate from these thresholds because of particular geographical, socio-economic, historical, cultural or environmental circumstances.

The current UK NUTS structure was established in 1998 following an extensive consultation exercise two years earlier. All NUTS areas across Europe are reviewed regularly (normally every three years), with the last review taking place in 2010.

Changes made as part of this review will come into force on the 1st January 2015, but will not impact on the allocation of structural funds until 2021.

Responses to this consultation are invited by Thursday, 10 January 2013. 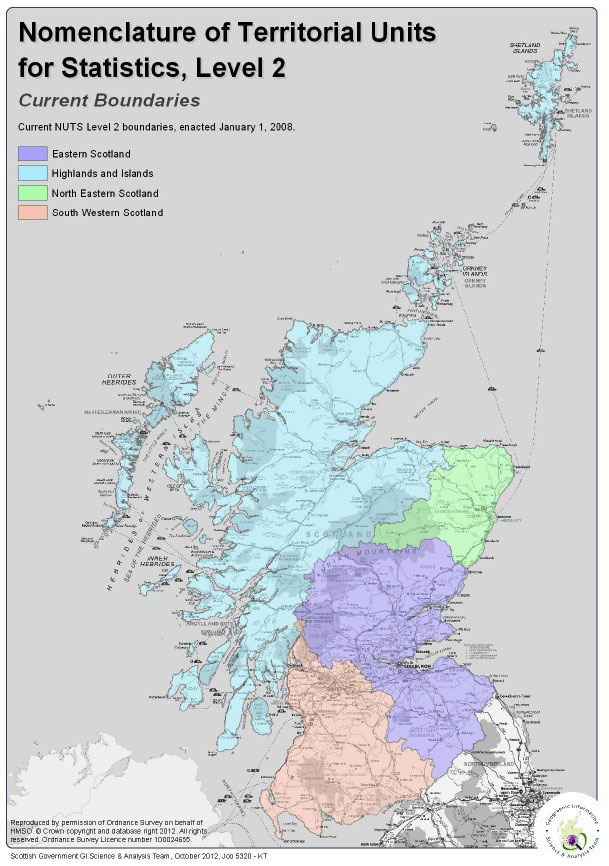 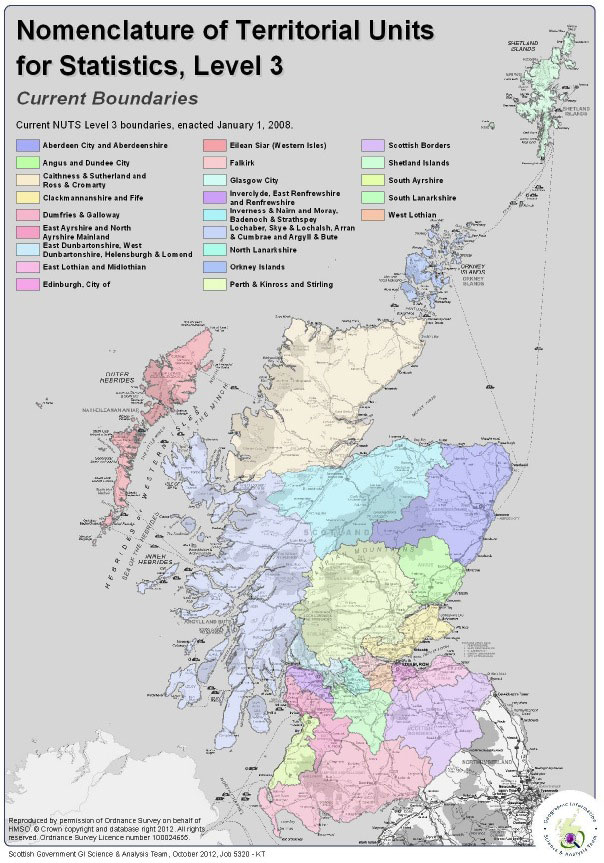 A number of statistical issues need to be balanced when reviewing NUTS boundaries: data availability, data protection, comparability across areas and stability over time.

All Member States have to report on a range of regional statistics to the EU on NUTS boundaries. In many cases, this is a legislative requirement, in other cases this is an ESS (European Statistical System) Agreement. ESS agreements are voluntary and there is no obligation on the UK to sign up to them, however, once signed there is an obligation to co-operate with them as part of wider EU obligations. Table 1 provides an overview of the statistical reporting requirements of Eurostat.

If any changes are made to NUTS boundaries, the Member State must also provide a back series on the new boundaries within two years of them coming into force. The length of the back series will be agreed between Eurostat and the administration responsible for the statistics.

Due to the regulatory requirements to provide data at NUTS 2 and 3 level, it is essential that any proposed boundary changes allow data suppliers to meet their reporting requirements.

Misaligned geographical boundaries can result in a disclosure risk, in particular disclosure by deduction. This occurs when statistics are reported on two very similar, but slightly different areas and it is possible to subtract one set of figures from another to calculate statistics on the small area where the geographies do not align. This increases the risk of an individual or household being identified and in order to mitigate this risk, data are withheld or distorted, so aligning to Local Authority boundaries will increase the availability and quality of data supplied on NUTS regions.

€780 Million of Structural Funds were allocated over 7 years (from 2007 to 2013) to NUTS 2 regions in Scotland. Changing the boundaries of these regions may, in the long term, affect the levels of support different areas are eligible for, as Structural Funds are distributed based on GDP per capita in each NUTS 2 region and changing the boundaries could change the figures. All areas of Scotland except the NUTS 2 Highlands & Islands (H&I) region are currently in the least intensively supported category.

The NUTS 2 and NUTS 3 areas are also used to set eligibility for Regional Selective Assistance under the European Union's Regional Aid Guidelines, a policy which spends on average £50 million through SE and HIE per annum, and which creates roughly 6,500 jobs per year in Scotland. Changes to NUTS boundaries should not materially affect Scotland's Assisted Areas Map as we already select areas within NUTS 2 and 3 areas.

(i) Administrative change (for example, local government reorganisation) that affects the existing NUTS structure. Member States are asked to amend NUTS areas so that they reflect current administrative areas.

(ii) Non-administrative change. Eurostat advise Member States to balance out the principles of increasing comparability between regions with retaining stability to preserve time series. Any changes proposed must respect the population thresholds (below) and reduce the standard deviation[2] of the size (in terms of population) of all EU territorial units for the NUTS level.

Eurostat have asked us to consider merging the Highlands & Islands with the North Eastern Scotland NUTS 2 area so that all areas within Scotland have populations within their recommended thresholds. The Scottish Government is not in favour of this change and will request that these areas should be allowed to deviate from those thresholds due to their unique geographical, socio-economic and cultural circumstances (Article 3 (5) of the NUTS Regulations).

The Scottish Government plan to submit proposals based on administrative change. We propose to align NUTS boundaries to current Local Authority boundaries, while making minimal changes beyond that. At NUTS 2 level, this would involve the following changes:

Map 3 highlights the areas that would be affected by these changes. 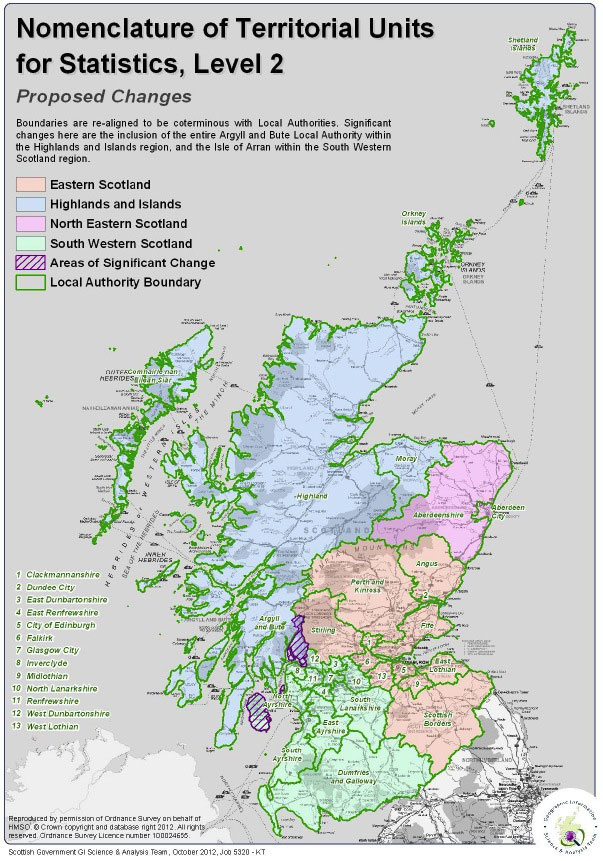 The Scottish Government's proposals for NUTS 3 regions are to align to Local Authority boundaries. This requires slightly more changes to the boundaries than at NUTS 2 level, but would leave much of the South and East of Scotland unaffected:

Map 4 below shows the areas affected by these proposals.

Eurostat have suggested that Moray could be combined with Argyll & Bute to create a non-contiguous NUTS3 area that complies with their population thresholds. Although non-contiguity is acceptable to Eurostat, the Scottish Government is not in favour of such an approach and plan to request an exception under Article 3 (5) of the NUTS Regulations. 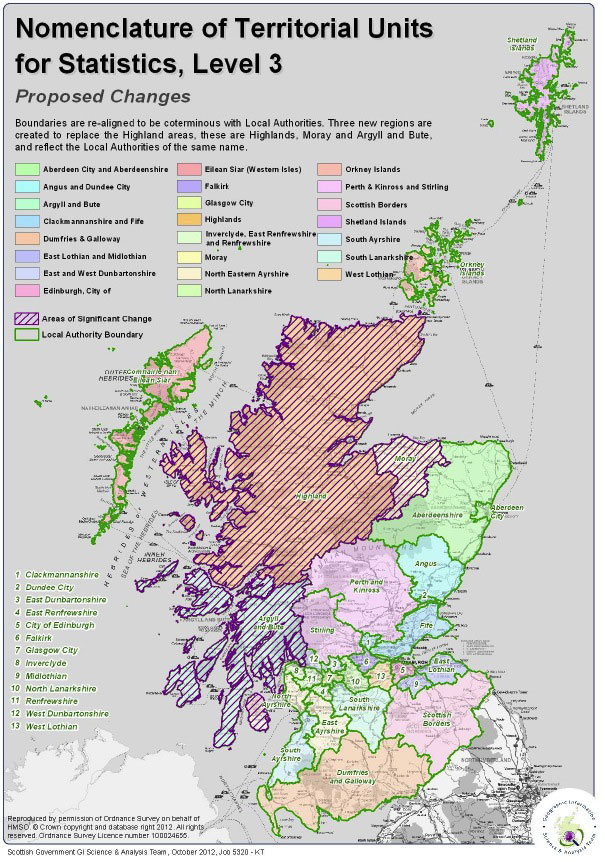