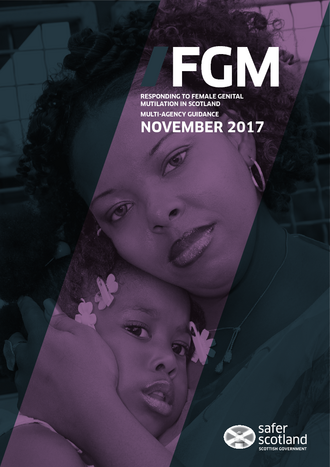 FGM is a form of child abuse and violence against women. It is a deeply harmful practice which violates the human rights of girls and women. It can significantly affect their physical, sexual and mental health and wellbeing for life.

This guidance on FGM provides a clear and consistent approach across all agencies and areas.

In accordance with the National Guidance for Child Protection in Scotland (2014) and The Children and Young People (Scotland) Act 2014 this guidance defines a child as a person under 18 years of age.

The priority is always to ensure that a vulnerable young person who is, or may be, at risk of FGM is offered support and protection. The age of the person concerned should not be a barrier to an inter-agency discussion taking place. A response proportionate to the level of risk is essential.

Getting It Right for Every Child (GIRFEC) [6] requires practitioners to meet children and young people’s wellbeing needs. This includes agencies working together when necessary.

Agencies should always consider local adult support and protection arrangements. Individuals with a learning disability, cognitive impairment and/or mental health problems are particularly vulnerable to abuse. Agencies should take account of both child protection and adult protection procedures when considering 16- and 17-year-olds.

The safety and wellbeing of women and girls is a key priority for the Scottish Government. Preventing and ending FGM is part of that.

The Scottish Government recognises that communities and individuals affected by FGM must be at the heart of work to change the attitudes and practices behind it. Long-term change requires sustained commitment from all partners.

The Scottish Government is working to prevent FGM, and to improve identification and response. In 2014, it funded the Scottish Refugee Council to research communities affected by FGM in Scotland and models of intervention. The subsequent report Tackling Female Genital Mutilation in Scotland: a Scottish model of intervention (2014) [7] is informing the national approach.

The World Health Organization ( WHO) defines FGM as ‘all procedures involving partial or total removal of the female external genitalia or other injury to the female genital organs for non-medical reasons’.

FGM has no health benefits. It harms girls and women in many ways, and is frequently very traumatic and violent for women and girls.

WHO [9] classifies the practice into four types:

Female genital mutilation ( FGM) is an internationally-recognised term. It conveys the severe harm it causes to women and girls. However, women affected by FGM may not describe themselves as ‘mutilated’ and may not recognise the term ‘ FGM’. Although ‘ FGM’ or ‘cutting’ are common terms, they are not universally understood because they are English words.

Practitioners and agencies should understand the severe harm which FGM causes but mirror a woman’s own description of her experience. For example, she may use other words such as ‘cutting’ or ‘circumcision’. The term ‘female circumcision’ is unfortunate because it is anatomically incorrect and also misleading.

FGM can have multiple and severe consequences for physical and mental health in the short-term and throughout a woman’s life.

Women may experience recurrent sexual, psychological and physiological problems. They are likely to require specialist surgical and psychological interventions during pregnancy and childbirth. WHO data show that, compared to women who have not undergone FGM, those subjected to any type of FGM have increased complications in childbirth, worsening with Type III (infibulation).

FGM has been practised across different continents, countries, communities and belief systems for over 5,000 years. This includes Europe, America, Asia, the Middle East and central Africa from the west coast to the Horn of Africa, where it is most concentrated today.

The worldwide movement of people means that FGM is found in communities all over the world, including Europe.

While the exact number is unknown, at least 200 million girls and women in 30 countries have undergone FGM [14] . Since certain groups and diaspora communities continue the practice in other countries as well, the total number of girls and women worldwide who have undergone FGM is likely to be higher. The actual figure is not known because there are little reliable data on prevalence in these population groups.

Whilst survivors of FGM are found in some communities in Scotland, not all women and girls born in countries or communities where it is practised are affected or at risk. There is no concrete evidence that FGM is actually being practised in Scotland, but neither is there clear evidence that it is not. Prevalence rates vary dramatically both within countries of origin and between them, so it is important not to make any assumptions about women or girls from a particular background or community.

In its report, Tackling FGM in Scotland: towards a Scottish model of intervention (2014) [15] , the Scottish Refugee Council analysed census, birth register and other data in an attempt to estimate the size and location of communities in Scotland which might be affected by FGM. It found that:

There are no data on ethnicity or other variables which influence the practice of FGM in local communities, so it is not known how many people in those communities are directly affected.

The map in Appendix 3 shows where FGM is most prevalent in Africa and the Middle East. National prevalence rates often mask regional differences. UNICEF [16] noted significant variance within countries, with FGM concentrated in specific areas/communities.

When, how and why FGM is practised

The age at which girls undergo FGM varies in different communities – from soon after birth to young adult. FGM is usually performed by older women, for whom it can be a lucrative source of income and prestige. They often perform FGM without medical expertise, anaesthesia or attention to hygiene.

In some communities, health professionals are performing FGM because they think that, if they do it, it will protect women from infection and pain. However, all international groups, including WHO, condemn this [17] .

The practice of FGM is complex. Despite the harm it causes, many women think it is in the best interests of their daughters for reasons of faith, chastity, status, honour, marriageability, belonging, tradition, cleanliness or desirability.

FGM is often linked to sexuality and marriageability and performed to ‘control’ young women’s sexuality. Although both secular and faith communities practise FGM, it is often claimed as a religious practice. But no religion condones it and faith leaders have condemned it [18] . In some communities, women who oppose FGM or who try to protect their daughters from it are abused or ostracised, and their daughters shunned or stigmatised.

FGM and the law

FGM contravenes human and women’s rights under various international treaties. It has been recognised as a form of gender-related persecution under the 1951 Refugee Convention [19] on the grounds of political opinion, membership of a particular social group or religious beliefs, and may, therefore, form the basis of a successful asylum claim. It is mentioned as an example of persecution based on membership of a particular social group in the EU Qualification Directive [20] . It also constitutes ‘serious harm’ in the context of the qualification for subsidiary protection within this directive.

The Law in Scotland

The legislation also makes it an offence for a person to aid, abet, counsel, procure or incite:

The penalty on conviction on indictment is up to 14 years’ imprisonment.

The 2005 Act allows an approved person to carry out a surgical operation on someone if necessary for the latter’s physical or mental health, or on a woman in labour or who has just given birth, for reasons connected with the birth (see Appendix 1).

If a child has been a victim of FGM, or is at risk of becoming a victim of FGM, (for example, she lives in the same household as a victim of FGM or as a person who has previously committed an offence involving FGM) then she can be referred to the Reporter to the Children’s Hearing. The police, the local authority, health services, schools or by any other person or agency who has concerns about the child can refer her. The court has a specific power to refer affected children if someone has been convicted by that court of an offence which involves FGM.

Local authorities are subject to a particular responsibility under section 60 of the Children’s Hearings (Scotland) Act 2011 [22] . If they think it likely that (i) a child requires protection, guidance, treatment or control, and (ii) that it might be necessary for a compulsory supervision order to be made for the child, then they must make all necessary inquiries into the child’s circumstances. If, following those investigations, the local authority thinks that (i) and (ii) apply, then they must make a referral to the Reporter. The police are subject to a similar duty under section 61 of the 2011 Act.

Law in England and Wales

The law on FGM in England and Wales differs from that of Scotland. Reporting within the media, and the publication of English and Welsh guidance, may overlook this distinction, leading to confusion about policy and practice. To clarify: in 2015 the UK Parliament passed the Serious Crime Act which introduced additional provisions on FGM including mandatory reporting, FGM Protection Orders and statutory multi-agency guidance. These requirements apply only in England and Wales. There is more information about this and about international law in Appendix 1.