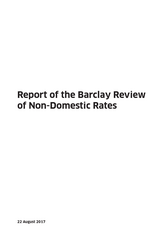 1. For example, the OECD tax database shows that as a % of GDP, and the UK and France are the countries with the largest tax burden, at 4% https://data.oecd.org/tax/tax-on-property.htm.

By looking at Government Expenditure & Revenue Scotland data ( http://www.gov.scot/Topics/Statistics/Browse/Economy/GERS - due to be updated on August 23) - it is possible to confirm that non-domestic rate accounts for a similar proportion of UK GDP as it does Scottish GDP.

2. Data and analysis available at the World Bank's doing business website: http://www.doingbusiness.org/, provides a more detailed breakdown of these factors. The 14 th edition of 'Doing Business' provides a summary of the performance of the UK economy in these indicators on page 248 ( http://www.doingbusiness.org/~/media/WBG/DoingBusiness/Documents/Annual-Reports/English/DB17-Report.pdf)

3. In some cases, where there is not a straightforward evidence base to determine market rental value, the local Assessor will use a more complicated method to estimate rateable values. Where there is a need to employ a more complex method, the local Assessor will follow the relevant practice note, which are published on the Scottish Assessors Association website: https://www.saa.gov.uk/non-domestic-valuation/draft-2017-practice-notes/

4. Certain charities may only receive an 80% reduction in their bill if the relevant council does not decide to award "discretionary" rates relief.

5. Changes in the tax rate at revaluation should also account for inflation and likely appeals loss. This is set out for England in legislation at: http://www.legislation.gov.uk/ukpga/1988/41/schedule/7. Scottish Ministers are not bound by this legislation, but have matched English tax rates at both of the past two revaluations. Note that the legislation specifically references September RPI, which can differ from the levels of RPI seen over the financial year (April to April) which are described in Table 5.

9. Should a large ratepayer locate in a council area the council may benefit from a share of the increased revenue with the Scottish Government under the Business Rates Incentivisation Scheme ( BRIS). However, the BRIS is relatively small, typically accounting for around 0.1% of total revenues, and thus any incentivisation it provides is limited.

11. In practice, "Other" relief expenditure was affected by the introduction of New Start, Fresh Start, and Enterprise Areas, however the affect these reliefs had on the overall trends was far less impactful.

12. For an introduction to the key issues, The Economist provided a useful introduction in January 2011 - link. Oxera produced a breakdown of the different components driving the difference between the two measures: (Oxera, "What is the forecast difference between RPI and CPI?", May 2014, link, table 4.2), and the Paul Johnson led review of Inflation Indexes for the ONS provides a comprehensive summary of the differences, together with recommendations on which measure government should use: Paul Johnson (Director of the IFS) led an independent review of inflation measures ( link)

12. Referred to as a multiplier in England.

14. CPIH is a relatively new measure of inflation - introduced in 2013. The key difference between CPI and CPIH is that the latter includes a includes a measure of owner occupiers' housing costs - this will include mortgage payments, but also dwelling insurance, estate agents' fees and maintenance and/or renovation costs.

15. Notably, Paul Johnson (Director of the IFS) led an independent review of inflation measures ( https://www.statisticsauthority.gov.uk/news/uk-consumer-price-statistics-a-review/) which reported in 2015 - recommending that "The Office for National Statistics ( ONS) should move towards making the Consumer Prices Index including owner occupiers' housing costs ( CPIH) its main measure of inflation"

16. As discussed earlier, the setting of the small business multiplier in England is determined in Legislation ( http://www.legislation.gov.uk/ukpga/1988/41/schedule/7). In practice this does not mean that revenues will be the same before and after a revaluation. Revenues will move in line with inflation, any buoyancy in the tax base, and the profile of revenues will be affected by the appeals process.

18. Legislation provides that certain utilities are valued at a national (Scotland) level by designated assessors. These 'designated utilities' are typically large utility companies whose property is valued on a nationwide basis.

19. For a discussion of the revenue costs of past Transitional Relief schemes, see the policy costing associated with the 2016 UK Government Autumn Statements, contained within para B.5 and Table B.1: https://www.gov.uk/government/uploads/system/uploads/attachment_data/file/571402/Policy_Costings_AS_2016_web_final.pdf

21. The methodology is outline by the SAA in a "practice note" which describes the key elements of valuing hotels and accommodation subjects: https://www.saa.gov.uk/wp-content/uploads/2017/04/Hotels-Accommodation-Subjects_R2017_CPC20.pdf

22. The Department for Local Government and Communities produced a 'plain English' guide to rates retention and the interaction with the Local Government Finance Settlement in 2013. It is available at https://www.gov.uk/government/uploads/system/uploads/attachment_data/file/78784/130206_Plain_English_Guide_-_Business_rates_retention_and_the_local_government_finance_settlement.pdf. In addition there is a large amount of discussion or Rates Retention from key stakeholders such as the Institute for Fiscal Studies, National Audit Office etc.