2. THE IMPACT OF the ALLIANCE

2.1 This section of the report considers the changes that the ALLIANCE has brought about, and the impact it has had as an organisation. It mainly provides an analysis of the views expressed by stakeholders. These were gathered through the member survey (completed by 99 ALLIANCE members) as well as qualitative interviews with: members (13); the Scottish Government and Joint Improvement Team (11); and policy stakeholders (9). This section also provides a high level analysis of existing evaluation in relation to the Self Management IMPACT Fund (the grant programme which the ALLIANCE manages on behalf of the Scottish Government).

2.2 The ALLIANCE strives to ensure that its members’ views are gathered and heard, and our research suggests that the ALLIANCE is doing this very well.

Members are involved in a range of ways

2.3 Respondents to the member survey indicated that they have been engaged by the ALLIANCE in a range of ways, with the vast majority feeling the ALLIANCE gathered views from all its members effectively. We found:

2.5 This finding was further supported by the comments individual members made during the survey and interviews.

“The ALLIANCE . . . helps by raising awareness of long-term conditions, and lobbying for organisations.”
Professional associate

“The ALLIANCE has argued a good case for our sector. It has encouraged government to invest in the third sector.”
Large sized member organisation

2.6 Also important was the promotion of self management, which survey respondents felt the ALLIANCE had successfully placed on the Government agenda.

Providing a voice for people with lived experience

2.7 Members were extremely positive about the ALLIANCE’s ability to provide a voice for disabled people and those with long-term conditions. Ninety-five per cent of respondents to the survey said that the ALLIANCE was effective at providing a voice for this group. Smaller member organisations highlighted that they have become known to the Government through ALLIANCE activity and this has raised their profile and benefited them and their service users.

[What does the ALLIANCE do well?] “Communicating people's needs to the Government.”
Medium sized member organisation

2.8 Critically, all stakeholder groups felt that the ALLIANCE had gone beyond effectively representing member views, actually to influencing and shaping national policy – particularly in relation to self management, person centred approaches and the role of the third sector in health and social care.

2.9 Members felt strongly that the ALLIANCE had strengthened the voice of disabled people and people with long-term conditions in the development of national policy: 96% said they had at least some impact in this area, with 54% indicating a significant impact.

2.10 When asked what had been the ALLIANCE’s biggest achievement in recent years, members were most likely to comment on the role it had played in strengthening the voice of the third sector in national policy making.

“They strengthen the voice of disabled people and people with long-term conditions in the development of national policy.”
Member organisation, size not recorded

2.11 Policy stakeholders and sponsorship representatives also emphasised the significant impact the ALLIANCE has had in strengthening the third sector voice in policy making.

“The ALLIANCE provides an ability to work with the third sector and have their views heard.”
Policy stakeholder

2.13 In addition, several policy stakeholders and a number of sponsorship stakeholders felt the ALLIANCE had had its most significant impact in raising the profile of person centred approaches with policy makers.

2.14 Policy stakeholders and sponsorship representatives identified key characteristics in the ALLIANCE’s approach which they suggested had enabled it to have had such a significant impact in policy terms. In particular, they suggested the ALLIANCE had:

“They (the ALLIANCE) have been successful in getting among the health policies as well as social care policy and fighting for the rights of individuals.”
Policy stakeholder

2.15 A key area of impact the ALLIANCE has had on its members relates to sharing and disseminating information. We found that:

“It keeps everyone informed at all times.”
Small sized member organisation

“The ALLIANCE is always ready to answer any questions, information is readily available and it is very accessible.”
Small sized member organisation

2.16 The ALLIANCE was praised by members for providing support which allowed members to develop their skills, knowledge, and organisational capacity. We found:

“The support that the ALLIANCE provides its members and those who are funded by them is invaluable.”
Medium sized member organisation

“In my opinion the ALLIANCE does an excellent job of supporting third sector organisations like mine with support in a multitude of different ways.”
Member organisation, size not recorded

2.17 The Hub is a resource for use by ALLIANCE members. It is located in the ALLIANCE offices in Glasgow city centre and provides meeting and training rooms for hire, computing equipment, hot-desking facilities and PA systems.

2.18 Members can book the facilities and are charged according to the size of their organisation. Members were generally positive about the Hub. We found that:

“I think the Hub is an incredible resource and I am very grateful for it.”

A person with lived experience of long-term conditions or disability

2.19 This review has primarily focused on gathering views from stakeholders about the impact of the ALLIANCE at an organisational level. The diagram below sets out how ALLIANCE programmes, activities and reports directly relate to its aims and the Scottish Government’s 2020 Vision for Health and Social Care. 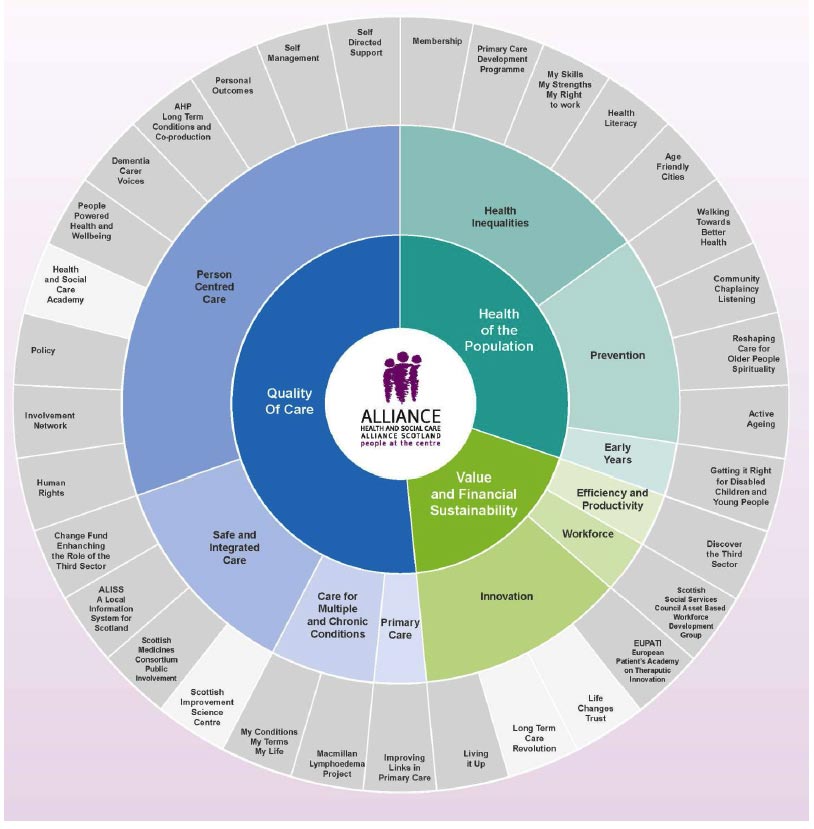 2.20 The following sub-sections provide information on the intended impact of the ALLIANCE’s key programmes, evidence on the impact of the Self Management IMPACT Fund, and recent reported achievements.

2.21 Here we provide an overview of the main intended impacts of key ALLIANCE programmes.

2.22 The ALLIANCE now operates a number of projects and programmes supported by the Scottish Government. The table below lists the projects, funding amounts and timescales, and gives a brief overview of their focus.

Table 2.1 Overview of the main programmes supported by the Scottish Government [2]

2.23 The ALLIANCE undertakes a very wide range of work, as part of its core activities. Here we highlight some of the key achievements the ALLIANCE has recently reported [4] .

2.24 The ALLIANCE has been actively involved in the development of national and European policy. In collaboration with others, it has worked to represent member views, and improve approaches and legislation. Reported achievements during 2013 included:

2.25 The ALLIANCE regularly works with other organisations at a national and local level to develop support and resources to inform those who provide services and those who use them. In addition to managing the Self Management IMPACT Fund, reported achievements during 2013 included:

The Self Management IMPACT Fund

2.26 The ALLIANCE administers the Self Management IMPACT Fund on behalf of the Scottish Government. This grant programme covers the period 2013-14 to 2015-16. It builds on the learning of the previous Self Management Fund which ran during 2009-10 and 2010-11 and invested £4 million in 81 self management projects across Scotland.

2.27 The Self Management IMPACT Fund allows third sector organisations and partnerships to develop and strengthen new project ideas that support self management as well as building on existing approaches.

2.28 The ALLIANCE provides support and advice to organisations receiving funding. It has worked closely with Evaluation Support Scotland to support projects to evaluate their impact in an outcomes-focused way.

2.29 During the survey and in interviews we explored member views about the impact of the Self Management IMPACT Fund, and the ALLIANCE’s associated support activities. We engaged with seventeen funding recipients through the survey and four during telephone interviews.

2.30 Members we spoke with about the fund were positive about the ALLIANCE’s approach to managing the fund. When asked during the survey to rate the extent to which the ALLIANCE performed this role effectively, the majority of members responding to this question indicated it was very effective (63%) or effective (27%).

2.31 In addition, the support provided by the ALLIANCE was viewed positively by the small number of selected members we spoke with. They told us about how supportive the ALLIANCE had been during the application stage and the ease with which the application could be submitted. Members also spoke of an open dialogue between themselves and the ALLIANCE in relation to their funding options. Some members talked about having worked directly with staff at Evaluation Support Scotland. They received advice and support with monitoring and evaluation – and this was highly valued.

“The ALLIANCE is unlike other funders. They will sit down and meet with organisations and discuss the suitability of the fund. It’s a very open process and not many funders do that.”
Small sized member organisation

“By undertaking the evaluation with support from Evaluation Support Scotland, we were able to evidence the impact of our service.”
Large sized member organisation

The impact of the fund

2.32 A number of special reports have been prepared which demonstrate the impact of the Self Management IMPACT Fund on the individual organisations or groups it supports. These special reports set out outcomes-focused case studies. They suggest that the fund has:

Other views about the fund

2.33 During telephone interviews members reinforced the impacts explored through the existing evaluation work. In particular, small organisations spoke of being able to ‘grow and develop’ as a result of the fund.

“It has acted as leverage for other funding and partnerships because of the credibility of being linked with the ALLIANCE. It stands you in good stead.”
Small sized member organisation

“It has made a tremendous difference, and allowed us to concentrate on the organisation.”
Small sized member organisation

2.34 The fact that the Self Management IMPACT Fund covered three years was welcomed by some members we spoke with. In comparison to other funding streams, this fund has allowed organisations to develop and deliver their projects in a more ‘reasonable’ time frame.

“Prior to the ALLIANCE, funding was at best bitty....this allowed us time for project development and delivery.”
Small sized member organisation

2.35 Some members who responded to the survey suggested that funding awards should be linked to more specific outcomes.

2.36 Our research suggests that the ALLIANCE has been successful at ensuring its members’ views are gathered and heard.

2.37 Members felt able to contribute their views to the ALLIANCE through different methods, such as consultations, reference groups and research. They thought that the ALLIANCE was effective at collecting the views of its members on relevant policy and delivery issues.

2.38 The ALLIANCE was thought to have a particular strength in raising awareness of long-term conditions and being able to communicate these needs to the Government.

2.39 Members, policy stakeholders and sponsorship representatives were generally very positive about the ALLIANCE’s ability to provide a voice for people with lived experience. Ninety-five percent of respondents to the online survey said that the ALLIANCE was effective at providing a voice for this group.

2.40 All stakeholder groups felt that the ALLIANCE has had a very influential role in shaping policy – particularly in relation to self management, person centred approaches and third sector involvement in health and social care. It was viewed as having supported policy discussions at a national level and taken an integrated approach to health and social care policies.

2.41 Members felt that the ALLIANCE has effectively offered a range of opportunities to hear about policy developments, engage in discussions and consultation processes, and develop knowledge and skills. The members we engaged who used the Hub were generally positive about its facilities.

2.43 The ALLIANCE has also delivered a range of activities to support people who deliver services and those who receive them. This includes working with a range of other organisations to develop publications, resources, events and direct support programmes.

2.44 Existing evidence and the views of members suggests that the Self Management Impact Fund has provided opportunities for organisations to develop new and existing programmes, and to demonstrate the value of these.