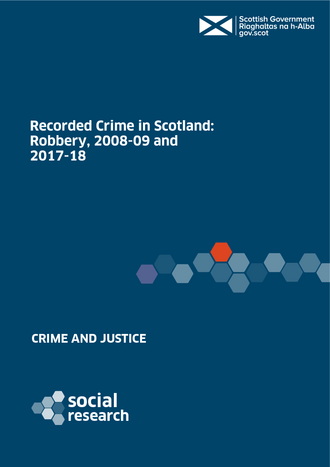 Robbery is where someone has been physically assaulted or verbally threatened by a perpetrator, with our without a weapon, in order to gain or attempt to gain property. This study into the characteristics of police recorded robbery focused on the years of 2008-09 and 2017-18, the time between which saw robberies in Scotland decrease by 47% or 1,407 crimes (from 2,963 to 1,556).

The vast majority (87%) of the total fall in police recorded robbery between 2008-09 and 2017-18 was due to fewer cases of victims being robbed in public spaces by strangers. The reduction in the number of those cases with a male victim was much larger than the reduction in cases with a female victim, though this might be expected as almost three-quarters (71%) of robbery victims were male in 2008-09.

Other types of robbery, such as robbery in a private space (like a residential property) or where the victim knew the perpetrator, have not noticeably reduced in volume since 2008-09. As such they had very little impact on the total fall in police recorded robbery over the past ten years.

Although the reduction in strangers committing public space robberies has driven the total fall in robbery since 2008-09, these factors still predominate the nature of robbery committed today – with 75% of robbery in 2017-18 happening in a public space and 63% being carried out by a stranger. Males still make up a majority of victims (60%).

However, as the fall in police recorded robbery over the past 10 years was driven by fewer public space robberies committed by strangers, robberies in private spaces or committed by someone known to the victim made up a greater proportion of robbery in 2017-18 than in 2008-09.

This suggests that whilst the police in Scotland face far fewer reports of robbery today than a decade ago, the characteristics of the smaller number of robberies that remain are now less homogenous.

The study also found that the average age of both a victim and perpetrator of robbery in 2017-18 was several years older than their counterparts from 2008-09. This reflected a particularly large fall in the estimated rate of both victimisation and offending for teenagers (aged 13 to 19 years) and people in their twenties.