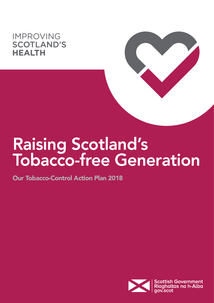 1. Achieving a reduction in smoking rates to five per cent or less by 2034 remains our key objective.

2. Fewer people than ever are taking up smoking now in Scotland. Smoking rates in school-age children have fallen [3] to an all-time low and the proportion of our overall population who smoke continues to decline [4] . In 2013 we passed a significant milestone when the number of ex-smokers outnumbered the number of smokers for the first time [5] . The proportion of non-smokers in Scotland who are exposed to second-hand smoke has fallen significantly since we started measuring it in 1998. Together, we have made important progress in achieving these outcomes.

3. However, there is much progress still to make.

4. Smoking continues to be the greatest threat to public health in Scotland by some margin. Smoking is the cause of around one in five of all deaths and kills two in every three long-term smokers. Smoking is known to have a huge impact on the effectiveness of medications, including those prescribed for mental health conditions. It remains the most significant cause of preventable cancer and contributes to much of Scotland’s cardio-vascular and pulmonary health problems. Smoking not only creates health inequality, but the financial cost to smokers contributes to social and economic inequalities as well. Taking up smoking is likely to be the single biggest risk to most people’s health and life-expectancy. Giving up smoking is the most important thing any smoker can do to improve their own and others’ health and their life expectancy.

5. The facts about the progress we have all made and tobacco’s continuing threat to us are all readily available. But perhaps because these facts have been heard by so many people, we now face a growing challenge to keep presenting these in a way that will help people fully understand the on-going significance of the messages.

6. This tobacco control action plan builds on what we know works - in helping people understand the messages about ambition, success, and drivers for positive change as well as the evidence about risks, harms and consequences.

7. In 2013 we set out an ambition to create a tobacco-free generation – so that when children born in 2013 reached age 21 their generation would be tobacco-free. Five years on, those same children will be starting school. We know that the school environment has been improving since they were born: smoking is not accepted in school; fewer children at school-age smoke; health and wellbeing education includes messages about the harms of smoking; some schools have signed up to be tobacco-free; and many schools have smoke-free grounds. We also know that these children are less likely to be exposed to second hand smoke in their homes - as parents who smoke continue to “take it right outside”. Given the decline in smoking rates and the age profile of current smokers, it’s likely that fewer parents smoke now than in 2013.

8. So our tobacco-free generation remains an ambition we believe we can all help make real.

9. This tobacco control action plan now looks to the next five years to pave the way for their progress through primary school. But we must also start preparing services and guidance to cover their future transition through secondary school and on to apprenticeships, training, further education or work. Smoking rates among people between 16 and 24, where there is a fairly significant rise, will be more of a focus for us now.

10. This Tobacco Control Action Plan is one of five linked public health strategies and plans being published in 2018 by the Scottish Ministers. The other plans cover Alcohol Prevention, Substance Use and Treatment, Diet and Obesity, and Physical Activity.

11. Inactivity, smoking, substance misuse and harmful drinking cannot only be addressed through their own separate strategies. The harms caused by each of these behaviours will often be felt by the same people in Scotland. For example long-term smoking contributes to obesity which increases the risk of developing Type 2 Diabetes. It can also be a barrier to physical activity. Reducing the level of cannabis use in Scotland is likely to help reduce smoking levels and the levels of harms caused by tobacco.

12. There are often links between inactivity, smoking, substance misuse and harmful drinking which complicate how people and health and social care providers prioritise treating outcomes or help make better choices. Our strategies and plans need to recognise the links between them for people and for providers of services.

14. Each of these linked public health strategies and plans will form part of a higher-level new approach to Public Health. This will see the Scottish Government, Scotland’s health service and local government working together on joint public health priorities. In June 2018 the public health priorities were published including the priority which makes it our joined aim to reduce the use and harm from tobacco, alcohol and other drugs.

15. This priority will be central to the work of the proposed joint overarching public health body being set up in 2019.

16. These five public health strategies and plans, together, aim to encourage people to make positive choices about their health, their life and their communities. These strategies also aim to prevent, protect people from, and provide treatment for harms. We know these harms are caused by a range of factors. These could include where they live, their access to good quality housing, the availability of rewarding employment or access to schools and training. Access to support where that is needed is also very important.

17. Health improvement is a key driver in improving public health and has an important part to play in tackling social and health inequalities in Scotland. In 2018 we aim to build on our new approach to public health, with its emphasis on joining services together to maximise the benefits which each can deliver. As a demonstration of our commitment to this, for the first time we are bringing together some of our most vital strategies under a common banner and with a common purpose.

What we have achieved through Creating a Tobacco-free Generation

19. One of the best summaries of what we have achieved in the last five years can be found in the Review of “Creating a tobacco-free generation: A Tobacco Control Strategy for Scotland” published by NHS Health Scotland in partnership with the Public Health Evidence Network and the Scottish Collaboration for Public Health Research and Policy.

21. These actions alongside the introduction of the European Directive on Tobacco Products make up a comprehensive package of measures which will help prevent children from taking up smoking and protect people from the harms of second hand smoke.

22. We have also set smoking cessation targets for NHS Health Boards that aimed to encourage more people from our less well-off communities to use stop-smoking services and make a successful attempt to stop smoking. This policy has led to the sharpest decline in smoking rates coming from our least well off communities.

23. The success of our 2013 strategy and its predecessors can be seen through the significant decline in smoking levels in Scotland. These strategies have been a success. Comparing Scotland with the rest of the UK and with similar countries overseas, smoking rates in Scotland have continued to decline. The latest published figures for smoking rates are for 2016 and so we cannot say this has been true for the full five years since 2013. The analysis of the Annual Population Survey ( APS) [6] provided by the Office for National Statistics provides the most up-to-date UK-wide comparison:

24. However, the trajectory required to achieve our 2034 target challenged Scotland to have reached 17% by 2016. The APS figure of 17.7% is actually lower than the figures we choose to use domestically to measure our own progress. Our 17% target for 2016 was set using data from the Scottish Health Survey and annual monitoring of progress was initially assessed in figures from analysis of the Scottish Household Survey. For figures since 2015 for domestic smoking rates we have moved to using analysis of data collected on smoking from the Scottish Health Survey. We believe this survey to be the best indicator available which takes account of deprivation in Scotland.

25. It is our most conservative means of assessing progress and it confirms that meeting our 2034 target stages will require some real effort along the way. But, most important, we remain committed to achieving the 2034 target of 5% or lower, and we remain committed to achieving the staged targets we set out in the 2013 strategy (see Table 1 of the Annex for the targets). Our next milestone to aim for will be 12% in 2021.

26. When our trajectory towards 2034 was devised we could not have foreseen the significant drop-off in the number of smokers seeking support to quit through our stop-smoking services. Numbers dropped by around 40% over a few years. This has contributed to the relative slow-down in smoking rate decline. This is something we need to address over the next five years.

27. What is encouraging though is that this will be potentially balanced in future years if we maintain the sharp downward trend in smoking rates among 13 and 15-year olds. Smoking at these age groups appears to be at an all-time low (2% and 7% respectively) [7] . This steep drop will not be reflected in national smoking statistics until these young people turn 16. If we can keep a good proportion of young people in this age-group from taking up smoking there is a good chance that we can get back on track on the path to 2034.

28. There have also been many other successes to celebrate over the last five years. One of the most notable successes since 2013 has been the significant reduction in reported exposure to second hand smoke amongst children. Having set a target to reduce reported exposure from 11% to 6% by 2021, that level was achieved in 2015. Reported exposure rose to 7% in 2016 but remains significantly lower than in 2013.

29. Significantly we now have evidence that smoking rates are falling amongst our target priority groups. For example, we have also seen the level of reported smokers amongst pregnant women fall by one per cent in 2016, as well as an increase in the proportion of pregnant women being referred to stop-smoking services.

30. We also have evidence that some of our actions are having more effect in our less well-off communities. The table below is taken from the Scottish Government’s Scottish Surveys Core Questions [8] analysis which looks at the answers to common questions from the Scottish Health Survey, the Scottish Household Survey and the Scottish Crime and Justice Survey.

31. This table shows smoking rates for 2016 by category and shows falls and rises in rates compared to 2015 and 2012. This provides a useful summary of progress since 2012 – using figures from Table 96 from the SSCQ publication for 2016.

32. This action plan builds on the tobacco control strategy published in 2013. The aim of that strategy, to create a tobacco-free generation by 2034, continues through this action plan. Naturally, there are actions from the 2013 strategy which remain as current commitments but which we have not flagged up as new initiatives in this 2018 action plan.

33. The most notable of the on-going actions will be those in the table below which includes a reference number to the corresponding action from the 2013 strategy.