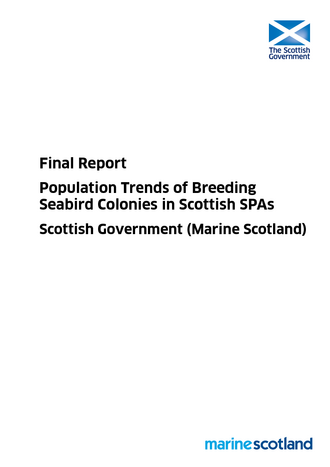 In accordance with the Environmental Impact Assessment ( EIA) and Habitats Regulation Appraisal ( HRA) developers need to consider the impacts of a plan or project on Special Protection Areas ( SPA) populations where there is the potential for an interaction to exist. At present there is no single source of information that identifies the best available population trends of SPA breeding populations to inform this process. As a result there is often inconsistent population estimates with high degrees of uncertainty used in impact assessments. The application of various approaches to EIA and HRA places additional resourcing requirements on Marine Scotland and their statutory nature conservation advisors who will review each approach adopted. To address this issue Marine Scotland commissioned Natural Power Consultants ( NPC) to undertake a review of extant data on SPA breeding populations around the Scottish Coast to:

This review builds upon the outputs of the NPC report "Populations sizes of breeding seabirds in Scottish SPAs" ( NPC, 2012 [1] ) which was delivered as part of Scottish Government work package E. This provided an investigation of the spatial and temporal coverage of colony count data collected at all SPAs. The outputs of the initial report included a 5 year mean using the most recent data, a mean using all data collected since the last national census and a presentation of trends within the data since the last national census. All raw data used are presented within the inital report and are not reproduced here.

The current report presents trends in the data using the most complete time series data available for each designated SPA species. The trend plots are presented below with associated standard errors, arranged by species, for each SPA where there is sufficient data coverage.

It is anticipated that the population trends will help inform the status of designated SPA populations to feed into impact assessments in the context of EIA and HRA during the consenting process for marine renewable projects. It is of key importance to note that the purpose of this collation of data for Marine Scotland is to help inform renewable developers, rather than acting as a specific review of SPAs.

The task was originally to include all features of ' SPAs with marine components'. However, a 'marine component' of an SPA refers to a species that is dependent on a marine habitat, such as a sea inlet, estuary, mud flats, or salt marsh. A total of 119 species of bird are listed by the Joint Nature Conservation Committee ( JNCC) as being dependent on marine environments, including wildfowl, divers, grebes, waders, true seabirds, and certain species that can occupy littoral habitats such as short-eared owl, kingfisher, and twite. Therefore, Marine Scotland focused the work towards species which are more frequently recorded in locations proposed for offshore renewable developments (offshore wind, wave & tidal schemes). The list of species to be considered was restricted to SPA populations of true seabirds (petrels, shearwaters, northern gannet, great cormorants, skuas, gulls, terns, and auks) that rely on marine habitats during the breeding season. The final list of seabird included within the current review comprises of the following species: