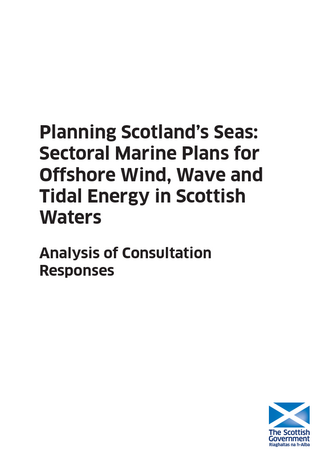 1.1 In 2013, the Scottish Government consulted on a range of marine issues under the Planning Scotland's Seas consultations. Individual consultations looked at:

1.2 This report presents the findings from the responses to the consultation 'Sectoral Marine Plans for Offshore Wind, Wave and Tidal Energy in Scottish Waters Consultation Draft', which outlined Scottish Ministers' proposed spatial policy at the national and regional level for the development of commercial scale offshore renewable energy in Scottish Waters. The draft Plans contained 10 proposed options for offshore wind energy, 10 for tidal energy and 8 for wave energy.

1.3 The Draft Plans Options were subject to Sustainability Appraisal, comprising Strategic Environmental Assessment ( SEA), Habitats Regulations Appraisal ( HRA) and Socio-economic Assessment and the outcomes of these informed the development of the draft. The assessments identified strategic issues relating to shipping, fishing, grid provision and environmental impact that apply in all offshore renewable energy regions around Scotland. There are also significant environmental and cultural issues in certain regions, such as the potential for visual impact and the effects this may have on tourism.

1.6 The 443 campaign responses were submitted by 434 individuals and 9 organisations and all related to the South West region, predominantly opposing the inclusion of the Inner Solway Firth site ( OWSW2) as an area for wind-farm development:

1.7 The 187 standard responses were submitted by 115 individuals and 72 organisations. Of these:

1.8 At question 1 there were generally favourable comments regarding the information and process that was used in developing the Plans. Many more respondents indicated that they agreed than disagreed with the approach used to develop the Plans for Offshore Wind, Wave and Tidal Energy.

1.9 In addition, at question 7, more respondents believed than disputed that an appropriate balance between tackling climate change, maximising opportunities for economic development and dealing with environmental and commercial impacts, had been achieved in the Draft Plans.

1.10 At question 2, there was fairly broad support that the Sustainability Appraisal Report ( SAR) covered all the main social, economic and environmental effects at a high level or in summary form. Nevertheless, respondents recognised gaps in information that had been acknowledged in the SAR, as well as identifying additional issues that should be taken into account in preparing the Final Draft Plans.

1.11 The limitations of existing information and the need for ongoing research and monitoring resulted in many respondents finding it hard to take a clear view on mitigation measures identified in the SEA environmental report or on the impacts on sea users identified in the Socio-economics Report (questions 3 and 4).

1.12 The limitations of available information also resulted in many respondents finding it hard to comment with confidence on the scale and pace of development that could be sustainably accommodated in Scottish waters or the balance achieved in the Draft Plans (question 5).

1.13 A recurring theme was the continuing need for an iterative process as has already been adopted and for ongoing research and monitoring to contribute to regular updates and reviews (question 6).

1.15 In addition to the high volume of campaign responses asking for OWSW2 to be removed from the Plan, 19 standard responses specifically stated at question 11 that one or more Draft Plan options should be removed from the Draft Plans. The main theme from those who commented in standard responses was that caution should be taken, particularly pending further evaluations, research and monitoring.

1.16 There were mixed opinions at question 12 on the optimum frequency of reviewing the Plans once implemented, although more respondents suggested a two yearly review cycle than any other pre-determined frequency.

1.17 Some respondents identified a need for flexibility in the frequency of review and emphasised the importance of reviewing the Plans as new research or information became available.

1.18 A key theme relating to the composition of the Plans Review Steering Group was that a mix of stakeholders should be included.

1.19 At questions 13 and 14, there was praise for the comprehensive nature of the Environmental Report and more respondents expressed broad agreement with the predicted environmental effects than expressed disagreement.

1.20 At question 15, a key theme, once again, relating to the recommendations and proposals for mitigation of environmental effects was that more research and monitoring is required.

1.21 At questions 16 and 17, respondents suggested a number of additional information sources that they felt might be helpful.