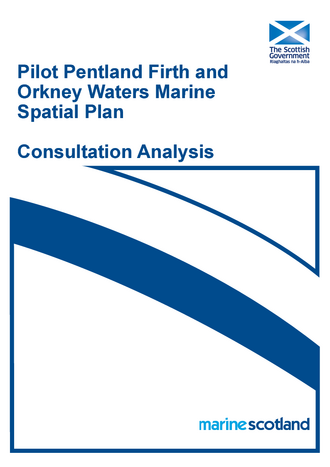 This Consultation Analysis sets out the results of a variety of methods by which respondents could make their views known on two documents that had been prepared as part of the process of developing a pilot Pentland Firth and Orkney Waters Marine Spatial Plan. The documents were a Planning Issues and Options Consultation Paper and a draft Environmental Report, which were published on the Scottish Government website on 17 June 2013 with responses requested by 26 July 2013.

This Consultation Analysis outlines the findings of the formal written comments sent in response to the consultation papers and an analysis of the findings of workshops and drop in sessions held in Kirkwall and Thurso during the week beginning 1 July 2013. The workshops and drop in sessions were organised in collaboration with researchers from the International Centre for Island Technology ( ICIT) at Heriot Watt University who are working on a European Union funded project based on marine spatial planning.

Detailed comments were provided to the consultation and there was wide ranging discussion on a variety of issues at the workshops and drop in sessions. The key findings of the analysis of the responses from these are summarised below (in no order of priority). The respondents felt that the following were all needed to ensure that the Plan was fit for purpose: