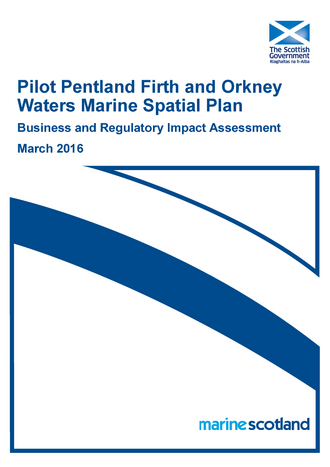 1.1 In 2009 the Marine and Coastal Access Act was published containing provisions aimed at the effective management of the UK marine environment. The Act sets in place the foundation for the adoption by the UK Government of both a marine planning system and a Marine Policy Statement covering UK territorial waters. The UK Marine Policy Statement ( UK MPS) was published and adopted by all UK administrations in 2011.

1.5 The Plan aims to trial the approach that future Marine Planning Partnerships may take in the preparation of suitable policies (including interpreting the policy framework of the NMP within a local context) and the approach that may be taken to governance of Marine Planning Partnerships (including local authority and stakeholder involvement). The pilot Plan is therefore a non-statutory precursor to the Regional Marine Plans. Whilst the pilot Plan does not form part of the statutory marine planning system, it is hoped that it will be used as a material consideration in existing marine management, planning and consenting processes.

1.7 With this background in mind the pilot PFOW MSP has been developed in accordance with the NMP and all preceding legislation with a bearing on marine planning. The pilot PFOW MSP also sits within the international framework for marine planning that includes the United Nations Convention on the Law of the Sea, the European Union Maritime Spatial Planning Directive and various other European Union directives (such as the Marine Strategy Framework Directive).

1.8 The pilot PFOW MSP aims to put in place a non-statutory planning and policy framework in advance of statutory regional marine planning. It is hoped that the development of this Plan will be useful in establishing the basis for two separate Regional Marine Plans for Orkney and North Coast Scottish Marine Regions. Piloting the marine spatial planning process will provide many lessons learnt that will be helpful in informing the preparation of future regional marine plans and the governance arrangements that may underpin future Marine Planning Partnerships.

1.9 In meeting these aims the pilot Plan will be meeting the Scottish Government purpose as outlined in the Government Economic Strategy; to create a more successful country with opportunities for all of Scotland to flourish through increasing sustainable economic growth. It will also contribute to the following national outcomes:

1.11 The Pentland Firth and Orkney Waters are used by a wide range of marine users and for a variety of activities. A vast majority of the Plan area is used for multiple activities and so there is potential for competition and conflict. Whilst the Plan area has been highlighted as a key area for the development of the offshore renewable energy generation industry in Scotland, the Pentland Firth and Orkney Waters also contain a variety of important and rare species as well as a range of internationally important historic sites. The variety of potentially competing uses of the area creates the risk that the marine environment may be mismanaged and damaged with consequences for both the goods and services it provides and the natural and historic heritage of the area. Poor management of the area could result in costs and uncertainty for developers and marine users which could have a negative impact on progress towards fulfilling Scottish Government national outcomes in the area. The NMP (and the policy framework it sits within) has provided for a system of statutory Regional Marine Plans to aid in the management of the marine environment.