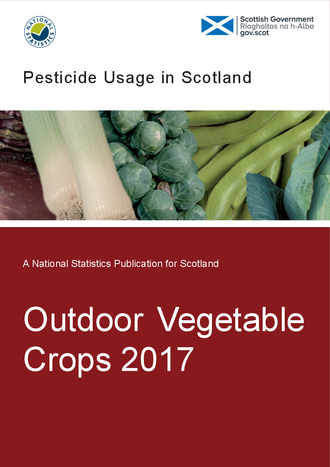 This report presents information from a survey of pesticide use on outdoor vegetable crops grown for human consumption in Scotland during 2017. The crops surveyed included vining peas, broad beans, calabrese, carrots, turnips & swedes and other minor vegetable crops.

Data were collected from a total of 84 holdings, collectively representing 11 per cent of the total vegetable crop area grown. Ratio raising was used to produce estimates of national pesticide usage from sampled data.

Taking into account changes in crop area, the 2017 total pesticide treated area was almost a fifth lower (18 per cent) than that reported in 2015 and six per cent lower than 2013. The weight of pesticides applied to vegetable crops in 2017 was 16 per cent lower than in 2015, but very similar to that encountered in 2013. The application of fungicides, herbicides, insecticides and seed treatments in 2017 decreased from the 2015 survey (21, 20, 19 and 18 per cent decreases in treated area respectively). Only the use of molluscicides increased (37 per cent increase in treated area).