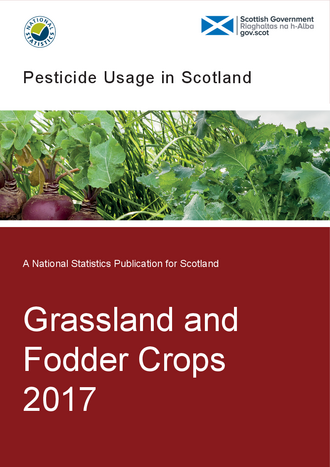 The estimated area of grassland and rough grazing grown in Scotland in 2017 was approximately 4,364,000 hectares, similar to that grown in 2013. Rough grazing accounted for 70 per cent of the total area grown, grass over five years 25 per cent and grass under 5 years, five per cent.

The estimated total area of grassland and rough grazing treated with a pesticide formulation was ca. 87,900 ha (± nine per cent Relative Standard Error, RSE), with a combined weight of 84 tonnes (± ten per cent RSE). Overall these pesticides, almost exclusively herbicides, were applied to four per cent of grassland and less than 0.5 per cent of the rough grazing area. There was little difference in the total area treated, or weight of pesticide applied, to grassland and rough grazing from the previous survey in 2013, but there was a substantial reduction compared to 2009 (ca. one third). The area treated with insecticides, fungicides, seed treatments and growth regulators decreased (99, 41, 37 and 15 per cent respectively), whilst the area treated with herbicides increased (20 per cent).

The estimated total area of fodder crops treated with a pesticide formulation was ca. 24,200 ha (± eight per cent RSE), with a combined weight of eight tonnes (± 15 per cent RSE). Pesticides, primarily herbicides, were applied to 63 per cent of fodder crops. There was 31 per cent decrease in total area treated and a 34 per cent decrease in total weight applied from 2013 to 2017. The application of fungicides, insecticides, herbicides and seed treatments decreased (82, 40, 25 and 14 per cent respectively), whilst the application of molluscicides increased (33 per cent).

Data collected from farmers about their Integrated Pest Management ( IPM) activities showed that farmers were using a variety of IPM methods in relation to risk management and the monitoring and control of insect pests, weeds and diseases.