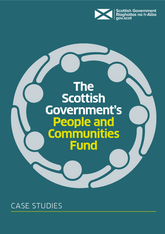 Falkirk Citizens Advice Bureau ( CAB) is a member of Citizens Advice Scotland, a very well known network of charities and voluntary organisations which provides advice to people in their local area on a wide range of issues including: benefits; debt and money issues; consumer issues; work-related problems; housing; and relationships.

“ I don’t know where I would be without this place.”
A beneficiary

The Falkirk Area Welfare Benefits Advice Support Unit (herein referred to as ‘the Falkirk Advice Project’) delivers services in a traditional manner, with a core of staff who deliver advice and one-to-one support to beneficiaries. This is not to say that support is delivered in a standardised manner – the advice and support delivered to each beneficiary is bespoke depending upon their exact needs and cirumstances of the individual.

At the same time, Falkirk CAB maintains strong links with other strategic and local organisations. This includes organisations such as Falkirk Council, Local Housing Associations, Jobcentre Plus, and Alzheimers Scotland, amongst others.

The partner organisations mainly act as referral organisations, either signposting people to take advantage of CAB services, or the CAB referring to partner services. They also act as partners, whereby CAB delivers services on their partners’ premises where people might find it difficult to attend CAB themselves (i.e. nursing homes).

CABs are largely voluntary organisations with a small core of professional staff. Volunteers form the large majority of advisors. Mainly, the volunteers are community members seeking to support a good cause. The volunteers are provided with up to 26 weeks of specialist training to prepare for their role.

The Falkirk Advice Projectworks in partnership with Falkirk, Grangemouth, and Denny and Dunipace CABs, and Falkirk Council to deliver welfare benefit advice to those in need.

A need was identified for extra welfare and benefit support owing to an increase in demand due to recent welfare reforms. Both the mainstream CAB services and Council advice services were overwhelmed with requests for assistance and this was too much for them to handle.

Therefore, the Falkirk Advice Project is designed to complement CAB and Council services, and to specifically support people with particular issues and offer them in-depth support to address their benefit needs. This can often include meeting them in a location where they feel comfortable, such as their home.

In terms of partnership work, one of the major benefits of the Falkirk Advice Project has been the improvement in the relationship and trust between the CAB and Falkirk Council through working and sitting on the project’s steering group together.

One interviewee had come to the Falkirk Advice Project to receive advice on their benefits after going through a re-assessment for their disability benefit. The in-depth interview allowed the advisor to identify a much wider range of issues and to discuss possible solutions. As a consequence, not only was financial advice given, but help was also provided to get on a more manageable repayment plan for their debts. The interviewee was also made aware of additional benefit entitlements that they had not accessed before. This enabled them to get a car which helped to improve the quality of life of the interviewee.

A second interviewee had come to the Falkirk Advice Project after experiencing financial difficulty. Very quickly into the initial assessment, the advisor recognised the symptoms of depression and advised sensitively to go to the doctor to seek treatment. They then received financial and benefit advice which stabilised the finances of the interviewee. In addition, a more appropriate benefits regime was arranged.

Both interviewees had stabilised their finances, increased their incomes and felt better about themselves after receiving support from the Falkirk Advice Project. They also reported improved mental health and less worry. Both were very grateful for the support they had received.

Providing bespoke, personalised advice and support to people having benefit difficulties is the key element of the success of the Falkirk Advice Project. A number of beneficiaries reported that having someone take the time to sit down with them and discuss their problems more in-depth was invaluable, and in stark contrast to the bureacratic processes they have encountered at the JobCentre and other public sector agencies.

PCF has supported the following outputs by the Falkirk Advice Project in 2015/16:

“ The forms were very Confusing and I wasn’t Sure how to fill them out. The cab staff were very Reassuring and visited My house to help me With the forms.”
A beneficiary

The PCF approach and its associated funding allowed the CAB to deliver a separate targeted and responsive needs-based advice service regarding welfare benefits. Recent changes to benefits have increased the numbers needing advice and this service is taking the strain from mainstream CAB and Council advice services allowing them to offer targeted support to people in crisis.

The levels of co-production with service users follows a traditional support model of advisor/advisee. Falkirk CAB appears to have greatly improved its links with partners at a strategic level – particularly between the CAB and the Council.

There are ideas for the future, for example including delivering services in places such as nursing homes, etc.