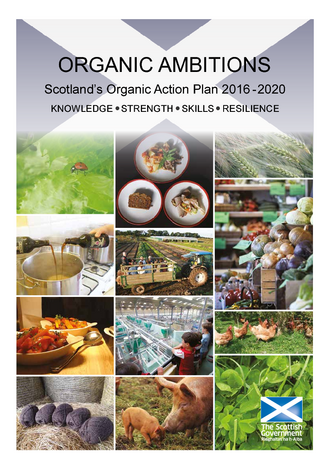 We want to create a stronger Scotland, one that is fairer and more prosperous and in 2015, our Year of Food and Drink, I announced that Scotland’s food and drink sector was booming, with consistent year on year growth which is strengthening the Scottish economy. Organics has an important role to play in adding to this growth so that we continue to see a sustainable increased turnover.

We recognise the wider public benefits of organic farming such as encouraging biodiversity, tackling climate change, improving soils and protecting our water environment. We have supported organic production under Scotland’s Rural Development Programme and this new organic action plan, which I am delighted to endorse, was referred to in our discussion document ‘ The Future of Scottish Agriculture’, which outlines a vision for the future of Scottish agriculture.

The new action plan, which has been developed by industry in close cooperation with the Scottish Government, reflects our shared agenda for the sector, with actions being taken forward by all parties concerned with growing the organic food and drink supply chain in Scotland. The plan sets out a framework for the next five years and is a solid base on which to build. It is centred on developments in knowledge, strength, skills and resilience, as identified as priorities after extensive consultation with a wide range of stakeholders.

Partnership, through working with key players inside and outside the industry will be crucial to strengthening the organic supply chain, releasing the yield potential of organic farming, and in meeting our ambitions for the industry and our wider society. I applaud the Scottish Organic Forum, who have already encouraged partnership working throughout the organic supply chain. In order to achieve the outcomes from this ambitious new action plan, it will take more of this positive collaboration.

Since the launch of the last Scottish organic action plan in 2011 there has been continued interest in organic products. Strengthening success in the marketplace relies on a number of factors, most notably effective communication to buyers about why they should purchase Scottish organic goods, but also on the innovation, expertise and entrepreneurial spirit of organic businesses.

We want to see a strong organic sector in Scotland, one that is strategically supported and that can compete with the rest of the UK, EU and indeed the world. We also want to see a Scottish organic sector that is self-sustaining, adds value to our environment as well as the economy, and this new action plan will surely assist in realising these ambitions.

“Scotland’s food and drink sector is a real national success story. Scotland is developing a national identity at home and overseas as a “Land of Food & Drink”, driving the industry to become the best performing domestic sector of the economy and Scotland’s fastest growing export. The Scotland Food & Drink growth strategy is built upon finding premium markets for products that have a strong provenance story. That means real opportunities for our organic sector in the coming years and this action plan can create a foundation to grasp the clear opportunities ahead.”

“Scottish Organic Milk Producers fully support the new Organic Action plan as it is important that all the bodies from farmers to procurement organisations are united-and seen to be united- in their ambitions. “