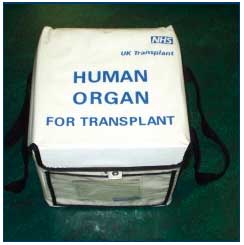 Today most of the organs that are donated come from those who have died. The patient is on a ventilator, the heart is still beating and death has been confirmed by brain stem testing.

The ventilator provides oxygen which keeps the heart beating and blood circulating after death. These donors are called heartbeating donors. Organs such as hearts and lungs, which deteriorate very quickly without a blood supply, are usually only donated by heartbeating donors. Very few people die in these circumstances.

Because of the shortage of donated organs, interest in non-heartbeating donation is growing.

In a small number of hospitals, patients who are certified dead on arrival or die in the accident and emergency department can donate organs, in particular kidneys as they are able to tolerate longer periods without oxygen than other organs. For this to happen, however, steps have to be taken to preserve the kidneys until the next of kin are contacted and the possibility of organ donation discussed with them. This is a special technique in which the kidneys are flushed with a cold preservation fluid. To do this a small tube is inserted into a blood vessel in the groin. This must be done within minutes of death to ensure the kidneys remain suitable for transplantation.

If the family object then the procedure goes no further and the small tube is removed. If the family agree to donation then the kidneys are removed and transplatation is carried out in the usual way.

Elective ventilation is the use in intensive care of artificial ventilation in a selected group of deeply comatose patients close to death in order to preserve the patient's organs for transplantation after death.

Elective ventilation first took place in the late 1980s and increased donation. However, in 1994 elective ventilation was stopped because there is a common law requirement that medical treatment should be intended for the 'patient's own benefit'.

Some people think that this decision should be changed. They argue that patients who are deeply comatose from brain injury or bleeding into the brain should be allowed ventilation for the sake of organ donation,when this is the stated will of the patient or the will of his or her next of kin.

Mr Jetmund Engeset, a consultant transplant surgeon, believes that there should be a change in the law. He says:

"I believe this is for the good of everyone. For the person who receives the organ, they are given a new chance of life. Society benefits because there are fewer people on dialysis and the donor's family benefits because they can feel some good has come out of their sadness. I have seen the uplift which is generated among donors' families by organ donation."

Intensive care exists to offer support to organ systems and thus allow patients to get over a life threatening illness and get back to life. Many intensive care doctors in Scotland are therefore not in favour of elective ventilation as it may involve doing things to a patient from which they cannot benefit. Some may see elective ventilation as an unwarranted interference in the process of a patient dying.

However, if intensive care is inappropriately applied it can also prolong death and thus give rise to increased distress to both patient and their relatives.

The future might lie in retrieving organs from other sources. Xenotransplantation involves transplanting from one animal species to another, with pigs the most likely source.

This requires genetic modification of the animal, to reduce the chance of the human body rejecting the organ. At present, xenotransplantation is against the law in the UK, because of concerns about the transmission of disease from one animal species to another.

"This would appear to be an exciting development. It will be for the Department of Health to decide if or when preliminary medical trials can begin. There is still a lot of research to be done. There are very real concerns over the possible transfer of infections."

However, there are other issues.

"We have every sympathy for people who need organ transplants, but it does not mean it's right to do anything to animals to solve the problem. This technique involves animal suffering."

Similarly, a spokesperson from Compassion in World Farming said:

"CIWF is not alone in recognising the real risk to the human population of the spread of animal viruses."

Some also say that 'scientists are playing God by challenging the natural order'.

Some feel repulsion at the idea of placing animal parts inside humans.

However, is it wrong to deny long-suffering patients on waiting lists the hope and chance of a better life?