What do we know about Omicron?

Omicron is a variant of the SARS-CoV-2 virus first identified in South Africa and designated a Variant of Concern by the WHO on 26th November. Omicron is transmitting rapidly within Scotland and there is strong evidence that community transmission is widespread. The spread of Omicron in the UK appears to be similar to that seen currently in South Africa; although there are many epidemiological and societal differences between the two countries.

Based on the data presented in this paper which is up to and including 9 December, it is highly probable that Omicron will outcompete Delta and become the dominant variant within Scotland very quickly, with the potential to cause high case numbers.

The number of cases of the Omicron variant in Scotland can be tracked through S-gene target failure (SGTF), a feature of the results of positive PCR tests from Omicron infection, described in more detail later in this paper. As of 9 December, SGTF cases are already 13.3% of all PCR tests from Pillar 2 Lighthouse Labs, and we expect this to increase in the coming days and weeks. That proportion is rising exponentially as shown in Figure 1.

Case numbers are higher for females for all age groups except the under 20s and over 70s. However this is based on a relatively small number of cases and may vary over time. This may be due to different testing patterns among males and females, women typically have health and social care jobs that require them to test more frequently and as a result, we are likely to identify more asymptomatic cases among women compared to men. See Figure 3. This will continue to be monitored. 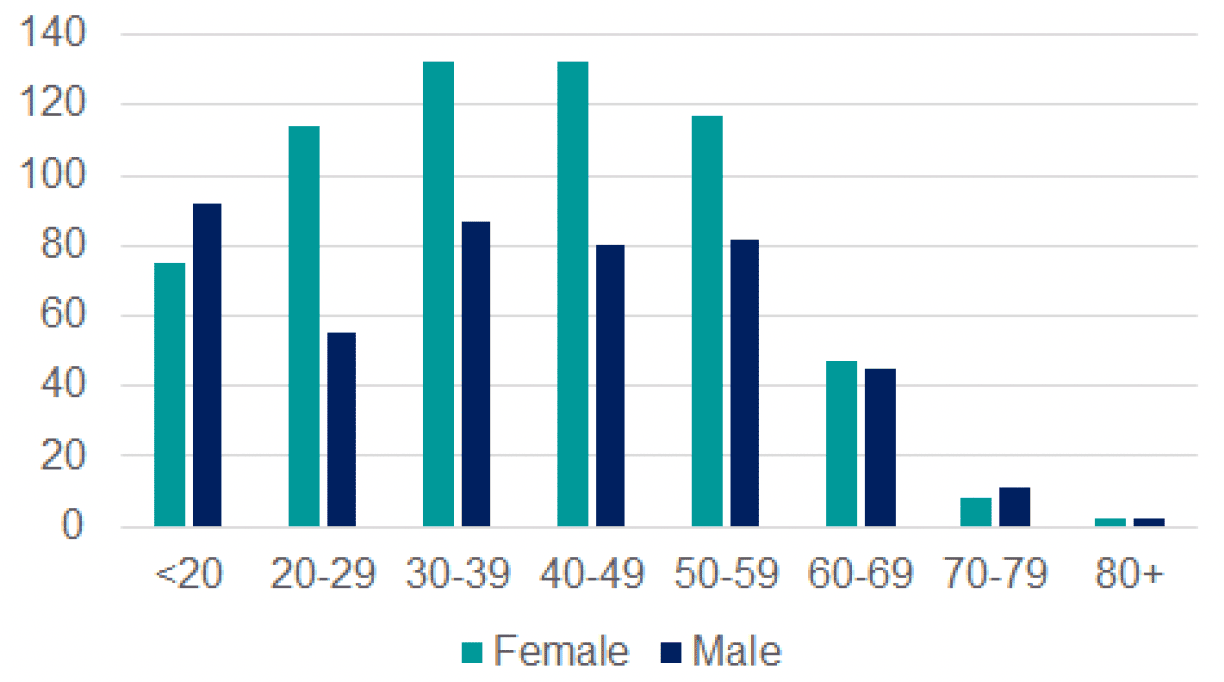 How do we identify Omicron?

PCR tests can accurately detect the SARS-COV-2 virus, including the Omicron variant. Omicron has a mutation that leads to PCR results showing an 'S gene target failure' (SGTF), the S gene being one of three genes whose presence the test detects that the which distinguishes it from the Delta variant[7]. Possible cases can be confirmed by genomic sequencing or genotyping using Allele specific PCR (ASP). Because PCR testing is quicker than genomic sequencing, and ASP is in the process of being rolled out, SGTF case numbers as a proxy for Omicron cases give us a quicker picture of whether and how omicron is spreading in Scotland.

Other variants can also show an SGTF like the Alpha variant that spread through the UK in December 2020. However, we know that the SGTF background rates in Scotland between July and October 2021 were stable and low due to the high presence of Delta. This suggests that SGTF signals are a good proxy for monitoring change in the Omicron variant[8]. SGTF is monitored in UKGov laboratories, which report 92-95% of all new cases recently detected on a daily basis in Scotland[9]. Omicron can also be distinguished from other variants by using sequencing or genotyping, but results from these methods take longer. SGTF case numbers give us a quicker picture of whether and how Omicron is spreading in Scotland.

The latest evidence available shows that Lateral Flow Tests as currently used by the population in general for home testing will continue to be as reliable for Omicron as for Delta. The Scientific Advisory Group for Emergencies (SAGE) in their meeting on 27th November suggested that:

"Lateral flow testing is a valuable way of identifying potentially infectious people and lateral flow devices have identified Omicron cases, indicating that they are still effective for this variant." SAGE_97_Minutes_29_November_2021.pdf (publishing.service.gov.uk)

Based on data to 6th December, we can estimate a doubling time for Scotland of between 2.18 - 2.66 days using S-gene target failure as a proxy for Omicron cases. We will continue to monitor the doubling times which may fluctuate or change over future days.

Using this data, Omicron is likely to make up the majority of cases in Scotland between mid-December and early January 2022. See Figure 5.

Will Omicron lead to more infections?

Although we are still learning about how many hospitalisations might result from Omicron, given the doubling rate shown above (Figure 4), we can start to estimate the number of infections which might result from this variant in Scotland. Figure 6 sets out our current understanding of the possible number of infections over the next two weeks. We will continue to revise this as more data becomes available.

It is likely that a proportion of these infections will result in hospitalisation. To avoid the NHS being put under severe pressure Omicron would need to be substantially less severe than Delta (either because of the characteristics of Omicron or the effectiveness of vaccination against severe disease) given the very substantial number of infections projected in Figure 6.

Population-level evidence from South Africa suggests that Omicron has a significant transmission advantage, an increased ability to escape immunity, both of these, or other fitness advantages over the Delta variant. Preliminary scientific evidence indicates that Omicron has some ability to evade natural immunity from prior infection. Small-scale laboratory trials in South Africa and Sweden report the potential for reduced vaccine efficacy although the administration of a third booster dose should help retain higher vaccine efficiency. It should be emphasized that this work is preliminary and based on very small numbers of cases. Similar analysis is underway in Scotland, but it is too soon to produce reliable results.

The implications of the current situation

Omicron is spreading at a rate that threatens a rapid and large surge of COVID-19 cases. Even if the resulting illness is relatively mild the number of cases could potentially cause great disruption to other services, in the economy and businesses, and in wider society, as more people would be absent from work due to illness and asked to isolate if they test positive, or as contacts of someone who has tested positive.

It also means that the rapid rise in Omicron infections could put significant additional pressure on hospitals and other health and care services, close to the point in the winter when they are already likely to be at peak pressure.

The evidence that Omicron is here and is spreading fast, and uncertainty over how it responds to vaccines and how much severe illness it causes, are grounds for concern about what might happen as it becomes the dominant strain of the virus.