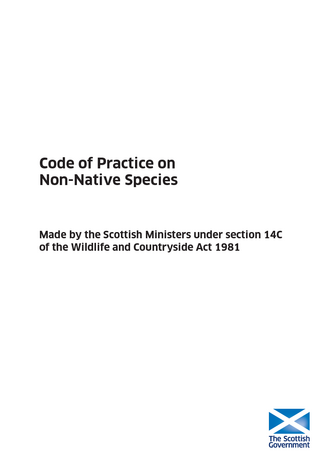 1.1 Our distinctive plants and animals are part of Scotland's character and underpin many of our lives and livelihoods. Increasingly, we value the role that nature plays in supporting our lives. From fungi breaking down organic matter to ospreys supporting a growing wildlife tourism industry, our lives depend on nature and the services it provides.

1.2 These plants and animals, and the habitats within which they live, have developed over thousands of years. Today, they are under pressure from development, changing climate, pollution and certain land management practices. A further threat comes from the release of non-native animals and plants and the impacts they can have are described later in the Code.

The Code of Practice

1.3 The legislation in Scotland which governs non-native species was updated and amended in 2011. The aim of this Code is to help everyone, including people who manage land containing non-native plants and animals or who are involved in the keeping of non-native plants and animals, to understand their legal responsibilities. It is not a replacement for legal advice but instead is intended to provide practical guidance and sets out good practice.

1.5 The Code sets out how you can play your part in preventing non-native species from being released. It describes where plants and animals from other parts of the world can be grown as garden plants and crops, or kept as pets and farm animals ( Chapters 4 and 5). The Code also defines (in Chapter 5) what is meant by "in the wild"; this is the area where these non-native plants should not be allowed to establish and create problems.

1.6 The Code sets out guidance on how you can act responsibly to ensure that non-native species under your ownership, care and management do not cause harm to our environment. The release of any non-native animal, or the planting of any non-native plant in the wild, is an offence (unless permitted under the Wildlife and Countryside Act 1981, any Order made under that Act [1] or under a licence issued by an appropriate authority [2] ). Guidance on how to find out if any plant or animal is a native or non-native species can also be found at Chapter 10.

1.7 If you are in any doubt regarding whether a species is native to where you are planning to release or plant it - don't release, don't plant.

The status of the Code

1.8 This Code has been approved by the Scottish Parliament [3] . It has been issued by the Scottish Government under section 14C of the Wildlife and Countryside Act 1981 (the 1981 Act). This Code of Practice comes into effect on 2 July 2012 and applies in Scotland only.

1.9 Failure to comply with the Code is not itself an offence. However, whether or not a person has complied with this Code could be used in court as evidence, by either the prosecution or the defence, if criminal proceedings are raised.

1.10 Some provisions in the 1981 Act relate to animals and plants outwith their native range and some relate to invasive plants and animals. These terms, along with some others, are explained in the box on the next page.

1.11 The definitions of "animal" and "plant" in the 1981 Act do not include microscopic organisms such as bacteria and viruses. The risks posed by such organisms are generally considered in terms of their ability to cause disease in plants or animals. Separate plant health and animal health legislation is in place to manage disease risks, and therefore they are not addressed by the 1981 Act. There is some overlap in the legislation in relation to non-native invertebrate species and fungi, which may also be regarded as pests.

Animal This term includes mammals, birds, fish, reptiles, amphibians, invertebrates and zooplankton. This includes the semen, ova or milt of an animal [4] .

Plant This term includes marine plants, vascular plants (flowering plants, ferns and trees) and lower plants (including bryophytes, lichens and macro algae). It also, for the purposes of this Code, includes fungi. This includes any propagule of a species encompassed in that definition, including (but not limited to) the bulb, corm, rhizome, seed or spore of a plant [5] .

Native range This is the range of locations in which an animal or plant (or type of animal or plant) is indigenous - where it occurs naturally. Chapter 3 describes this term in more detail.

Non-native Animals and plants that have been moved to a location outwith their native range by human action, whether intentionally or not, are considered to be non-native. The term "native" is used in this Code to describe plants and animals that are within their native range [6] . The term is explained more fully in Chapter 3.

Invasive species These are animals and plants which, if not under control of any person, would be likely to have a significant adverse impact on: