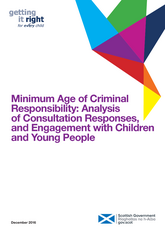 Consultation questions addressed both the principle of change and the key implications in relation to care and protection, risk, disclosure and the role of the Children's Hearings System.

95% of respondents support an increase to 12 or older. All organisations responding to the public consultation including Police Scotland, Victim Support Scotland, the Faculty of Advocates, the Law Society of Scotland and the Children and Young People's Commissioner support an increase, which provides a strong basis for proceeding with proposals to legislate.

Engagement with Children and Young People

Throughout June and July 2016 a series of events were held with various groups of children and young people across Scotland, based on the questions in the formal consultation but tailored to meet the needs of each of the groups especially bearing in mind the age of the children and young people and potential sensitivities around individual circumstances. The methods used to elicit and record their views ranged from scenario storytelling to quizzes, timelines, discussion groups, voting cards and artwork.

We targeted those affected by the current legislation, and those that have experienced negative life experiences from contact with the criminal justice system from an early age - as perpetrators and as victims.

In all we have engaged with over 200 children and young people from 8 to 22 years old. This depth of engagement with diverse groups has proved challenging but very worthwhile. All really wanted to take part and relished the opportunity to have their voices heard. There is a real desire from these young people to know their voice has been heard and a willingness to take part in future conversation.