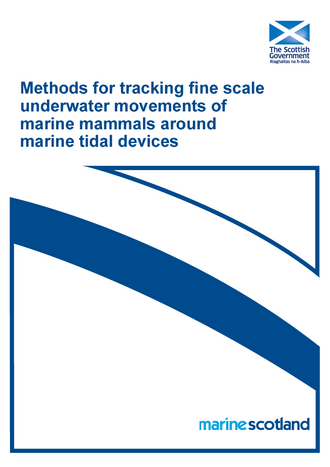 1. The Scottish Government has the duty to ensure that the development of offshore renewable sectors is achieved in a sustainable manner in the seas around Scotland. There is a need to evaluate potential interactions between offshore renewables and marine wildlife as a matter of priority. One such potential interaction is the effect of underwater turbine generators on marine mammals. This report considers the possible technological methods for tracking fine scale underwater movements of marine mammals around marine tidal devices. Since this is a dynamic field the Report will be updated annually.

2. We define the target specification for interaction data as follows: a range of 100m of the turbine which have a temporal resolution of 1s and a spatial precision of 1m.

3. These data requirements place a heavy demand on existing technology. However, we identify three generic methodologies that show potential:

4. Animal-borne telemetry devices. These electronic 'tags' are attached to locally captured animals (acoustic pinger tags are discussed below). Capturing cetacea is not currently feasible and so this technique is limited to seals. The difficulty in recapturing individual tagged UK grey and harbours seals (within the six month attachment period) means that those type of tag which rely on retrieval for downloading data are not an option. The best option is a tag that relays surface GPS locations and detailed dive depth profiles through the mobile phone system (the GPS/ GSM tag). GSM coverage is sufficient for most tidal devices areas. It is technically possible to incorporate dead reckoning ( DR) so that the 3-D underwater track can be accurately generated in between surface GPS locations. The drawback is that water current data are required for this calculation at a level of detail that is not currently feasible.

5. Passive acoustic detection ( PAM). PAM is essentially an array of hydrophones that can detect (to species level) and track vocalising animals (primarily toothed whales - especially porpoises and dolphins). A static array of hydrophones around a turbine should be capable of achieving the required level of precision. It is an unsatisfactory system for baleen whales that vocalise unpredictably. Whilst seals also do not regularly vocalise, they could be captured and fitted with individually coded acoustic 'pinger' tags. They would thus be capable of being tracked by a PAM system.

6. Active Sonar. Active sonar is akin to underwater acoustic radar. It has been proven to detect and track marine mammals in the vicinity of underwater turbines at sufficient spatial and temporal scales. It is good at detecting both seals and cetacea and viewing the raw data usually allows distinction between a seal and an odontocete. However we recommend that active sonar is used in conjunction with a PAM system, whereby the species (or individual, if acoustically tagged seals are used) discrimination is greatly improved. Active sonar is the only technology that will detect and track baleen whales.

7. To balance the strengths and weakness of the above technologies we suggest that the following generic configuration represents the best probability of achieving the overall objective:

8. Detection of a turbine blade actually striking a marine mammal is essential to interpret the consequences of fine scale movement. However none of the tracking technologies is likely to provide data sufficient to confidently discriminate an actual marine mammal strike from a near miss. Although high risk, we suggest that the feasibility of two possible approaches be explored. First, the physical detection of a strike using stress sensors built into the turbine blades. Second, the development of an underwater video surveillance system.

9. In Appendix II we illustrate our technological approach with a case study scenario at the proposed Sound of Islay turbine array.