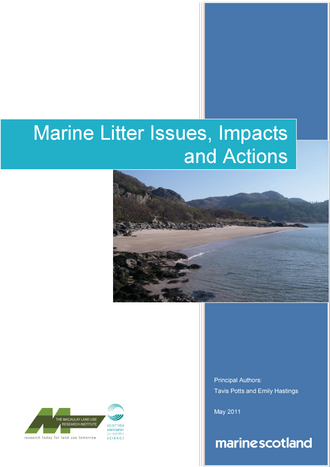 Marine litter can be defined as "any persistent, manufactured or processed solid material discarded, disposed of or abandoned in the marine and coastal environment. Marine litter consists of items that have been made or used by people and deliberately discarded into the sea or rivers or on beaches; brought indirectly to the sea with rivers, sewage, storm water or winds; accidentally lost, including material lost at sea in bad weather (fishing gear, cargo); or deliberately left by people on beaches and shores" ( UNEP, 2005).

Categories are used to classify marine litter, based on source and material, including plastics, glass, metal, timber, paper & cardboard and textiles. The majority consists of synthetic materials such as plastic, and is often highly persistent in the marine environment

Marine litter originates from different sources, circulates through pathways and accumulates in litter sinks. The sources of marine litter are from both land and sea based activities. A number of studies have looked at the differing proportions of litter from each of these and their results estimate that at the global scale the greatest proportion (up to 80% in some cases) is from land based sources, with similar proportions in Scotland.

Baseline data for Scotland on the types, amounts, sources and trends are limited mostly to coastal surveys of beached marine litter. These have shown in 2010, a total of 53,162 items litter for those Scottish beaches surveyed, with an average of 2382.2 items per km, higher than the UK average (1969 items/km). This represents an increase of 25% since 2009. Limited baseline data exits for benthic and suspended litter

The problems and threats caused directly or indirectly by marine litter are extensive, including environmental, social and economic impacts. Despite this our overall understanding of these issues is limited, particularly the indirect and socio-economic effects.

In addition, marine litter threatens the realisation of a shared vision for ' clean, healthy, safe, productive, biologically diverse marine and coastal environments, managed to meet the long term needs of nature and people' and may also impact upon Scotland's Strategic Objectives, most notably the drive to become a Greener, Wealthier & Fairer, Safer & Stronger and Healthier Scotland.

Marine litter has a substantial impact upon the economy. For several years policy makers and communities have experienced the problem of marine litter on beaches, and waterways with direct and indirect impacts, including a decline in the environmental quality of the coast as well as upon ecosystem services. While economic costing of ecosystem services is considered a relatively new science, it is clear that marine and coastal litter can impact and deteriorate a range of natural functions that provide on-going social and economic benefits.

As part of the study, a workshop was held at the Macaulay Land Use Research. Twenty eight participants were involved from across different sectors and geographical regions of Scotland and the UK. The workshop explored existing reduction, removal and governance issues and arrangements, and methods to reduce future inputs of marine litter by source (land, coastal and marine). Key areas of discussion which emerged related to chain of responsibility, industry efforts, litter reduction and collection initiatives, litter facilities, harbour and marine issues, riverine inputs, monitoring and data, geographical distribution of marine litter and policy coordination, governance and implementation.

In terms of governance, a vast amount of legislation exists with regards to marine litter. National and regional waste management structures, the actions of industries, and community and personal responsibility are complex issues that cross jurisdictions and scales and therefore have evolved a variety of associated instruments. It is clear that a sufficient mix of regulatory tools exist to inform and implement a Scottish Marine litter Strategy, with instruments from the international, EU and Scottish scales.

There are a plethora of initiatives at the local, regional and national scales both in the UK and Scotland, a number of which are specific to marine litter, others towards general litter management and environmental stewardship. These display a number of key strengths and work at different scales to engage the public in addressing the litter issue. Their coordination within a Strategy and identifying ways in which Scotland can better learn from and coordinate with, the global movement in tackling marine litter, is essential.

In addition to on the ground initiatives, innovation is often cited as a way of tackling environmental management and is essential to achieve goals and wider objectives such as environmental protection, social inclusion and sustainability. Different types of innovation can be used to achieve this including institutional, social, technological and regional innovation supported by emerging tools such as market based instruments. In order to effectively tackle the issue of marine litter, each of these need consideration and assimilation.

These examples and methods of best practice are essential to the development of a Marine Litter Strategy for Scotland, and through best practice process for identifying objectives and management planning a draft vision for a Strategy is recommended:

Vision:
By 2020 marine litter in Scotland is significantly reduced and does not pose a risk to the environment or communities. This is supported by our vision of a zero waste society, where people and businesses act responsibly and reuse, recycle, and recover waste resources

To realise the vision Strategic Directions in the areas of education, reducing inputs, seizing opportunities and economic growth, monitoring and engagement each with a suite of actions, and indicators for achievement, have been developed. Three options for the delivery of a Strategy have been presented across differing levels of implementation and consequently resourcing.