Each question had four possible responses: never, sometimes, often or always. Responses to each of these questions were added together to represent their overall life satisfaction. The scale has a minimum score of 5 and a maximum of 20 with a higher number indicating higher life satisfaction. Differences in levels of life satisfaction were explored in relation to a range of children's characteristics and experiences including: gender, BMI and perceptions of body weight, enjoyment of school, peer relationships and experience of bullying, and parent- child relationship.

On average, children scored 16.9 on the scale, indicating a generally high level of life satisfaction[6]. There was no statistically significant difference in the average score for boys and girls.

On average, children scored 16.9 on the life satisfaction scale 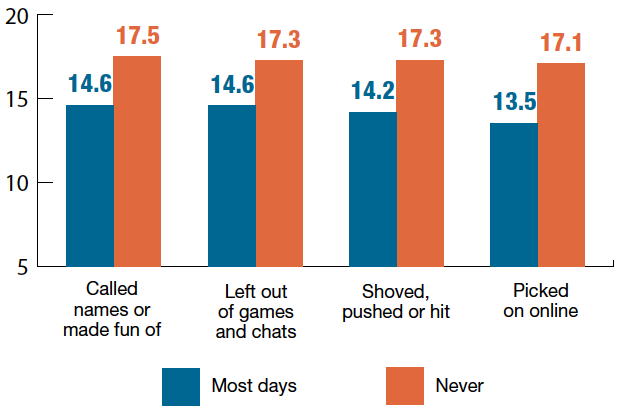 Being able to easily make new friends at secondary school was also associated with higher life satisfaction. Children who said making new friends was very easy had an average score of 17.4 compared with a score of 14.9 amongst children who found making new friends very hard. Similarly, children who felt that they could always count on their friends to help them when they had a problem reported higher life satisfaction than those who felt that they could never do so (17.6 compared with 15.2).

Positive parent-child relationships were also associated with higher life satisfaction. Children who were always able to count on their resident mother to help them with a problem reported a higher life satisfaction score than those who were never able to (17.4 compared with 14.6). Similarly, children who could always count on their resident father for assistance with a problem also reported a higher mean than those who never could (17.8 compared with 14.0). 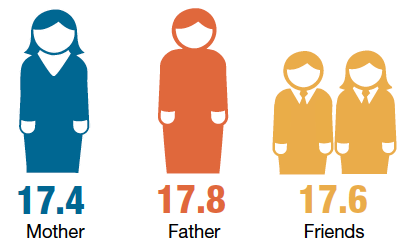