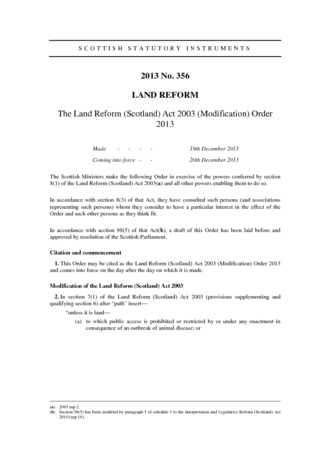 1) because of a notifiable animal disease

2) by way of a section 11 order under the Land Reform (Scotland) Act 2003. This is usually brought in connection with events e.g. Commonwealth Games 2014, a golf tournament or car rally.

The accompanying guidance has been prepared under section 27 of the Land Reform (Scotland) Act 2003, which gives Scottish Ministers powers to give guidance to local authorities on the performance of their functions under Part 1 of the Act. The guidance is in two parts reflecting the two different circumstances addressed by the Modification Order:

For ease and convenience: