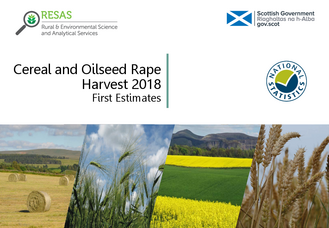 Total cereal production, the area grown and yields in Scotland are estimated to have decreased in 2018 compared to the previous year. Poor weather conditions experienced at key times during the year may have contributed to the fall.

Around 420,000 hectares of cereals are estimated to have been grown, three per cent lower than 2017. Estimates for yield look likely to drop by six per cent, which may lead to a nine per cent drop in production, to 2.6 million tonnes.

Oilseed rape is expected to follow a similar pattern to cereal crops with drops in production, area and yield in 2018.

How our first estimates are derived

The first estimate of the Scottish harvest is based mainly on information gathered by a panel of industry experts. This is combined with provisional census results for the areas grown, to produce estimated production totals.

Why do we produce first estimates?

First estimates are used to monitor cereal production and are required by EU regulations.

Are the first estimates accurate?

Differences in the first and final yield estimates are due to the amount of information available when calculating first estimates. We will not know the true final values until we publish the Cereal Production Survey results in December.

First estimates suggest a fall in the total 2018 harvest