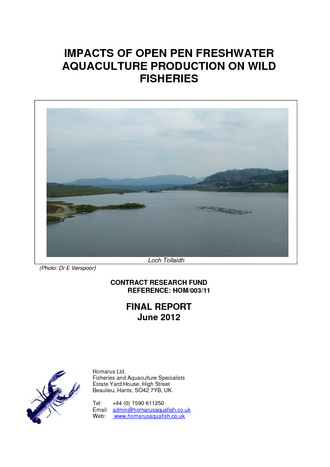 The study described in this report was commissioned by Marine Scotland, against a backdrop of concerns about the possible impacts of freshwater aquaculture on the health of wild salmonid populations in Scotland. The study was undertaken by Homarus Ltd, a niche advisory firm in fisheries, aquaculture and the marine environment, and was managed by a Steering Group appointed by Marine Scotland.

Atlantic salmon ( Salmo salar L) farming has expanded rapidly since the 1970's, with some 154,000 tonnes of fish being produced on the northern and western fringes of Scotland, worth £540 m annually on an ex-farm basis, and some £1 billion annually at retail. The industry is a major employer and investor in the economies of many remote rural/coastal communities. The Scottish industry exports all over the world, and sees opportunities to expand its production over the coming years, in keeping with rising global demand/need for aquaculture products in general, and Scottish salmon in particular. A mid-range target of some 220,000 tonnes per annum is assumed for the year 2022, for the purposes of this report.

Wild salmonids, and particularly salmon and sea trout ( Salmo trutta L), are also widely perceived to be iconic features of Scotland's natural heritage, and are a " resource to be held in trust for future generations by all the fishing nations of the North Atlantic" 1 . They are also integral to a range of rural businesses in Scotland, with an estimated value of £100m per annum through angling and related activities, (though this measure of economic benefit is not on an equivalent basis to farmed salmon values given above).

The status of Atlantic salmon stocks across the whole North Atlantic continues to give concern 2 , and whilst the rod-caught (released and retained) catch in Scotland has held up well, the overall abundance of fish has probably continued to decline, given that the catch (and effort) of coastal netting stations has significantly diminished. Many factors can affect the health of salmon populations and stocks, and marine mortality is seen as a key issue at an international scale. At a local and national level, factors such as pollution, predation, over-exploitation, commercial netting, impassable barriers, degradation of spawning/feeding environments and the presence of aquaculture are all important in terms of fisheries management, policy planning and grounds for conservation-based intervention. The current study is intended to address a sub-set of one of these factors: possible impacts on wild salmonids from the presence of pen-based salmonid farming in freshwater bodies.

What is the strength of evidence for negative effects on wild salmonid populations caused by freshwater pen culture?

What are the costs and benefits associated with partial or total phasing out of freshwater pen culture?

Evidence for Interactions between Freshwater Pen Farms and Wild Salmonids

The study has reviewed all of the available scientific literature in this field, as well as entering into dialogue with a range of national and international experts. The biological review has focused on three main subject areas:

1. Evidence of the potential pathways and mechanisms for freshwater pen aquaculture to impact on wild fisheries, whether through direct or indirect physical or environmental pathways, or through interactions of one sort or another with the genetic character of individual wild salmonid populations

2. Evidence of whether the identified pathways could occur in Scotland, given the physical co-incidence of pens with wild stocks and farming practices

3. Evidence of whether such impacts have occurred in Scotland.

The physical co-incidence of pen farms with wild salmonid stocks has been considered, and the following points are highlighted in the report:

The review of the literature for the potential interaction between wild and farmed salmonids suggests that existing biological understanding, combined with what is known specifically about freshwater loch (lake) ecosystems, shows there to be a general biological potential for reproductive and ecological interactions between wild salmonid fish populations and Atlantic salmon and rainbow trout reared in freshwater pens in lochs where the two are coincident.

Few scientific studies have been carried out into specific effects of freshwater pen rearing on wild salmonid populations and understanding of the actual potential for interaction is limited. What studies have been undertaken support the view that there is a possibility of impacts on wild populations of salmonids in Scottish freshwater lochs from freshwater pen operations with farmed Atlantic salmon or rainbow trout. However, more research is needed to understand the nature of actual interactions that could occur and the extent of any impacts that might arise.

The report describes the current practices of the freshwater aquaculture sector, and focuses on recent improvements in equipment and operating standards. It also describes possible future advantages to increased use of freshwater pens, in terms of lowering production costs and improving the prospects for sea lice management in the marine environment.

The history of reported escapes is reviewed, as is evidence that some escape incidents appear to have gone unreported.

Consideration of what is generally known about the state of wild salmonid populations suggest that wide ranging population-level impacts have not taken place. MSS catch statistics show no dramatic differences in numbers over the last two decades between rivers with or without freshwater pens. There are no instances where rivers with freshwater pens have lost their salmon runs or have even become severely depressed when compared to rivers without freshwater pens. In contrast there are cases where dramatic declines have been associated with hydroelectric developments.

Lack of firm evidence does not necessarily indicate that impacts are not or have not been occurring, only that they have not so far been clearly identified. That there is the theoretical potential for them to exist is clear. The report goes on to discuss the types of future monitoring and specific research that are required in order to answer the question with any degree of certainty.

The second part of the study has been progressed as per the brief, even though it remains unknown whether the use of freshwater pens has, or might in future, impact upon wild salmonids. It considers what the hypothetical implications of such policy shifts might be, if they were to be contemplated in the future, perhaps on the basis of new evidence.

The main focus has thus been on establishing the likely costs and benefits associated with alternate arrangements for freshwater stages of production, with particular focus on the restriction or phasing out of freshwater pen use.

Working with industry and its suppliers, and cross-referencing with literature reports, models of the capital and operating costs of salmon smolts and rainbow trout are presented, differentiated between different types of pen and land-based production. These core assumptions about cost are then factored into a consideration of a range of scenarios that might arise if policy changes on freshwater pen production are implemented.

The growth potential of the industry is a key element of such an analysis, as are more detailed considerations such as ongrown product yield per smolt put to sea. Taking a range of projections into account, it is possible that within the next 10 years, the Scottish salmon industry might require (at a mid-range estimate) some 55 million smolts per annum, i.e 19 million more than the current production. High and low estimates of smolt demand are also examined.

The costs of meeting such a requirement for smolts is considered according to different scenarios of restriction on pens in freshwater bodies, compared to a "do nothing" situation under which it is assumed that smolt production would gradually expand, retaining the current ratio of pen to land-based capacity. The same type of scenario modelling is also undertaken for rainbow trout production. The costs are ascribed in numeric economic terms to the industry, and qualitatively to other sectors that might be involved, e.g. public sector and other stakeholders. In summary, the net present costs of the different scenarios of change at varying projections for industry expansion are shown in Table A:

In the latter three scenarios, additional smolt capacity is assumed to be provided by a combination of modern flow-through land based farms and RAS units.

The benefits of the changes of policy scenarios are also described, although the difficultly in ascribing a numeric economic value to these is considered and discussed. Some numerical economic consideration is given to the possible defensive benefits to the commercial angling sector, on the assumption that catchments associated with pen aquaculture production might be affected if there were demonstrable future (and negative) impacts from the continuation of the aquaculture operations.

The costs described above are economic, but the report also considers the financial and strategic implications of any policy changes with respect to use of freshwater pens, should policies be introduced on the basis of new information or as a precaution. These are discussed in conjunction with issues such as industry profitability, historic and projected market price changes, existing regulatory costs and the ability of the sectors to raise capital, if required. The main findings are:

One of the scenarios modelled assumes that any restrictions on future use of pen farms in freshwater might prompt the salmon sector to seek its additional smolt requirements by way of imports from areas of equivalent health status. The implications of this possibility are discussed, and generally considered to be undesirable. The other important consideration is uncertainty about whether sufficient suitable locations exist for constructing new large land-based units. Economy of scale would be an important feature of any future development, irrespective of policy scenarios.

Several key points have emerged from this study:

On the basis of the above key points and the other wide range of evidence gathered for this study, the authors conclude that: