New Build Housing – All Sectors – up to end September 2018

The new-build section of this document provides figures on the number of homes started (when the foundations are begun) and completed (when a building inspector deems the property complete).

The figures have not been seasonally adjusted and so commentary tends to compare the latest quarter with the same quarter the previous year. To help with this, Quarter 3 figures (from July to September) have been highlighted in the charts to allow easy comparison over time. Some of the peaks in the number of starts in Quarter 1 each year are due to large numbers of housing association approvals being granted near the end of the financial year.

Chart 1 (see page 1) shows the number of private sector, social sector and total new homes completed each quarter since 2007, whilst Charts 2 and 3 (below) show annual and quarterly trends, respectively, in starts and completions across all sectors.

Trends over the last ten years – all sectors

Charts 1 to 3 all clearly show the impact of the recession in the second half of the last decade, with private sector led completions in particular falling throughout 2008 and 2009 (years to end September) due to the financial crisis. Completions for all sectors fell more gradually between 2010 and 2013, after which there have been some annual increases seen in the years following this.

The picture on all sector starts has been generally similar to the trends seen in completions, although most of the steep drop following the financial crisis was seen in 2009. 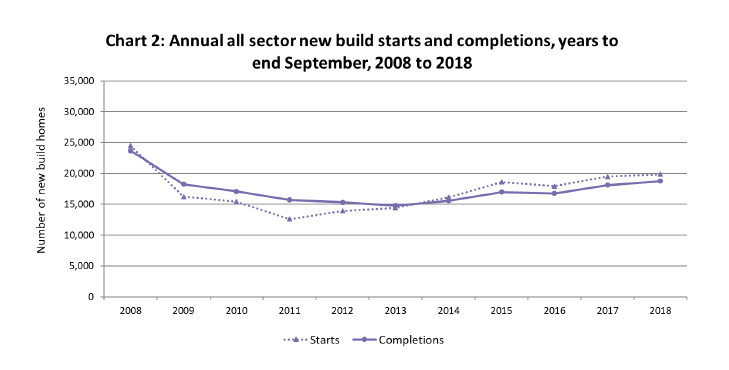 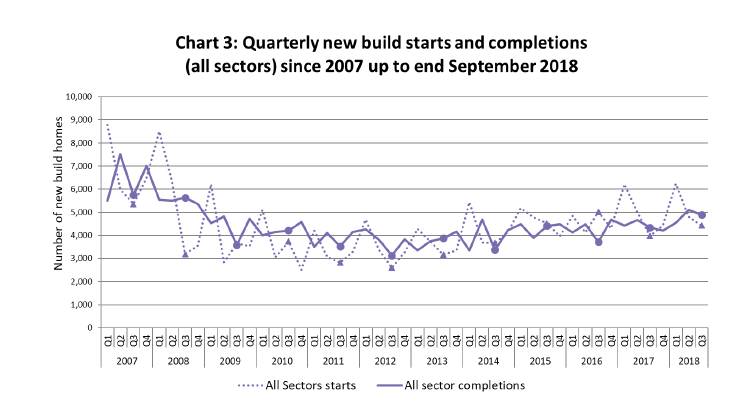 Trends to end September 2018 – all sectors

In addition to this, the Ministry of Housing, Communities and Local Government (MHCLG) also produces an additional annual set of statistics for England on new build homes, as a component part of the 'Housing supply; net additional dwellings, England' set of statistics[1]. These statistics are collected on a different basis to the quarterly UK country statistics as local authorities can use a range of data sources to collate these figures rather than solely using building control information. Figures on this for 2017/18 were published on 15 November 2018, and this publication advised that the 'net additional dwellings' should be considered the primary and most comprehensive measure of housing supply in England.

MHCLG have advised that the quarterly new build statistical collection for England, whilst being a useful leading indicator of activity throughout the year, is not currently capturing all new build activity, largely due to difficulties in collecting accurate starts and completions data from independent building inspectors or where building control has been sourced out to strategic partnerships or the private sector. These data issues do not exist in the Scotland quarterly housing statistics, given that all of the 32 local authorities in Scotland directly manage building control and the associated provision of data to the Scottish Government on starts and completions.

As a result of this advice, the new build component figures of the 'net additional dwellings' statistics for England are included in the UK comparisons as an additional set of figures to consider when comparing between countries.

The information on new build housing in Scotland is collected and published at local authority level. Map A, below, shows new house building in the year to end September 2018, as a rate per 10,000 population based on the latest mid-2017 population estimates. 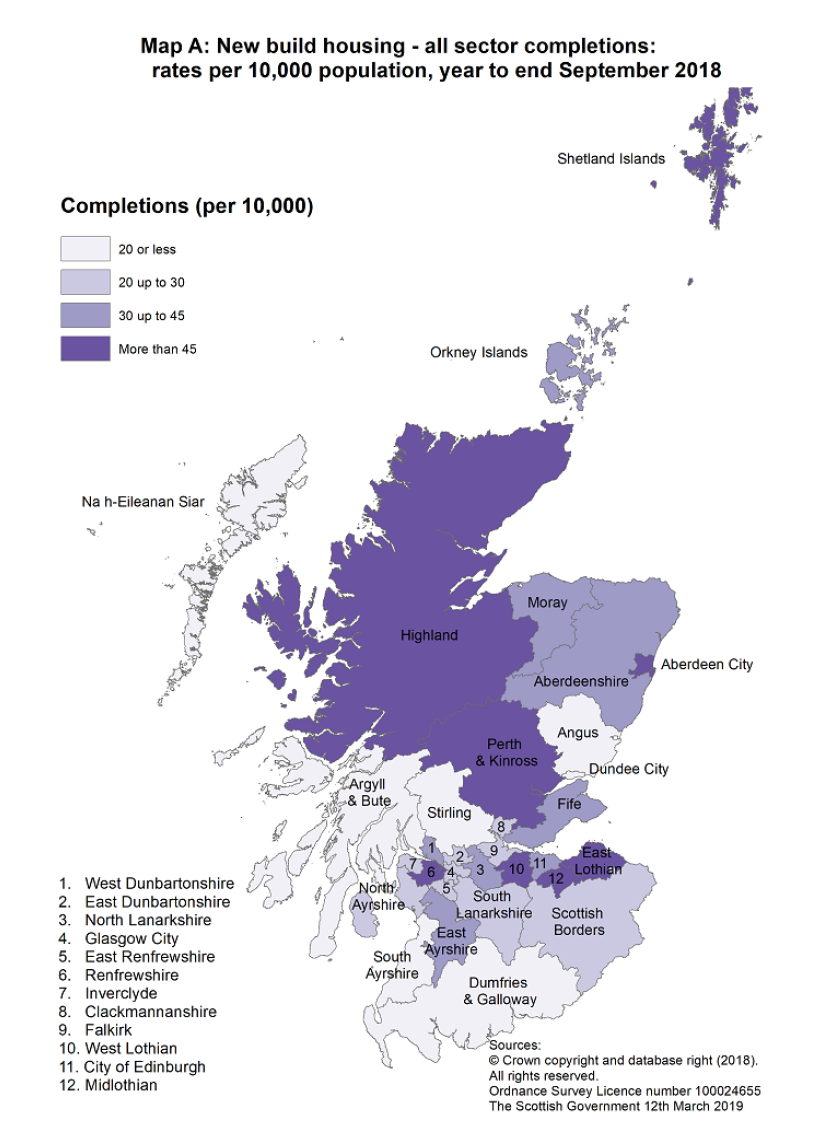