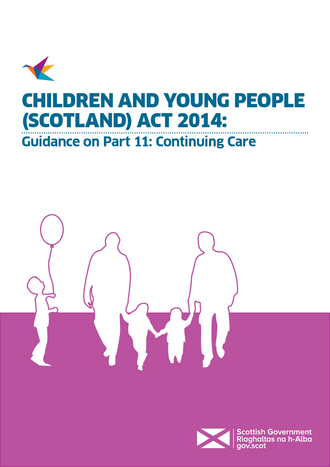 17. It is important to note that eligibility for Aftercare applies to all care leavers, regardless of their placement type while they were looked after.

21. The term 'care placement' refers to a placement for a looked after child (as described in section 26(1) (a) of the 1995 Act) with a family, relative or other suitable person or residential establishment.

22. Under the Continuing Care provisions of the 2014 Act, 'carer' means the family or persons with whom the placement is made.

23. The term 'Continuing Care' refers to a local authority's duty under section 26A of the 1995 Act to provide, subject to a welfare assessment, young people born after 1 April 1999 and who are at least aged sixteen but have not reached the higher age (as specified by Ministerial Orders) and whose final 'looked after' placement was in foster, kinship or residential care with the same accommodation and other assistance as was being provided by the local authority, immediately before the young person ceased to be looked after.

24. The aim of Continuing Care is to provide young people with a more graduated transition out of care, reducing the risk of multiple simultaneous disruptions occurring in their lives while maintaining supportive relationships. It is a new term introduced by Part 11 of the 2014 Act.

25. The definition of a 'corporate parent' is provided by section 56 of the Children and Young People (Scotland) Act 2014. An organisation or individual is a corporate parent if they are listed, or within a description listed, in schedule 4 [3] of the Act.

26. For the purposes of the statutory guidance on Part 9 (Corporate Parenting) of the Children and Young People (Scotland) Act 2014, the term corporate parenting is defined as

"An organisation's performance of actions necessary to uphold the rights and safeguard the wellbeing of a looked after child or care leaver, and through which physical, emotional, spiritual, social and educational development is promoted." [4]

28. The necessary actions or duties of corporate parents are set out in Part 9, section 58 (Corporate Parenting responsibilities) of the 2014 Act.

a) provided with accommodation by a local authority under section 25 of the 1995 Act; or

c) living in Scotland and subject to an order in respect of whom a Scottish local authority has responsibilities, as a result of a transfer of an order under regulations made under section 33 of the 1995 Act or section 190 of the 2011 Act; or

d) subject to a Permanence Order made after an application by the local authority under section 80 of the 2007 Act.

33. An individual's 'needs' will be unique, identified through the process of assessment. For details about how 'needs' should be identified please refer to the section of the guidance on Welfare Assessment and assessing young people for Continuing Care.

34. The term 'throughcare' refers to the advice and assistance provided to looked after children with a view to preparing them for when they are no longer looked after by a local authority. Local authorities are under a duty to provide such assistance to all looked after children under section 17(2) of the Children (Scotland) Act 1995. For more guidance on throughcare, please refer to the Supporting Young People Leaving Care in Scotland: Regulations and Guidance on Services for Young People Ceasing to be Looked After by Local Authorities published in 2004.

Healthy: having the best possible standards of physical and mental health, supported to make healthy and safe choices.

Nurtured: having a nurturing and stimulating place to live and grow.

Active: having opportunities to take part in activities.

Respected: being given a voice, being listened to, and being involved in the decisions which affect their wellbeing.

Responsible: taking an active role within their home, school and community

Included: being a full member of the communities in which they live and learn, receiving help and guidance to overcome inequalities.

36. These eight wellbeing indicators are sometimes known collectively by the acronym ' SHANARRI'. While each indicator is separately defined, in practice they are connected and overlapping. Taken together the eight indicators offer a holistic view of each child or young person, identifying strengths as well as barriers to growth and development.