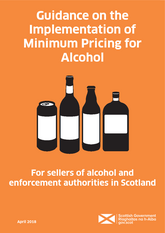 1. Minimum pricing is a key measure in the Scottish Government's alcohol strategy, and will set a price below which alcohol cannot be sold [1] . Alcoholic drinks which are priced at less than the minimum price per unit at the date of implementation (1 st May 2018) will need to increase. In the UK, a unit is 10 millilitres (8g) of pure alcohol.

2. The Scottish Government is introducing minimum pricing because there is lots of evidence to show that the more we drink, the greater the harm we suffer. The whole of Scotland is affected by harm that results from alcohol. Drinking too much alcohol causes illness, or even early death, affecting both the drinker and their family.

3. There is also lots of evidence to show that, as alcohol becomes more affordable, drinking increases, and as drinking increases so does harm. Alcohol is 60% more affordable than it was in 1980, which is why we need to take action to tackle low cost, strong alcohol. It is this kind of alcohol that tends to be drunk by heavier drinkers. One of the best ways to reduce the amount of low cost, strong alcohol drunk by people in any country is to make it less affordable. Making alcohol less affordable is a key action recommended by the World Health Organization to reduce alcohol-related harm.

4. A public consultation on the draft Scottish Statutory Instrument proposing a minimum unit price of 50p was undertaken from 1 st December 2017 to 26 th January 2018. Out of the total number of responses of 130, 70 responded to the proposed price directly. Of these 70 (48 organisations; 22 individuals), 52 (74.3%) indicated that they are in favour of the 50p minimum unit price. Scottish Ministers have confirmed that a minimum price of 50p per unit is what they have proposed to the Scottish Parliament be introduced from 1 st May 2018.

5. This guidance provides a reference for sellers of alcohol, Licensing Boards and Licensing Standards Officers ( LSOs) in Scotland for the calculation, implementation, and enforcement of minimum pricing. Information specifically for convenience store retailers is available from the Scottish Grocers Federation Guidance on Minimum Unit Pricing for Retailers [2] and specifically for wholesalers from the Scottish Wholesale Association Guidance Note on Minimum Unit Pricing and Licensing [3] .

6. Whilst this guidance deals with many of the more common issues arising, it cannot cover every scenario. Where there is a situation where a retailer is in doubt about whether minimum pricing has been complied with, the safest option would be to err on the side of caution. It may be that legal advice would need to be sought. It is ultimately the retailer's responsibility to be able to demonstrate that minimum pricing has been complied with.

7. The views expressed in this guidance do not bind Licensing Boards or the courts. The correct interpretation of legislation is, ultimately, a matter for the courts.

8. Following consideration of the Scottish Parliament process, it is intended minimum pricing will come into force on 1 st May 2018. There will be no period of grace allowed for the implementation of minimum pricing. Frequently Asked Questions can be found at Annex A.

If you have a query which you consider has not been addressed in this document, please email mup@gov.scot.

Who minimum pricing applies to

10. A licence is required to sell alcohol [6] to the public unless the premises are exempt as defined in section 124 of the Licensing (Scotland) Act 2005 (2005 Act). The sale of alcohol to the public without a licence, if the seller is not classed as exempt under section 124, is illegal.

11. Your local Licensing Board or Licensing Standards Officer ( LSO) are likely to advise you of the new mandatory condition around the time of implementation. A new licence is not required.