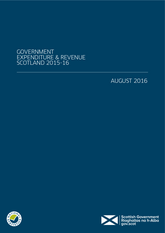 This section presents supplementary tables on public sector revenue and expenditure in Scotland.

Table A.1 below shows the population figures used in calculating per head estimates in GERS.

Table A.3 below provides the financial year GDP estimates used in GERS.

The headline GERS figures cover the whole of the public sector. As such, they include revenue and expenditure associated with public corporations such as Scottish Water and the Bank of England. They are on a financial year basis.

When conducting international comparisons, bodies such as the European Commission and the IMF present figures on a calendar year basis and covering only general government; i.e., excluding public corporations. In order to help comparisons with such figures, the table below presents the GERS results on this basis. As revenue and expenditure are primarily estimated on a financial year and public sector basis, the calendar year estimates below are illustrative and have been derived by apportioning the main GERS estimates.

The figures below are consistent with the figures that ONS publish in Table M1 of their bulletin: EU Government deficit and debt as reported to the European Commission, as published on 15 July 2016 available at the link below:
https://www.ons.gov.uk/economy/governmentpublicsectorandtaxes/publicspending/bulletins/ukgovernmentdebtanddeficitforeurostatmaast/jantomar2016

Note: As figures above are on a calendar year basis, the North Sea revenue figures differ from those shown in Chapter 2. They are consistent with those shown in Table J of Quarterly National Accounts Scotland 2016Q1
( http://www.gov.scot/topics/statistics/browse/economy/QNA2016Q1 )

Although tobacco duties and alcohol duties are both based on the Living Costs and Food Survey, the confidence interval for alcohol is larger. This is because the methodology for calculating alcohol duties uses more disaggregate survey data to reflect the different levels of duty, and revenue, received from different types of alcohol. This lower level survey data has a correspondingly larger uncertainty.

Amendments to the Country and Regional Analysis database

A number of significant improvements have been made to the HM Treasury Country and Regional Analysis ( CRA) database in recent years to apportion expenditure more accurately to countries and regions of the UK. While many anomalies in previous editions of the CRA have been addressed and are now reflected in both CRA 2015 and this GERS report, a small number of supplementary amendments to the CRA 2015 dataset are made in producing GERS. The aim of these refinements is to ensure that the public sector expenditure figure for Scotland captures as accurately as possible expenditure for the benefit of Scottish residents.

The amendments made to the CRA in producing this edition of GERS are shown in Table A.6. They are discussed in the detailed expenditure methodology paper available at http://www.gov.scot/Topics/Statistics/Browse/Economy/GERS/Methodology.

Note: Amendments do not include EU Transactions

As the CRA for 2015-16 is not yet published, there are no formal amendments to individual spending lines. The 2014-15 adjustments are in effect carried forward into 2015-16, adjusted for the spending of the responsible department. Further detail is provided in the expenditure methodology note.

Spending in GERS is based on the HM Treasury Total Expenditure on Services ( TES) concept, which accounts for around 90% of total spending. Accounting adjustments are used to move from TES to Total Managed Expenditure ( TME), the primary measure of public spending used in the UK Public Sector Finances. As discussed in Chapter 1, for the majority of these adjustments, accompanying adjustments are included in revenue estimates, and therefore do not affect the net fiscal balance or current budget balance. This is shown in more detail in Table A.9.

Table A.7 below shows the accounting adjustments applied to UK spending in GERS to move from TES to TME. Table A.8 shows the adjustments for Scotland. As discussed in Chapter 3, the ONS has reclassified the Special Purpose Vehicle set up to deliver the Aberdeen Western Peripheral Route ( AWPR) to be part of the public sector. Decisions on the bodies set up to deliver the Edinburgh Royal Hospital for Sick Children and the Dumfries and Galloway Royal Infirmary are expected later this year. These are all projects being delivered by the Scottish Government non-profit distributing ( NPD) model.

Since the ONS decision on the AWPR, the Scottish Government has begun recording spending for all three projects on the UK Government's accounting system. As such, expenditure associated with all three projects is included in the TES measure used by HM Treasury in their Public Expenditure Statistical Analyses publication. However, ONS have not yet incorporated any expenditure associated with the projects into their estimate of TME in the UK Public Sector Finances. For the AWPR, the ONS is waiting for a final decision as to whether the expenditure will be counted as government expenditure or public corporation spending. For the health projects, no ONS decision has been made on their classification, and as such the Scottish Government has pre-empted the ONS by reporting them within its spending.

As the ONS do not currently include the AWPR or health projects expenditure in the Public Sector Finances, the expenditure is not included in total expenditure for either Scotland or the UK in GERS, and is removed as part of the TES to TME accounting adjustments. As all the expenditure is associated with the Scottish Government, this has a relatively greater impact on Scottish expenditure.

As discussed in Chapter 3, Network Rail expenditure from 2015-16 is now included within the transport spending line, and as such accounting adjustments are no longer required.

1 The Housing Revenue Account ( HRA) is classified as a Public Corporation by the ONS, which means that they pay dividends on their profits to local authorities. To ensure that these dividends are non-negative, the ONS impute a subsidy from local authorities to HRAs to cover any shortfall (offset in Public Corporation gross operating surplus, which scores on the revenue side of the account).
2 Renewable Obligation Certificates are bought and sold by energy companies. The ONS have decided that these flows should be channelled through central government and so impute offsetting amounts of spending and income.

The table below shows which parts of the Scottish expenditure accounting adjustments are included as revenues, and where they appear in the revenue tables.

GERS uses National Accounts principles, which show pensions expenditure as the difference between monies paid into the pension fund and monies paid out, and which shows gross expenditure before VAT refunds. Depreciation in GERS is based on the concept of capital consumption, which uses estimates of the value of assets used to provide services in terms of current asset values.

In contrast, budget documents use financial accounting principles, which include a measure of future liabilities of pension funds, and which shows net expenditure after VAT refunds. Depreciation is based on historical asset prices.