Bringing decision making on local resources closer to local people is a process known worldwide as 'participatory budgeting' (PB). First introduced in the particular political context of post-dictatorship Braziil over 30 years ago, the intention of activists and local politicians in Porto Alegre was to decentralise administrative power at the local level, by engaging and empowering local residents to be involved in making decisions on local priorities and the allocation of public resources to meet identified needs. The concept of PB has travelled the world, and has landed in Scotland in the particular and dynamic context of political engagement as a legacy of the 2014 independence referendum, public conversations and formal consultations on democratic and community renewal and legislative underpinning for community empowerment – the Community Empowerment (Scotland) Act 2015.

As part of its commitment to community empowerment, the Scottish Government through the Community Choices Fund, has supported a national development programme to underpin the introduction of participatory budgeting through local authorities, public and voluntary sector partners. £6.5million has been allocated by the Scottish Government between 2014-2018. This funding has supported a national programme of training, project match-funding, digitised voting, practice development and exchange, a web-based portal, and a three-year evaluation. Local authorities were no longer eligible for the 2018 funding but would instead be supported in developing practice to meet the most recent change in direction – the introduction in 2017 of a 1% target of local authority budgets to be allocated through community participation by 2021 (Community Choices 1% Framework Agreement between the Scottish Government and the Convention of Scottish Local Authorities (COSLA)).

In 2015, the Scottish Government commissioned a team at Glagsow Caledonian University (GCU) to conduct an evaluation of 'participatory budgeting activity' which has been ongoing from commencement in 2016 to the end of 2018. The evaluation has therefore been simultaneous with the development of what have been called the 'generations' of PB development in Scotland. These developmental phases can be grouped into training and exploratory activity in phase 1, with training to local authorities provided by PB Partners. Phase 2 saw local authorities go live with a series of participatory events for the allocation of localised small grants to fund local, community-based projects. In Phase 3, the small grants events continued, but local authorities and their public sector partners began to move into more mainstream service, budget, and partnership working for decision making.

The evaluation ran alongside the development and delivery of PB activities at a time when the policy context was also shifting with the creation of the Community Choices Fund in 2016/2017, and the development and publication in 2017 of the Framework Agreement noted above.

The evaluation selected 6 case studies, including the 3 Ayrshire local authorities as one case study grouping. The other areas were Glasgow, Edinburgh, Fife, Western Isles, and Aberdeenshire. The evaluation was undertaken in three overlapping phases.

Phase one, in 2016 a first round of interviews were undertaken with all 20 local authorities enagaged in PB at that time. Interviews were with council officers and elected members and set the baseline for data on practice and definitions of PB.

Phase two, in 2017 interviews with stakeholders in community and partner organisations were undertaken. A learning set was established comprising members from local authorities and community organisations from different case study areas. Focus groups and consultation events were held in Glasgow and Fife and the evaluation team attended working group meetings in Edinburgh and Fife. This evidence was also supplemented with an online survey of PB event participants in Glasgow and Fife. Further, over 2016 and 2017 the evaluation team attended PB events and undertook interviews with council officers and members across the case study areas. An Interim Findings Report was published in November 2017.

Phase three, in 2018 a repeat round of interviews was held with council officers, this time including finance directors and elected members with a financial management/oversight role, and external stakeholders, in order to gauge attitudes and approaches to implementing the Framework Agreement 1% target.

This Research Findings summarises findings across these phases from the most extensive evaluation of PB in Scotland to date. The findings are grouped around the four key areas of impact that the evaluation was commissioned to focus on, impact on:

Among the many findings of interest from this comprehensive evaluation, a number centre around the ongoing need for clarity of concept, definition, and purpose as to what constitutes PB, and what local authorities have in mind when considering activities and approaches to increasing community participation.

For many respondents in interviews, at PB events, to surveys and in focus groups, and from observing PB activity across the country, it is clear that:

Impacts of PB in Scotland

The full report contains extensive data from a wide range of sources, including from the many interviews conducted with elected members, local authority officers, local groups and other stakeholders. The findings on the key areas of impact are summarised here.

The evaluation was extended into a third year with a view to capturing learning and key areas of development for local authorities as they move towards the transformation of participation into mainstream budgets and services (the 2017 Community Choices 1% Framework Agreement between the Scottish Government and COSLA). The findings from the evaluation help identify areas requiring specific guidance and support to practitioners and decision makers in implementing this significant change in the relationship between local citizens and local state institutions. Key findings include:

Towards a Scottish Model of PB

In articulating the findings and reflecting on the progression of PB in Scotland, the evaluation process introduced a characterisation of a Scottish model of participatory budgeting: the 3 T's Model – transaction, transference, and transformation (Figure 1). 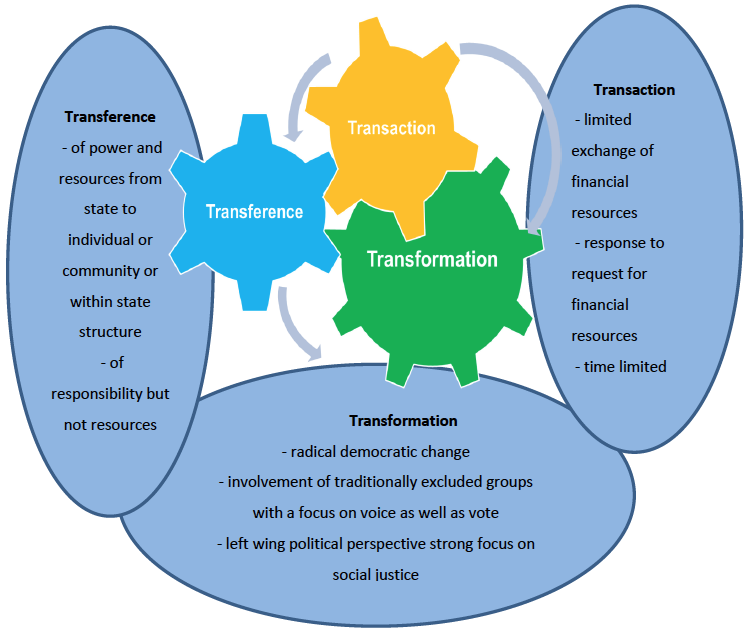 This model reflects the dynamic nature of continuing development in Scotland as participation in local decision making on public resources moves from a funder-beneficiary model to empowered engagement in mainstream budget decision making. This is particularly the aspiration of the joint Framework Agreement.

Actions and Implications for Practice

Informed by these key findings, the full report offers a series of propositions and challenges to the Scottish Government, local authorities, and the wider range of public and non-statutory sector organisations as they progress a Scottish approach to PB. The evaluation findings invite those with a commitment to PB as a potentially transformative force in local governance, community participation and budgetary allocation to consider a number of key propositions, as follows:

In responding to these challenges, the evalution proposes a series of practical actions across the four impact areas (Communities, Services, Local Democracy and Tackling Inequalities) which are informed by the substantial findings detailed in this report.

The actions comprise clear areas of re-orientation and practice by local authorities and partners to progress more inclusive, deliberative, engaged and empowered participation in local resource decision making. Where possible, drawing on the learning and evidence from the evaluation, indicative activities to implement the actions are proposed. The findings offer a range of learning points from the early PB activities and the opportunities to improve community involvement in the design and planning of events, and the need for the diverse needs and experiences of different members of the community.

Actions for Impact on Communities

Actions for Impact on Services

Actions for Impact on Local Democracy

Actions for Impact on Tackling Inequalities

These actions all require to be underpinned by sustainable political commitment to increase community participation, representation and deliberation in priority setting and resource allocation in Scotland. Local authorities have been the focus of the evaluation, but are not the sole actors in delivering greater community empowerment, even with the high levels of enthusiasm, energy, and effort that has characterised developments to date. These actions require a re-orientation and re-engagement with the multiple agencies involved in public service delivery in Scotland, in partnership with local people.

The early iterations of PB as a small grants process varied in how they have been presented to communities and the extent to which communities have been engaged in decision making beyond a transactional – funder:beneficiary relationship. Where there is evidence of transference of decision making power over local priorities and resources, communities and councils (and their partner organisations) are responding by changing, or aiming to change, their ways of working around service planning and design. The small grants as a transactional model has had important benefits around community cohesion, transferring knowledge and awareness of local activity, if not power over resources.

The transformative potential of PB is clear but requires significant improvement in the deliberative opportunities and processes for supporting participation in decision making at local level and at the level of council budgets. Uncertainties over levels of funding and stability of resources to councils undermine the ability of local authorities to scale up community participation. Established organisational and behavioural norms also impede innovation and the cultural change necessary to effect the systemic and political shift to increased community participation in budgeting and priority setting. As innovative examples emerge, it can be hoped that local authority elected members and officers will increase in confidence to adapt and to adopt more open and inclusive ways of working. The sharing of such good practice models might usefully be further encouraged.

Without significant shifts in understanding of the relevance of equalities characteristics, and the structural constraints that arise from gender, disability, race and class discrimination, there is a significant risk that approaches to PB will not engage across the depth and diversity of local communities. It is imperative to invest in accessible and deliberative processes, challenge established perceptions and behaviours, and take the lived realities of people's lives as a starting point if participation in public service decision making are to be inclusive and transformative.

Local communities do not all have the same capacity or share the same interests in being engaged in decision making. Capacity can be developed by increasing knowledge, supporting participation and access to opportunities, and by clearly articulating the purpose and rationale for individuals and community members to give their time and effort. Building trust in public authorities and the belief in the commitment to listen and respond are central to improving community capacity.

Ultimately, participation requires resources of time and finance from local authorities and other public sector partners to secure and sustain local capacity and interest. As councils develop their approaches to 'mainstreaming' PB, factoring in participation to spend is an essential consideration. Currently, many councils regard participation as an additional cost or that funds allocated to participation are lost to core service budgets. This mindset represents one of the most significant challenges to mainstreaming PB. It requires clear guidance from Scottish Government ministers and officials that participation is both the objective and the process through which community empowerment is to be supported, and community engagement in decision making is to be operationalised.

This report has identified a wide range of positive practice and commitment alongside considerable uncertainties and vulnerabilities. In presenting the analytical framework of the "3T's" - transaction, transference, and transformation– the intention is to offer the Scottish Government and other stakeholders an approach to characterise their own interpretation and implementation of PB. In addition, the model can serve as a way to evaluate the extent to which current practice at national or local level is meeting the aspirations of the principles of PB as a concept, and in relation to the demands placed on it. Ongoing evaluation of the implementation of PB as a mechanism for community empowerment and tackling persistent inequalities should also continue to be part of practice, reflecting the current and future contexts of public finance and public services in Scotland.