6.1 There was widespread agreement among teachers, LA representatives and national stakeholders, that programmes to support the full-time probationary year had improved over recent years, providing a more effective transition for newly qualified teachers into their first post.

Figure 6.1 How effective was the support given to you by the school/establishment to help you successfully achieve the Standard for Full Registration?

6.3 Professional learning undertaken during the probationary period was also highly rated. Eighty-five per cent of respondents thought that it was 'effective' or 'very effective' in helping them to achieve the GTCS Standard for Full Registration (Figure 6.2).

6.4 Probationers and early career teachers highly valued the role of the probationary year in equipping them with practical teaching skills - more so than their ITE placements- due in part to the extended time they spend in school and the consequent need to develop longer term solutions to problems and strategies for their classes.

Figure 6.2 During your probationary period, how effective was the professional learning you undertook in helping you achieve the GTCS Standard for Full Registration? 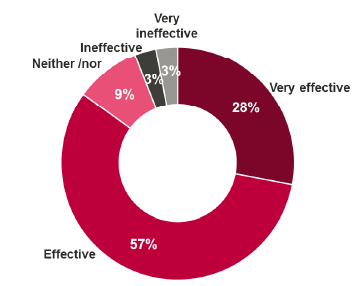 6.5 In the qualitative research, current probationers said they thought there was a good balance between the structured CLPL programme delivered by LAs and having the freedom to tailor their CLPL activity to their own specific needs. This was reflected in responses to the survey, where nearly all aspects of professional learning during the probationary period were viewed favourably - in particular, support provided by a mentor (55% thought this was 'very effective'). The exceptions to this were contact with university staff and further accredited study. For both of these aspects, almost half of the survey respondents (47% and 48%, respectively) reported that they were 'not applicable' to their probationary period or were not available to them (Figure 6.3).

Figure 6.3 Thinking about your probationary period, how effective were the following aspects of professional learning?

6.6 One of the main outcomes of the high levels of support and effective professional learning provided - particularly in terms of developing practical skills - was that probationers felt confident. This was reflected in secondary teachers' views who thought that probationers were more confident than in earlier generations; taking the initiative to suggest ideas, share practice and actively engage in developing departmental teaching practices.

M: I think there is more openness and a confidence with probationers now. Even having done mine eight, nine years ago, I feel it's completely different now […] there was an underlying thing of "we'll go in and try and fit in with the department. Go in with ideas, but don't rock the boat". But, now I think they are coming in much more... and we as teachers are a bit more open to other ideas. It's not so much, tow the party line and don't step out. I think there is a culture shift really.

F: I did mine about 11 years ago and there is a culture shift. Just their confidence, they're like a breath of fresh air when they come into your department, because they do come in with lots of ideas and they do, they are really open to share them as well.

Predictors of views of probationary period

6.7 Statistical analysis[13] was conducted to explore which variables best predicted whether a respondent thought that the professional learning they undertook during their probationary period was effective in helping them to achieve the GTCS Standard for Full Registration.

6.9 Other variables included in the model were the demographic variables[14], other individual aspects of professional learning during the probationary period[15] and awareness of the LA/university partnership.

What are the challenges?

6.10 In the qualitative research, teachers noted that probationer skill-sets, knowledge and experience varied by ITE provider. They were not necessarily better or worse, just different, but this made it difficult for schools to set realistic expectations about what probationers are able to achieve and the elements of teaching they will need additional support with.

6.11 Although teachers were generally positive about the quality of students and probationers, they also raised the point that probationers still needed support during their probationary period to develop their core pedagogical skills - the 'nuts and bolts' of teaching (as noted in section 5.7).

6.12 Current probationers and early career teachers who participated in the qualitative research had mixed experiences of being mentored. They discussed the importance for those designated as probationer supporters to be skilled and have the capacity to provide the appropriate support. Both these groups appreciated mentors who communicated well, and supported them by observing practice, listening to concerns and talking through teaching strategies.

6.13 One of the few negative elements of professional learning during the probationary year that early career teachers highlighted was that they felt the availability of places on specialist courses (e.g. SEAL[16] Maths and SQA National Qualifications training) was not meeting the high demand from probationers seeking to develop their curriculum knowledge at the outset of their probationary year.

6.14 While the probationer scheme - flexible route was not directly addressed in the qualitative research as very few of the teachers interviewed in the main interviews had come through that route, a number of those who were interviewed to specifically explore the views of those who had qualified outwith Scotland had. It was clear that their experiences of the probationary period were much less positive than those on the Teacher Induction Scheme (see section 6.19 below for more details).

6.15 In the survey the numbers coming through the probationer scheme - flexible route were again too low to analyse. However, the open-ended responses of those who had showed similar dissatisfaction with the levels of support provided.

As Flexible Route Probationer who completed a PGCE in England, I have felt very unsupported and unaware of any training opportunities available to me, especially in comparison with the support given to Route A probationers [Teacher Induction Scheme]. I continue to look for other full-time, permanent Secondary Art and Design teaching work but there have been very few, if any, jobs to apply for in my area in the past year. I have already had to relocate 3 times since graduation, going to wherever there has been work available and fear I will have to move again if I am to find employment to complete my probation.

6.16 In total, eight interviews were conducted with teachers who had qualified outwith Scotland - three had qualified in Poland, two in England, one in Greece, one in Belgium and one in Bulgaria.

6.17 These teachers felt that, to some extent, they had to seek out information and support for their transition to the Scottish Education system themselves. However, this was not always viewed negatively. There was a feeling from some that, as they have chosen to come to work in Scotland, it was their responsibility to "get up to speed".

6.18 The support and information provided by GTCS, when they first made enquiries about registering to work in Scotland, was thought to be helpful. However, for those who had qualified outside of the UK, there were difficulties around evidencing qualification equivalency and paperwork requirements for registration, for example:

6.19 Most of those who participated in the research were required to go through at least some probationary period (through the probationer scheme - flexible route) before gaining full registration, although this depended on the extent of their teaching experience. While the discussion was not focused on the probationer scheme - flexible route, it became clear that this was where most of the participants' concerns about the transition to the Scottish system lay. The issues they raised included:

6.20 Beyond the issues connected to the probationer scheme - flexible route, the main concerns were around connecting the Scottish Education terminology to that used in the country in which they qualified and adapting to the less structured nature of CfE. A couple of teachers commented that, at the time they came to Scotland, CfE was still in its early stages and there was CLPL available introducing the new curriculum - so they felt that they were 'in the same boat' as everyone else. However, they expressed concerns that, as CfE has become more embedded, these types of CLPL activities will be less common.

6.21 It is important to note that while these teachers were faced with the challenges of adapting to a new system, exacerbated by the issues raised by coming through the probationer scheme - flexible route, and often being on temporary or supply contracts, they had coped well with the changes and seemed to be happily settled in the Scottish education system.

6.22 One of the participants noted that it would have been useful to have someone who had been through the same process, particularly if they had come from the same country, as a "buddy" to provide support and advice on what to expect.

Teachers who have returned to teaching after a break

6.23 TSF recommended that "where an individual seeks to return to teaching, local authorities should provide them with relevant training to support their return to the classroom"[17].

6.24 Eight depth interviews were conducted with teachers who had recently returned to teaching after a career-break (five had returned after having children, one had been travelling and two had done both).[18] While these interviews did not strictly cover probation, this section has been included here as many similar themes emerged as did among those who qualified outwith Scotland.

6.25 As those who had undertaken their ITE outwith Scotland, there was little evidence of any structured support (from LAs or elsewhere) for returners and they had very largely supported themselves: they identified and organised the information, training and support they felt they needed as best they could. However, although schools tended not to provide structured support, participants did stress that their colleagues were generally very supportive and helpful when they asked for assistance.

6.27 One returner had received exactly this support - the opportunity to shadow/observe and a phased return - and had found it very beneficial.

6.28 The aspects that returners most wanted support with were CfE and the new National Qualifications and what that meant for their teaching practice. Those who had returned two or three years ago felt they were probably in a better position than those who had very recently returned, because there were more professional learning opportunities around the implementation of CfE and the new qualifications at that point (because everyone was adapting to them).

6.29 One participant, who had been unsuccessful in several job applications before securing a supply post, had tried to obtain feedback on why she had been unsuccessful but had received very little. While she understood that there were probably applicants with more recent, relevant experience and did not feel she had been unfairly treated, she suggested that more detailed feedback would be helpful for those attempting to return.