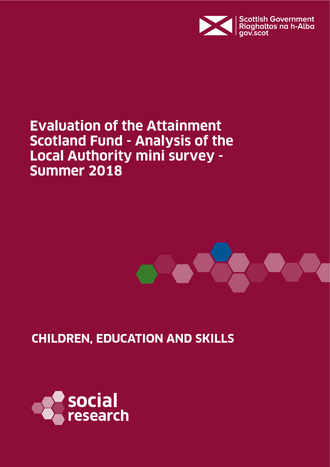 E.1. This report summarises findings from the Local Authority mini survey, which took place during April-May 2018.

E.4. The Attainment Scotland Fund continues to be a driver of change and cohesion. Authorities reported a greater focus on deprivation as a result of the funding.

E.5. Amongst most authorities, closing the poverty related attainment gap appears now to be embedded not just in those activities supported through the fund, but also through core education budgets and wider partnership agreements.

E.6. There is a general belief that this change in culture / ethos with a stronger focus on poverty and equity will maximise sustainability of improvements already achieved.

E.7. Generally, the planning and implementation of Pupil Equity Fund was positively reported by authorities. In particular, the one-to-one support provided to headteachers, the tailored guidance developed by some authorities and a focus on data and collaboration.

E.8. Overall, authorities praised the role of Attainment Advisors highly, stating that they were an "excellent source of support" providing "high quality and adequate challenge".

E.9. There were some concerns about a strong reliance on the funding to support staffing costs, and a belief that authorities would not be able to sustain this level of investment without the additional funding.

E.10. Concerns with staff recruitment, tight timescales and general issues with procurement continue to be ongoing challenges for most authorities.

E.12. In some authorities, recruitment of Attainment Advisors was reported as challenging.