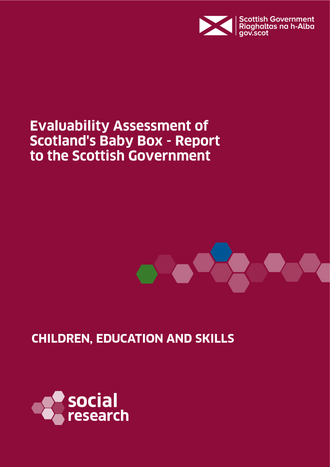 Scotland's Baby Box scheme is part of a range of Scottish Government policies and initiatives intended to achieve the best possible outcomes for children and families in Scotland. Unlike initiatives such as the Healthy Start vouchers provided for low-income families, Baby Boxes are universally available for all babies born in Scotland, regardless of socioeconomic status or income. They provide families with essential items such as digital thermometers, clothes, books, a changing mat, blankets, and other items needed in the baby's first few months of life.

The Boxes are intended to increase parents' understanding and practice of positive behaviours such as safe sleeping, attachment, and breastfeeding. They also provide health professionals with an opportunity to engage families with a wide range of health services, and to initiate conversations around positive and risk behaviours. By providing parents with the necessary items and information, the Baby Box could positively impact a range of health and wellbeing outcomes for the child.

Evidence for the effectiveness of Baby Boxes and similar interventions for improving child health and development in countries comparable to Scotland is scarce. Finland introduced Baby Boxes in 1938 to address concerns with high infant mortality rates and decreasing birth rates (Embassy of Finland, 2017; Gissler and Hakulinen, 2017). The Baby Box, or maternity package, was initially available only for low-income parents, but since 1949 has been available to all mothers in Finland. Perinatal and infant outcomes in Finland have improved since the introduction of the Boxes, and are now among the best in the world ( OECD 2018), but the impact of the scheme has not been formally evaluated.

Researchers acknowledge that any impact from the Boxes cannot be separated from other factors such as increased use of antibiotics, other improvements in healthcare, and the development of the wider welfare system (Gissler and Hakulinen, 2017).

Currently, Finland and Scotland are the only countries that operate universal, non-commercial Baby Box schemes. There are a number of schemes in other countries that share some features of Scotland's Baby Box, but they vary in accessibility, contents and messaging, and there have been few formal evaluations of their impact on health, wellbeing, and developmental outcomes for children and families. For example in New Zealand, a trial comparing a traditional woven flax bassinet that could be used in the parental bed with a conventional bassinet reported no increase in behaviours or markers of risk associated with sudden infant death, and some advantages, such as an increase in sustained breastfeeding (Tipene-Leach et al., 2014; Baddock et al., 2017). The Welcome to Parenthood scheme in Alberta, Canada provides parents having a first child with a Baby Box as part of a wider package of mentoring support, and is being evaluated by researchers at the University of Calgary [1] . Results are not yet available.

The Scottish Government has commissioned APS Group (Scotland) to provide the Baby Boxes. The four year contract is valued at £35.3 million for the delivery of the Baby Box.

Registration for full roll-out of the Box began on 15 June 2017 in preparation for nationwide distribution starting on 15 August 2017. Registration for a Scottish Baby Box has been made straightforward to encourage high take-up rates. Midwives administer and help complete registration cards with all pregnant women during the 20 to 24 week antenatal appointment. Once completed, registration cards are sent to APS Group, which operates a helpline for parents to contact should they have any enquiries once they have registered for a Box. Baby Boxes are delivered to parents between 32 and 36 weeks of pregnancy, and can be cancelled at any time leading up to delivery of the Box.

The second research project was carried out on the Baby Box pilot, which took place from January to March of 2017. The pilot involved the delivery of 160 boxes to families and was conducted in two locations – Clackmannanshire and Orkney – chosen for their varying geographic and demographic characteristics. Interviews with families and health professionals were conducted at the pilot sites to obtain information on the use of the Box and its contents, the process for registering for and receiving the Box, and the overall response to the Baby Box scheme. Based on findings from the pilot research, the Scottish Government made several changes to the scheme prior to full roll-out.

The third research project took place after full roll-out of the Baby Box. A telephone survey was conducted with a sample of parents who had received the Baby Box to obtain their views on the contents of the Box, the nature and level of information included ( e.g. on safe sleeping and breastfeeding), communications about the scheme and use of the associated Parent Club website. Overall satisfaction rates were very high, with 100% of parents stating they were 'very' or 'quite' satisfied with the overall quality of the Box and contents. Information from this study was used to inform year 2 procurement of the contents of the Box.

The case for evaluation

Research carried out before and during implementation suggests that the Baby Box scheme has been well-received by parents, but evidence on the impacts of Baby Box-type interventions remains scarce. The Scottish Government is committed to evaluating the impact of the Baby Box on children and families in Scotland. To inform decisions about the scope and design of evaluation, and involve expert stakeholders reaching these decisions, the Children and Families Directorate commissioned an Evaluability Assessment. Chapter 2 describes the Evaluability Assessment process, Chapter 3 sets out and appraises evaluation options, and Chapter 4 provides a concluding discussion.