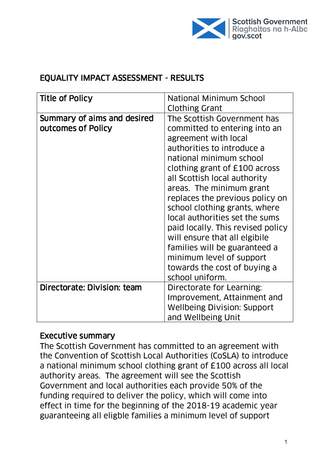 The Scottish Government has committed to an agreement with the Convention of Scottish Local Authorities ( CoSLA) to introduce a national minimum school clothing grant of £100 across all local authority areas. The agreement will see the Scottish Government and local authorities each provide 50% of the funding required to deliver the policy, which will come into effect in time for the beginning of the 2018-19 academic year guaranteeing all eligble families a minimum level of support towards the cost of buying a school uniform no matter where they live in Scotland.

This policy will contribute to the National Outcomes: "We tackle poverty by sharing opportunities, wealth and power more equally", "We are well educated, skilled and able to contribute to society", "We respect , protect and fulfil human rights and live free from discrimination" and "We grow up loved, safe and respected so that we realise our full potential".

Through the EQIA process, no negative effects have been identified as a result of implementing this policy.

School clothing grants have previously attracted a considerable amount of interest in both the media and in parliament due to the "inequality" of the sums paid across Scotland, which ranged from £40 to £110. Local authorities have always had a duty to provide school clothing under the Education (Scotland) Act 1980 if a pupil's clothing is deemed to be either inadequate or unsuitable for school. The 1980 Act does not set rules governing the methods of how clothing for school should be provided under those circumstances, although all local authorities make provision through awarding monetary grants to eligible families.

Scottish Ministers were in agreement that there should be a minimum school clothing grant, although their preference was to reach a voluntary agreement with local authorities - similar to the agreement of providing universal free school meals to all pupils in primaries 1 to 3, since this policy has proved to be successful.

The minimum school clothing grant, although not specifically listed in the Scottish Government's Programme for Government, is still recognised as an important part of our central focus on education which seeks to close the attainment gap and increase attainment levels for all. To achieve this, we believe that all children and young people should be given the same opportunities to benefit from their education regardless of their background or family's financial circumstances.

Some evidence gaps were identified, insofar as we do not have information on the incomes of LGBT people although the report on Poverty and Income Inequality in Scotland from 2014-17 noted this data is likely to be collected in the future. Despite this evidence gap, the impact of this policy is assessed to be wholly positive so it was decided to proceed with negotiating an agreement with local authorities to implement this policy.

Ahead of reaching agreement with CoSLA on the introduction of a national minimum school clothing grant, Scottish Government policy officials and analysts examined local authority websites to establish the level of provision at the end of 2017.

Eligibility criteria still varied across local authority areas, with less than half of local authorities having the same eligibility criteria as that of free school meals. However, this was not wholly negative as we noted many local authorities still paid school clothing grants to families in receipt of housing benefit and council tax reduction and the qualifying threshold for recipients of Working Tax Credit in some areas was higher than that for free school meals. In only two local authority areas we noted that provision was quite limited, with school clothing grants only being paid to families in receipt of either Income Support, Income-based Job Seeker's Allowance or Income -related Employment and Support Allowance.

The research also noted a disparity in the sums paid, which ranged from £40 to £110. These disparities ultimately led to the decision to begin negotations on introducing a national minimum school clothing grant.

The EQIA did not identify any potential negative impacts on equality from implementation of this policy. The national minimum school clothing grant would guarantee all eligible families at least £100 towards the cost of purchasing a school uniform no matter where they live in Scotland. The minimum grant will at least double the existing provision in 10 local authority areas where the grant was previously set at £50 or less.

The Scottish Government's agreement with CoSLA will also include a commitment to review the national minimum school clothing grant every 2 years to ensure it remains in line with the cost of living.

Consequently, these arrangements will provide benefit to those particularly identified in the Equality Impact Assessment.

The evidence collected over the course of the EQIA satisfied the Scottish Government that there is a clear requirement for seeking agreement with CoSLA to introduce a national minimum level of financial support to help low income families purchase school uniforms.

We anticipate this policy will have a universally positive impact. We believe that increasing support for children from low income families will contribute towards the Scottish Government's aim of ensuring that all children have suitable clothing that will enable them to learn and thrive at school, regardless of their families' financial circumstances.