8 Costs and Benefits of the EESSH

Benefits of delivering the EESSH

8.1 For tenants, attainment of the EESSH will mean that in the main no social property will be lower than a C or D band energy efficiency rating. Tenants should benefit from a warmer home, which could mean lower fuel consumption, lower energy bills and fewer tenants in fuel poverty. Attaining the EESSH, in addition to regulations specifying minimum energy efficiency of new boilers, is projected to provide benefits to social tenants of around £127m each year in reduced fuel bills due to improved energy efficiency. This is equivalent to an average of around £210 per year per household.

8.2 For climate change carbon abatement, attainment of the EESSH is projected to reduce carbon output by 760 kT per annum from the social rented sector – equivalent to the combined annual household emissions of Aberdeen and Dundee. The residential sector produced 12.7% of Scotland's greenhouse gas emissions in 2015 (6.1 MtCO2e). [6] Chart 1 shows the modelled average contribution of emissions from housing in different tenures. [7] 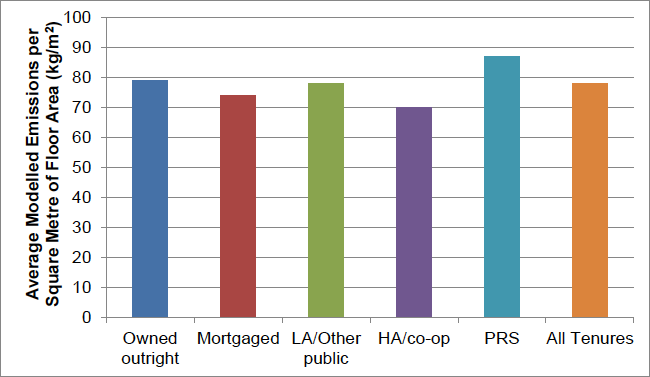 8.3 The estimates of the benefits of the EESSH were made during the development work for the Business Regulatory Impact Assessment and the EESSH case studies in 2014. We intend to carry out similar assessment as part of the development of the next EESSH milestone from 2020 onwards.

Estimated costs of compliance with the EESSH

Actual costs in first two years of the EESSH

8.5 Table 8 below collates data on investment from the performance returns made by social landlords to the Scottish Housing Regulator for the business years 2015/16 and 2016/17. [8]

Table 8: Investment in the first two years of EESSH

8.6 Table 9 summarises the performance data. This shows encouraging progress towards the EESSH target for 2020, but with reliance on landlords' own resources to achieve it.

8.7 Chart 2 illustrates progress towards the 2020 target, including landlords' estimates of the houses that will be brought up to EESSH during 2017/18. The red line shows the step-change needed to meet 97% compliance (based on landlords' anticipated exemptions).

Chart 2: Progress towards the 2020 milestone 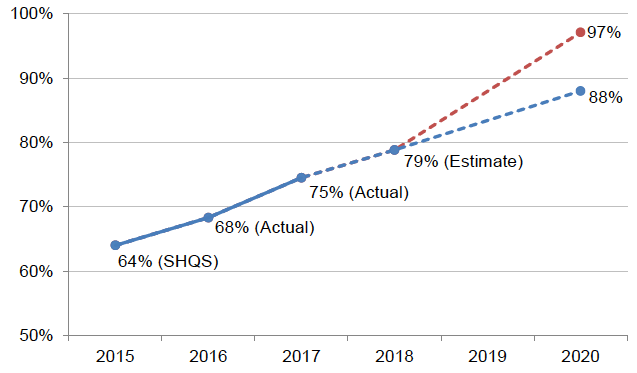