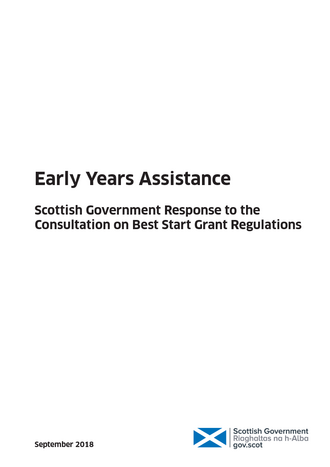 Response To The Consultation – Additional Information On Selected Questions

18. Though the consultation findings stated broad support for the residency model set out in the illustrative regulations, we have listened carefully to the concerns that were expressed and have decided to modify our approach to make the process simpler and more accessible.

19. Applicants on a qualifying benefit, or whose partner is on a qualifying benefit, will usually have demonstrated habitual residence in the Common Travel Area and will simply require to show that they are ordinarily resident in Scotland. Ordinary residence is defined as the place where a person chooses to live for a settled purpose, even if that purpose is for a relatively short period. It is therefore simpler to administrate than habitual residence and will require claimants to provide a lower, more straightforward, standard of proof. This approach also allows Social Security Scotland to rely more heavily on the information it will already possess through access to DWP systems, again reducing the burden on applicants. In practice, this means that many applicants will be asked for little more than simple proof of address, as opposed to the more difficult and sometimes intrusive habitual residence test applied by DWP for low income benefits.

20. For applicants not in receipt of a qualifying benefit, the position is slightly different. These applicants may not be registered with DWP, meaning we will often possess no information about their identity or address history. In addition to being ordinarily resident in Scotland, such applicants will therefore also require to demonstrate habitual residence in the European Economic Area ( EEA). In practice, the process of demonstrating ordinary residence in Scotland e.g. where it is clear that a person has lived here for a relatively significant period, will often be more than enough to also demonstrate habitual residence in the EEA (since Scotland is in the EEA). We have chosen to apply the condition of habitual residence to the EEA rather than e.g. the CTA or Scotland, as a way of simplifying the process and to broaden the evidence base that an applicant is able to draw on to establish eligibility. This is consistent with practice across the EEA where periods of residence in one member state can often be taken into account to establish eligibility for social security in another. We have also chosen not to replicate the elements of DWP's EEA right to reside test for low income benefits that serves to exclude from eligibility certain categories of EU nationals e.g. the economically inactive.

21. There is a close intersection between social security residence conditions and the immigration rules, reserved to the UK Government, that restrict access to public funds. Our policy intention is to be as generous as possible but without extending assistance to people whose ability to live and work in the UK could be jeopardised through receipt of public funds forbidden by their immigration status. However we do not believe that there is a strong argument for restricting access to BSG: the number of potential applicants in this group is small and they will often be amongst the most vulnerable. We have therefore chosen not to explicitly exclude those with no recourse to public funds and will discuss the effect of this with the UK Government. Our intention is to persuade them that it is right that BSG be extended to these groups, however this is ultimately a matter of reserved immigration policy and we will have little option but to abide by the UK Government's decision. We have also included rules which make express provision for the eligibility of certain categories of migrants ( e.g. refugees) and those fleeing domestic abuse.

22. This was a very complicated area to conclude due to complex family situations and the policy aim of reaching kinship carers, whose situations vary.

23. The test will be used to establish responsibility for a child as part of eligibility in the following situations:

24. We will also use the test in deciding whether a child under 16 living in the same house is the responsibility of the applicant, as part of the decision on whether the payment is a £600 payment for the first child or a £300 payment for the second child. Part of the test is used to establish the relationship between a grandparent and a young parent where that is relevant.

26. Using receipt of an existing benefit as a test of responsibility means that the application can be wholly electronic, which is easier for the applicant and quicker to process. The majority of consultees preferred the second test on the basis that it reaches more parents, in particular informal kinship carers. It also means that parents and carers in non-standard families are not required to specify their relationship to the child, which some kinship carers we spoke to had found intrusive, especially if their situation had been difficult. Where concerns were raised about test 2, they were generally about the reliability of processing for CTC and UC child which can make them difficult to access. CB was seen as a more reliable option.

27. Drawing on the responses to the consultation, we have combined the two tests we consulted on to produce this proposed responsibility test, in three tiers:

28. The test captures informal kinship carers who have secured a DWP benefit for the child they care for and allows for electronic application without the requirement to present paper evidence. The use of CTC and UC Child have been welcomed as they are paid to the main carer of the child. CB can be paid to an absent parent and can sometimes be retained in cases of domestic and financial abuse.

29. At the time of writing the consultation, we had thought that it would be possible to give priority to the recipient of the CTC or UC child over the recipient of CB where this was a different parent. As the service design has developed, however, we have found that the Agency will not be able to access HMRC records in a way that allows for this.

30. The situations of young parents under 20 vary significantly and can change as a result of an unplanned pregnancy. We have considered access for three age groups who have differing challenges in terms of access and evidence needs:

31. Pregnancy can have a disruptive effect on family relationships at younger ages and these young parents may be in transition when they need to apply. The consultation proposed that making the grandparent the qualifying person for parents under 16 and those who are 18 and 19 and still in education and training, as happens for the SSMG. This would mean that the grandparent meets the eligibility criteria and receives the payment. A number of concerns were raised about the grandparent qualifying, in particular around the rights of the child, empowering young parents and the possibility that children might not have a say in how the money for their own child was spent. Examples were given of parents refusing to apply on the child's behalf or using the money for their own purposes. Despite this, the majority of respondents agreed with the grandparent proposal and felt it to be important for a pregnant child or new teen parent to have the support of an adult in accessing the payment.

32. We have also been considering how residence requirements interact with eligibility for this group. If we were to go down the route of making the grandparent the qualifying person, there is a risk that a young parent and their child would be prevented from benefitting from the BSG in circumstances where the grandparent has no recourse to public funds despite the young parent having the right to access funds e.g. as either an EEA or CTA national.

33. In response to discussions during the consultation period and in keeping with the social security principles of dignity and respect, we propose that there is a choice for young parents:

18 or 19 Year Olds in Full Time Education or Training

35. Providing support direct to the young parent fits with wider policy objectives of supporting students to stay in education. A pregnancy can make a student vulnerable to dropping out and potentially not returning to education and/or training at a later stage.

36. There were 40 births to mothers under 16 in 2016 in Scotland and we considered how to ensure that there would not be any barriers to these young parents receiving a payment. The legal age of capacity is 12 years old in Scotland and, in keeping with the rights based approach set out in the Social Security (Scotland) Act, we concluded that making the young person the eligible person was the best way to ensure they can exercise their right to social security. This will allow vulnerable under 16s who cannot rely on parents to act on their behalf, or who have had to leave home because of the pregnancy, to access a payment.

Question 7 – Gaps in the Regulations

38. Discussions with stakeholders and the consultation process have identified a number of groups who could be prioritised in BSG eligibility. We have sought to design the eligibility criteria for the BSG so that it reaches as many of these groups as possible. At the same time, in certain cases, we have decided not to change eligibility because it would reduce the focus of BSG on families who are on lower incomes and add a disproportionate amount of cost and complexity to processing. Details are set out below.

39. Maternity Allowance ( MA) - MA is paid to people who cannot get statutory maternity pay. Recipients may be employed, self-employed or have recently stopped working. The number of people who receive MA and no qualifying benefit is expected to be low, almost all will qualify for BSG by another route. MA is not means tested and income of spouses and partners is not taken in to account so including MA is likely to extend BSG eligibility to people on higher incomes and undermine the principle that BSG is primarily an intervention for low income families. Adding a test to ensure that an MA recipient is on a low income or does not have a partner would increase administrative complexity and would be disproportionate to the numbers affected. We have therefore decided not to include MA as a qualifying criterion for BSG.

41. Disability Living Allowance ( DLA) and Child DLA – We concluded that costs associated with the disability were better looked at through child DLA and PIP.

43. Students - Students who are under 18 will qualify for the Best Start Grant. Those who are 18 or 19, still dependent on their parents and in full time education or training will also qualify. Other students will need to be on a qualifying benefit which may mean that they have to wait and apply for a BSG after their baby is born, when they are in receipt of CTC or UC Child element. Separate provision for students has the potential to complicate BSG processing significantly in particular around residence requirements. We therefore decided not to make separate provision for students in the eligibility for BSG, with the exception of those who are 18 or 19 and still in full time education, as outlined above.