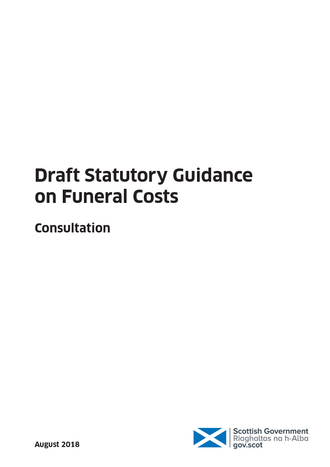 The death of a loved one is a heart-breaking experience. Where it has not been possible to put aside money for the funeral in advance, worries about costs can add to the difficulties faced, potentially tipping people into poverty and making things even more difficult for those who are already facing hardship.

The Scottish Government is acting to tackle this issue. In August 2017, we published our Funeral Costs Plan which sets out a range of measures aimed at addressing funeral poverty.

We have already begun to make a difference in this area. We will invest over £3 million each year to widen eligibility for the Funeral Expense Assistance benefit that will replace the DWP Funeral Payment in Scotland by summer 2019. We will also uprate the flat rate part of this payment annually. Working with COSLA, we have committed to removing local authority child burial and cremation fees, recognising that the loss of a child is one of the most traumatic things any of us will ever face. Both these actions will provide improved support directly to people who have been bereaved.

This consultation asks for views on draft statutory guidance on funeral costs, which is Action 2 of the Funeral Costs Plan. While the setting of individual funeral charges is for local authorities and private businesses to determine, I want this guidance to help improve the availability and transparency of funeral charges information to help consumers understand, compare and choose the services that are right for them. This recognises that people buying a funeral are often distressed and need to make a purchase quickly, so they may not behave like a normal consumer. The guidance will complement other action the Scottish Government has already taken to help encourage people to talk about and plan their funeral, and we will continue our efforts in this area.

But the funeral market is complex. Crematoriums and cemeteries are operated by local authorities and by private providers. Most people arranging a funeral will use a funeral director, many of whom also sell funeral plans, which allow people to purchase most elements of their funeral and make funeral arrangements in advance of their death.

Given this complexity in the funeral market, we also want to work with the UK Government and Competition and Markets Authority ( CMA) in relation to areas such as market regulation, consumer protection and regulation of pre-paid funeral plans.

The CMA launched a market study on 1 June this year, with the aim of assessing how competition works between crematoriums and between funeral directors. It will also look at transparency issues in the funeral market. I welcome the CMA’s decision to conduct this market study, which covers many of the same issues that we are seeking to address through this draft guidance.

To develop the draft funeral costs guidance, the Scottish Government has worked with COSLA, local authorities and the funeral industry to try to identify areas of consensus; but also to explore areas where transparency and consumer choice might be improved through guidance.

This consultation is being launched at time of change for the funeral industry in Scotland. In my previous role as Minister for Public Health and Sport, I was responsible for the implementation of the Burial and Cremation (Scotland) Act 2016. I was impressed at the level of commitment that the funeral industry showed to working constructively with the Scottish Government over the implementation of the Act, sometimes in challenging circumstances.

As I take on my new role as Cabinet Secretary for Communities and Local Government, it has, therefore, come as no surprise to me to learn that the funeral industry, along with other stakeholders with an interest in funeral costs, have shown a similarly high degree of commitment to working with the Scottish Government to develop the draft guidance which we are now seeking your views on.

For the guidance to work in the way we want, it will need the support of the industry and other stakeholders. For that reason, I encourage all organisations and individuals with an interest to respond to this consultation on a draft of the guidance, to ensure that people will be able to embrace and implement the finalised guidance effectively, confident that it has been shaped using the best knowledge and information available.

Thank you for taking the time to give us your views.

Section 1: About the consultation