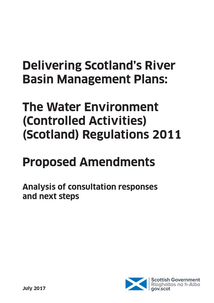 The Water Framework Directive ( WFD) introduced a comprehensive framework for protecting and improving the condition of the water environment across Europe through a process of river basin management planning. In December 2015, the second River Basin Management Plans ( RBMPs) for Scotland were published. These set out how SEPA, the Scottish Government and Scotland's local authorities and public bodies will work together to protect and improve the environmental quality of our rivers, lochs and seas over the period to 2027.

As a matter of good practice we carry out regular reviews of the effectiveness and transparency of CAR, and make routine amendments as new requirements emerge. A major consolidation exercise was carried out in 2011. Subsequently a number of changes were made to certain general binding rules in 2013.

This consultation, which ran from 8 December 2016 to 2 February 2017, invited stakeholders to respond to proposed changes to The Water Environment (Controlled Activities) (Scotland) Regulations 2011 ( CAR).

There were 4 key elements to the consultation: