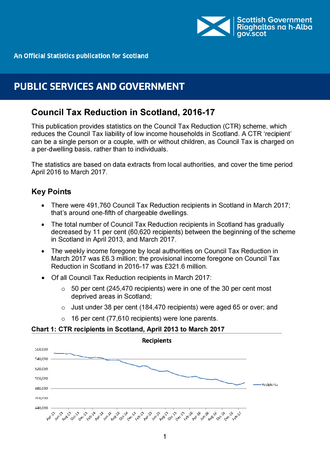 The Scottish Government introduced CTR on 1 st April 2013 to replace Council Tax Benefit ( CTB). CTB was implemented by the Department for Work and Pensions ( DWP) and was abolished under the provisions of the UK Welfare Reform Act 2012. Entitlement to CTR in Scotland replicates, as far as possible, previous entitlement to CTB. This reflects a variety of circumstances, including unemployment, low pay and inability to work because of disability or caring commitments.

1.1 How CTR awards are calculated

Entitlement to CTR and the amount awarded is based on the status and income of the applicant and their household. Figure 1 shows the process an application goes through to calculate whether CTR should be awarded and, if so, how much.

Some useful explanations on the terms used when describing CTR:

Passporting benefits - receipt of one of the following benefits automatically qualifies the recipient for full CTR:

Applicable Amount - The amount of money that the government says is required for a household to live on. This is a personal allowance - which varies depending on age and family status - with the potential for premiums to be added. For example, if the applicant is a carer, they would receive the relevant personal allowance plus the carer premium. Some examples of personal allowances and premiums for 2016-17 are given in Table 1 alongside their equivalents for 2017-18.

Income Assessment - Undergone by applicants not in receipt of a passporting benefit, and who have less than £16,000 in savings, to determine their eligibility for CTR. The 'means-test' assessment compares the household's assessable income (as defined under CTR) and their applicable amount.

Partial CTR - The household contributes 20% of their excess income towards their Council Tax liability and the remainder of the liability is the CTR award. Figure 2 provides an illustrative example of a partial CTR calculation.