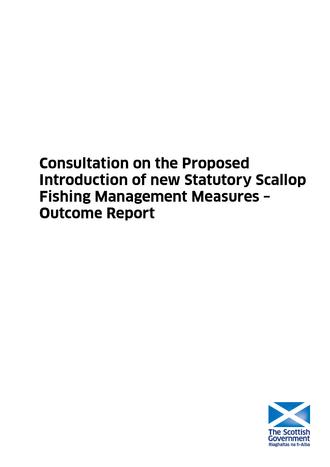 This section records the responses received in relation to each question and provides a brief summary of comments. The analysis seeks to draw out underlying themes and concerns.

Question 1: Do you support the introduction of a flat rate 8 per side limit on dredges within the 12 nautical mile zone?

There were 47 responses to this question and a majority supported new restrictions on the number of dredges per side that can be used within 12 nautical miles of the coast. Some also felt that bar length restrictions should be used alongside, or instead of, dredge restrictions.

Opponents to the proposed limit fell into two groups.

Firstly, there were those who opposed the measures on environmental grounds. They felt that the proposal did not go far enough and would be of limited success in reducing overall effort in the dredged fishery. Further controls were called for including fewer dredges per side, closed areas and the prohibiting of scallop dredging within three miles of the coast. Environmental groups in particular highlighted the wider impact that scallop dredging can have on the marine environment.

There were also those who opposed the changes on fishing grounds. Some felt the restrictions may make some vessels unviable and there was criticism that the measure would impact the same vessels that been most heavily affected by inshore restrictions introduced in The Prohibition of Fishing for Scallops (Scotland) Order 2003. Marine Scotland was challenged that this proposal was discriminatory.

Question 2: Do you support the removal of restrictions on dredges outside 12 nautical miles of the Scottish coast?

There were 47 responses to this question and a majority were against proposals to lift dredge restrictions outside 12 nautical miles. Opponents stated the move would be a step back for scallop management in Scotland and would have a negative impact on stock conservation and on the seabed. It was felt there needed to be some restrictions in place in the offshore sector.

Some respondents thought that authorities should be pursuing an EU wide adoption of the 14 per side limit outside 12 nautical miles.

Those who supported the lifting of restrictions commented that the measures would help with displacement and ensure equality with vessels from other EU Member States.

Question 3: Do you support exempting from regulation, attachments to dredges whose purpose is to increase the safety and speed with which dredges can be handled?

Forty-five responses were received to this question and there was near universal support. However, there was concern that no attachments should be allowed which reduced the selectivity of dredges and that any changes would need to be clearly defined and well enforced.

Question 4: Would you support the introduction of a phased increase in the minimum landing size for scallops from 100mm to 105 and then to 110?

Forty-nine responses were received to this question with a majority supporting the proposal. Comments in support of the measure included: it would help to improve the quality of the product; it is difficult to find a market for smaller scallops and it would result in a greater number of scallops being left in the sea to breed.

However, there was also strong opposition to the proposal. It was suggested that in some Scottish waters scallops do not grow large enough to justify the increase and there were calls for evidence of the scientific and economic impact of increasing the minimum landing size. There were strong objections on the grounds that the increase may make some businesses unviable (not only fishing vessels but processors also).

Other objections stated proposed measures did not go far enough and called for larger minimum landing sizes, or that 110mm should be adopted immediately instead of the two stage process.

A range of minimum landing sizes was proposed as an alternative, such as: 105mm, 112mm and 120mm. Those who supported the smaller increase to 105mm also tended to state that scallops in some areas around the coast did not grow to 110mm. Those supporting larger minimum landing sizes did so on the grounds that this would improve stock recruitment and support stock conservation measures.

Question 5: Do you agree that all scallops landed into Scotland and carried within the Scottish zone must comply with the Scottish minimum landing size?

There were 47 responses to this question and a majority felt all scallops landed or carried into Scottish waters should comply with the Scottish minimum landing size. Those who expanded on their response felt that compliance would otherwise be difficult or impossible.

However, there were those who thought the effects of this measure, coupled with the increase in minimum landing size, would have a negative impact on their business. This was particularly true in respect to onshore processors.

An alternative suggestion was that a reporting system could be put in place. Here, fishermen could report that they had fished in areas with different minimum landing size restrictions and would be landing different sized scallops.

A range of views on topics not covered in the consultation were also received in relation to scallop management.

Environmental groups thought the proposals did not go far enough and wider management measures were needed to protect scallop stocks and the marine environment. Measures proposed included closed areas, curfews and the introduction of a ban on mobile fishing (including dredging) within three miles of the Scottish coast.

A range of responses, including those from some fishing associations and environmental organisations highlighted a lack of knowledge of scallop stocks around the Scottish coast and a lack of justification - both scientific and economic - for the proposals.

Though its response did not deal with the proposals in the consultation, Scottish Water used the opportunity of the consultation to put forward suggestions in relation to its infrastructure. It proposed that there should be an exclusion zone of 250m on either side of Scottish Water cables and pipelines in order to stop potential damage to equipment and also for food hygiene reasons.