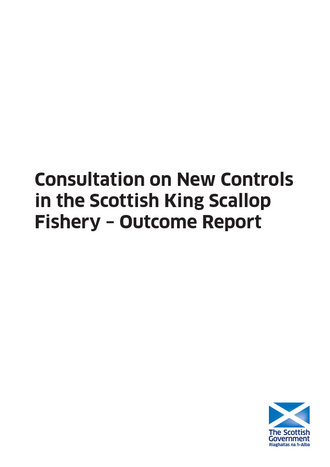 Annex A - Additional Analysis of the King Scallop Fishing Fleet

In discussions and responses to the Consultation, some stakeholders cited recent declining returns and a growth in the number of vessels prosecuting the fishery which Marine Scotland wished to investigate further. In this section an analysis of effort and catch data across the fleet is carried out. Due to the nomadic nature of some parts of the industry we have carried out analysis on a Scotland and UK-wide basis to place the Scottish sector in the context of the United Kingdom.

A summary of the key points are:

Figure 1: Number of vessels by length in Scottish and the rUK dredging fleet from 2000 to 2014.

When comparing Days at Sea ( DAS), however, all of the length classes of the Scottish fleet have remained consistent throughout the period - fluctuating between 12,000 and 17,000 DAS (Fig. 2). These fluctuations appear to have taken place in three phases, with a decrease every 5-6 years and then a recovery to previous levels.

For the broader UK fleet, DAS have remained steady for the over 15m fleet, but have increased for the 10-15m fleet from around 5,000 DAS in 2000 to 7,300 days in 2014. This coincides with the observed increase in vessel numbers. In the rest of the UK, under 10m sector DAS have not changed (around 2,000) even though the number of vessel in this length class have increased substantially.

The above pattern of improved efficiency of the Scottish fleet is confirmed by landings where a decreasing number of Scottish vessels have landed a higher volume of scallops year-on-year (Fig. 3). Whilst apparent in all vessel size classes, this is most evident for the over 15m fleet, given their steeper decline in number of vessels yet overall increase in volume of landings.

For the remainder of the UK, the volume of landings have increased for all length classes, except for the under 10m vessels, which is not to the level expected given the significant increase in the number of vessels (Fig. 1).

Figure 3: Volume of landings by length of vessels in Scottish and the rUK dredging fleet from 2000 to 2014

The overall value of landings in real terms (Fig. 4) has largely tracked changes in landing weight (Fig. 3). Amongst Scottish vessels, growth in the value of landings. has been largely driven by over 15m vessels whereas in rest of the UK the 10-15m element has also been significant.

Figure 4: Value of landings by length of vessels in Scottish and the rUK dredging fleet from 2000 to 2014

Catch per unit effort ( CPUE) summarises total catch over the effort required to take that catch. Changes in CPUE may be due to a combination of progress in technical efficiency and/or a change in stocks. In terms of volume of landings per day at sea, CPUE of the Scottish under 15m fleet has remained relatively stable (a very slight increase), whilst it has increased for the over 15m fleet with a peak of 1.6 tonnes per DAS in 2012 as Scottish vessels increased their presence in English waters over the period (see below). There has, however, been a decline since then down to 1.22 tonnes per DAS in 2014. Similar trends have been experienced by the rUK scalloping fleet but with a decrease across all length classes from 2012.

Figure 5: CPUE by volume by length of vessels in Scottish and the rUK dredging fleet from 2000 to 2014

An alternative measure of productivity is assessing the value per unit effort ( VPUE), which takes into account the change in prices in addition to the CPUE. In this case the decline is also documented by the VPUE (revenue per day at sea) with the Scottish under 15m fleet being the only fleet which has maintained VPUE throughout the period. Interestingly, the Scottish over 15m fleet have seen a much steeper climb in VPUE than their counterparts in rUK, which is due to the price paid per tonne as displayed in Figure 7. This graph plots a slight decrease in value per tonne received by the rUK vessels over the 14 year period yet a slight increase in price per tonne for the Scottish fleet.

Figure 6: CPUE by value by length of vessels in Scottish and the rUK dredging fleet from 2000 to 2014

Figure 7: Average price per tonne for the Scottish and rUK fleet.