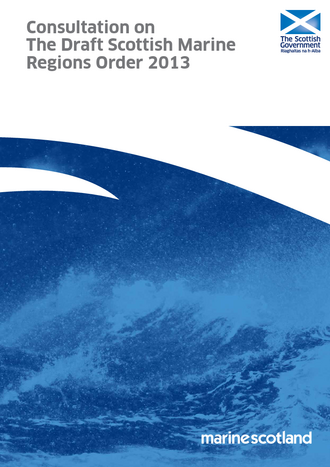 1. Thank you for taking the time to consider this consultation paper. The Marine (Scotland) Act 2010 introduces statutory marine planning for the first time in the Scottish marine area. The Act provides for a National Marine Plan and for the delegation of marine planning functions to a regional level. Scottish Ministers have the power to designate and identify the boundaries of Scottish Marine Regions through secondary legislation, and your input will help ensure that this legislation is as required.

2. We consulted on the identification and designation of an appropriate set of Scottish Marine Regions to implement marine planning at a regional level in Scotland. The public consultation ‘ Scottish Marine Regions, Defining their boundaries’ was held from November 2010 to February 2011. http://www.scotland.gov.uk/Publications/2010/11/22125407/0

3. The consultation document sought views on:

4. The consultation document was published on the Scottish Government website and distributed directly to key stakeholders with a known interest in the issue. Scottish Government officials also presented the consultation at twelve public meetings in coastal communities organised by Scotland’s Local Coastal Partnerships, which were attended by a range of stakeholders.

5. A total of 81 written responses were received. An analysis of the responses which also contains key themes raised at the public meetings can be found at:

7. The Scottish Marine Regions Order 2013 as drafted delivers the option in paragraph 6 above, but with some variation to the boundaries that were originally illustrated in the consultation document. For example, the seaward limits of Scottish territorial waters (12 nautical miles from baseline) was not given as an option for the extent of the regions but there was sufficient support from the public events and responses to the consultation to accept 12 nautical miles as the limit. The consultation also indicated only limited support for excluding suggested Strategic Sea Areas and therefore these are included within the regions set out in the Order.

8. Similarly, certain boundaries were adjusted as a result of consultee responses. These include:

9. The draft Order identifies the 11 proposed Scottish Marine Regions and establishes their boundaries. The co-ordinates are based on boundaries set in The Scottish Adjacent Waters Boundary Order 1999; The Town and Country Planning (Marine Fish Farming) (Scotland) Order 2007 which defines Marine Planning Zones for local authorities; and other existing digital maps. The landward boundary is Mean High Water Spring tide and the extension of the boundaries out to the 12 nautical mile limit is based on the Territorial Sea Act 1987.

10. Due to the number of coordinates required to identify the regions, an illustrative map has also been prepared and is included within the draft Order.

12. This consultation document is on the identification and establishment of the Scottish Marine Regions in legislation only.

13. Further discussions with stakeholders regarding the formation of Marine Planning Partnerships will be held after the legislation setting out the boundaries is in force.

14. Marine Scotland is considering approaches to developing regional marine planning and is currently working with local authorities in Highland and Orkney, and other interested parties, to develop a marine spatial plan for the Pentland Firth and Orkney waters. It is anticipated that the products of this work would feed into future regional plans. Marine Scotland has also recently appointed a regional marine planning officer in Oban, working with local interests to assist in the development of planning for the Argyll region, and is liaising with interested parties in a number of other localities to discuss possible governance arrangements.

15. We would welcome your views on the proposals in The Scottish Marine Regions Order 2013. We would particularly welcome your comments on: the Order as drafted; the co-ordinates establishing the marine region boundaries; the names of the regions suggested; and the illustrative map.

16. We would particularly welcome views on the boundaries outlined at paragraph 8 above, as these have changed from the previous consultation and we are aware there remains a range of views.

17. Please note that the closing date for this consultation is 28 February 2013.

Responding to this consultation

You are invited to respond to this consultation by 28 February 2013. Please note that no extensions to this date can be permitted.

Please send your response with the completed Respondent Information Form (see ‘Handling your Response’ below) to:

Responses can be sent by email, by post or by online electronic response form:

We would be grateful if you would use the consultation questionnaire provided in your response as this will aid our analysis of the responses received.

The Scottish Government has an email alert system for consultations, http://register.scotland.gov.uk. This system allows stakeholder individuals and organisations to register and receive a weekly email containing details of all new consultations (including web links). It complements, but in no way replaces SG distribution lists, and is designed to allow stakeholders to keep up to date with all SG consultation activity, and therefore be alerted at the earliest opportunity to those of most interest. We would encourage you to register.

All respondents should be aware that the Scottish Government are subject to the provisions of the Freedom of Information (Scotland) Act 2002 and would therefore have to consider any request made to it under the Act for information relating to responses made to this consultation exercise.

Next steps in the process

Where respondents have given permission for their response to be made public and after we have checked that they contain no potentially defamatory material, responses will be made available to the public in the Scottish Government Library and on the SEConsult web pages by 1 April 2013. You can make arrangements to view responses by contacting the SG Library on 0131 244 4552. Responses can be copied and sent to you, but a charge may be made for this service.

Following the closing date, all responses will be analysed and considered along with any other available evidence to help us refine the proposed Scottish Marine Regions Order 2013. We aim to issue a report on this consultation process and lay the Order in the Scottish Parliament in April 2013. As it will be subject to affirmative parliamentary procedure it will come into force only following its approval by resolution of the Parliament. It is anticipated that the soonest the Order would come into force is May 2013.

If you have any comments about how this consultation exercise has been conducted, please send them to Sarah Smith. (contact details as above)

The Scottish Government encourages consultation that is thorough, effective and appropriate to the issue under consideration and the nature of the target audience. Consultation exercises take account of a wide range of factors, and no two exercises are likely to be the same.

Typically Scottish Government consultations involve a written paper inviting answers to specific questions or more general views about the material presented. Written papers are distributed to organisations and individuals with an interest in the issue, and they are also placed on the Scottish Government web site enabling a wider audience to access the paper and submit their responses. Consultation exercises may also involve seeking views in a number of different ways, such as through public meetings, focus groups or questionnaire exercises. Copies of all the written responses received to a consultation exercise (except those where the individual or organisation requested confidentiality) are placed in the Scottish Government library at Saughton House, Edinburgh (K Spur, Saughton House, Broomhouse Drive, Edinburgh, EH11 3XD, telephone 0131 244 4565).

The views and suggestions detailed in consultation responses are analysed and used as part of the decision making process, along with a range of other available information and evidence. Depending on the nature of the consultation exercise the responses received may:

Final decisions on the issues under consideration will also take account of a range of other factors, including other available information and research evidence.