In May 2016 the current Scottish Government was elected with a clear mandate that the Scottish Parliament should have the right to hold an independence referendum if there was clear and sustained evidence that independence had become the preferred option of a majority of the Scottish people – or if there was a significant and material change in the circumstances that prevailed in 2014, such as Scotland being taken out of the EU against our will.

On the 23 June, Scotland delivered a strong and unequivocal vote to remain in the EU.

In Scotland, there was a majority for Remain in every single local authority, with 62 per cent across the country voting to Remain. In contrast a majority in England and Wales voted to leave the EU.

As a consequence, Scotland is now faced with one of the specific scenarios in which this government pledged that the Scottish Parliament should have the right to hold an independence referendum.

In the immediate aftermath of the EU referendum, as we face the social, economic and financial damage that leaving the EU will bring, I made it clear that I would explore all options to protect Scotland's vital national interests and that the Scottish Government would begin, in line with the commitment we were elected on, to prepare the required legislation to enable a new independence referendum to be held if it became clear that was the only or best way of protecting those interests.

In our Programme for Government we repeated that commitment, stating that we would publish for consultation a draft referendum bill.

The UK Government's recent statements on its approach to leaving the EU raise serious concerns for the Scottish Government. We face unacceptable risks to our democratic, economic and social interests and to the right of the Scottish Parliament to have its say.

Indeed those statements contradict the assurances given before the independence referendum in 2014 that Scotland is an equal partner within the UK and that a vote against independence would secure our EU membership.

For many people, this approach will be evidence of a wider democratic deficit within the UK, where decisions about Scotland are too often taken against the wishes of people who live here.

Protecting Scotland's interests is the most important job of this government. We must have every option available to do this and it is for that reason we are now publishing the draft referendum bill for consultation.

In 2014, our objective was for the conduct of the referendum to meet the highest standards of fairness, transparency and propriety. That objective was achieved then and remains crucial for any future referendum. The consultation and draft bill propose that the approach should be broadly the same as in 2014, with some technical adjustments to reflect recent changes in elections law and procedures such as individual registration.

As in 2014 the proposed franchise for the referendum will match that for Scottish Parliament elections. That will mean that two important groups of people would have a voice that was denied to them in the recent referendum on EU membership: 16 and 17 year-olds and citizens of EU countries who have made Scotland their home.

This government remains willing to work with the UK Government to negotiate a future relationship with Europe that is in line with the views of the overwhelming majority of the Scottish people and which works for the United Kingdom as a whole.

We will put forward constructive proposals that will both protect Scotland's interests and give an opportunity for the UK Government to demonstrate that Scotland is indeed an equal partner.

But if it becomes clear that it is only through independence that Scotland's interests can be protected, then the people of Scotland must have the ability to reconsider that question, and to do so before the UK leaves the EU. 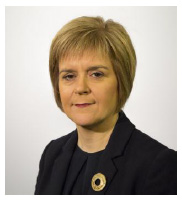