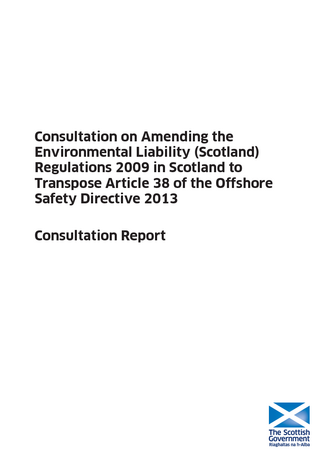 1. The Scottish Government consulted on a draft order to amend the Environmental Liability (Scotland) Regulations 2009. The consultation ran for 8 weeks from 18th February 2015 to 14th April 2015 and received 4 responses.

2. The purpose of the amendment is to implement Article 38 of Directive 2013/30/ EU on the safety of offshore oil and gas operations ( OSD). Article 38 extends the scope of the Environmental Liability Directive (2004/35/ EC) in the marine environment in relation to marine waters. This transposition in relation to Scottish Territorial Waters forms part of a UK wide exercise to implement the OSD.

3. None of the responses received have resulted in changes to the draft Order. However minor drafting improvements have been made. These do not change the effect of the Order. This revised Order will be laid before the Scottish Parliament to take effect on 19 July 2015.