The Race Equality Action Plan includes an action for the Child Poverty Measurement Framework to give due consideration to the experiences and issues faced by minority ethnic groups living in poverty. This paper presents ethnicity breakdowns, where possible, for the Child Poverty Measurement Framework indicators. It also draws on wider evidence about the drivers of poverty, and draws conclusions about the actions needed to address poverty among minority ethnic families.

Although there is, of course, considerable diversity between and within different minority ethnic groups, on average, minority ethnic families are more likely to be in poverty. Evidence suggests there are barriers across all three key poverty drivers.

Scottish minority ethnic families in work are paid less per hour, and are more likely to be underemployed – both in terms of parents working fewer hours than they want to, and in terms of degree-qualified parents being employed in jobs below their qualification level. There is also a higher percentage of workless households.

Minority ethnic school leavers outperform other pupils at SCQF levels 5 and 6, and have been for nearly a decade. However, the unemployment rate of minority ethnic young people is higher, and when in work they are clustered in particular sectors.

Combined with issues around accessing suitable childcare, this all leads to lower income from employment.

Many minority ethnic groups have a higher reliance on benefit income than other households. Take-up of benefits may be an issue, but there is a lack of evidence. 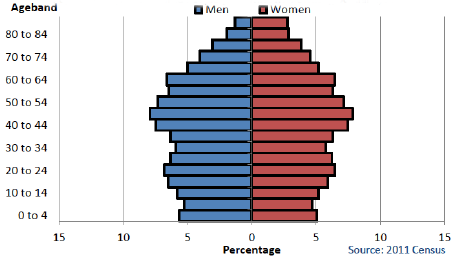 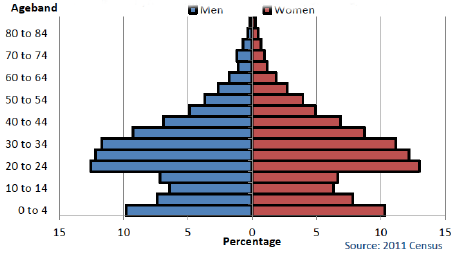 Number of dependent children by ethnicity of household reference person, 2011 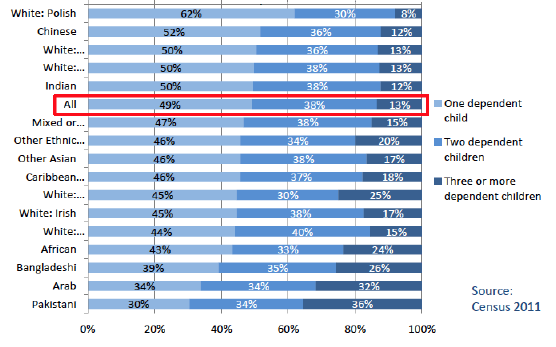 Poverty and ethnicity in Scotland

Children in minority ethnic (non-white) households are more likely to be in poverty than other children in Scotland.

The poverty gap between children in minority ethnic households and all children has decreased over time, although there are early indications that it may be increasing again.

Percentage of children from each group in relative poverty after housing costs (Source: Family Resources Survey)

Percentage of children from each group in absolute poverty after housing costs (Source: Family Resources Survey)

Percentage of children from each group in combined material deprivation and low income after housing costs (Source: Family Resources Survey)

There are, of course, differences in the prevalence and experiences of poverty between (and within) different minority ethnic groups.

Percentage of working age adults from each group in relative poverty (below 60% of UK median income) after housing costs (Source: Family Resources Survey)

Data on the drivers of poverty broken down by ethnicity

Understanding what is driving the higher risk of child poverty among minority ethnic families is hampered by challenges with data availability relating to small sample sizes for minority ethnic groups. The table on pages 13-18 notes what breakdowns of the Child Poverty Monitoring Framework Indicators are available for Scottish minority ethnic households. Where available, these figures are provided and discussed in this paper. Where sample sizes do not allow such a breakdown, alternative indicators have been considered. In most cases (the exception being the data on Scottish school leavers qualifications), individual minority ethnic groups have sample sizes that are too small to reliably report on their own. Therefore, although it is far from ideal, they have been combined into a single 'minority ethnic' category.

A higher percentage of minority ethnic children live in households where no adult is in paid employment – 16.4%, compared to 11.7% of all children in Scotland (2017 data).[2]

Evidence from the 2011 Census shows that employment rates are lower for certain minority ethnic groups, particularly African or Caribbean or Black people. 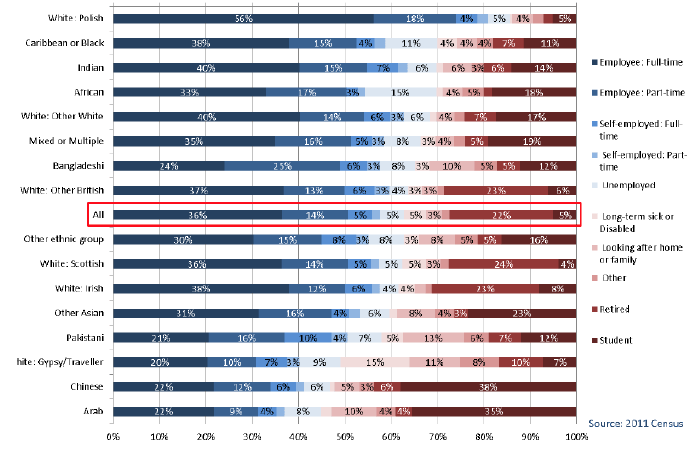 For those families in work, minority ethnic families with children work fewer hours, on average – 24 hours per week per working age adult, compared to 31 hours for all households with children in Scotland (2015-2018 data).

UK-level data show that the ethnicity pay gap exists for most minority ethnic groups, with Black African, Caribbean, Pakistani and Bangladeshi men experiencing the greatest disadvantages in the UK labour market. These groups tend to have higher than average representation in routine or semi-routine occupations. The same research found that across all ethnic groups, pay gaps are generally larger for first generation migrants than for UK-born generations.[4]

UK research has shown that the ethnicity pay gap is the result of segregation into less well paid occupations, being in part-time work (which is associated with lower hourly pay than full-time work), and minority ethnic groups being paid less for the same work.[5] Greater unexplained differences in wage levels at the top end of the labour market might be explained by employer discrimination.[6] A number of research reports have also highlighted issues with discrimination and bias in relation to progression and promotion, which will also impact on pay levels across all levels of the labour market.[7]

The under-employment rate refers to those who are in work but would like to work more hours for the same rate of pay, a measure of the under-utilisation of labour. The underemployment rate amongst minority ethnic parents is 9%, compared to 7% for all parents (2014-2017 data).

As well as wanting to work more hours, there is evidence that highly qualified minority ethnic parents are not employed in jobs commensurate with their skills and qualifications. Nearly 28% of minority ethnic graduate parents are working in low and medium skilled occupations, compared to nearly 17% of all graduate parents. This echoes other research.[8] UK data on graduate destinations shows that, five years after graduation, only Asian Indian and Asian Bangladeshi men and women surpass the sustained employment rates of white graduates, whereas Black African and Chinese graduates have notably lower employment rates[9].

16.4% of minority ethnic parents in Scotland have low or no qualifications[10], compared to 7.7% of all parents in Scotland. This 2017 APS data shows a larger gap than for non-parents (both groups being around 13%) and appears to contradict the results of the 2011 Census, which found that minority ethnic adults had a higher qualification rate than the general population. This is an area that requires further investigation and research.

Evidence from other sources, including the Joseph Rowntree Foundation (JRF), suggests that some minority ethnic groups are more likely to work irregular, night or weekend hours (e.g. in restaurants or hotels or as taxi drivers), and therefore require more flexible childcare than is currently available.[12]

Another JRF report found that lack of knowledge and information about childcare or support for carers is an important factor in low take-up among some minority ethnic groups, and there is also a lack of inclusive services (both childcare and other care services) that take into account cultural and religious differences[13]. A more recent report by Close the Gap (2019) echoed and added to these findings, and suggested that the lack of cultural sensitivities in formal childcare may be putting some families off from using this type of childcare. For migrant minority ethnic women, the lack of alternative informal networks to help with childcare limited their ability to enter the workforce or increase their working hours. It was also noted that the early years workforce in Scotland is predominantly white, which does not help address perceptions of cultural insensitivities.

Housing costs have a similar impact on poverty risk for children in minority ethnic households as they do for all children.

Percentage of children in poverty before and after housing costs 2015-18 (Source: Family Resources Survey)

Other costs of living

On take-up of benefits, a quick search and review of evidence suggests that this might be lower amongst minority ethnic groups – with cultural and religious factors leading to non-claiming, under-claiming and delayed claiming, particularly amongst Chinese and Bangladeshi households.[16] However, there does seem to be a lack of evidence in this important area.

Many of the research reports referenced above have made wide-ranging recommendations for government, and employers, on how to address the issues that minority ethnic families in child poverty face. Most of the recommendations focus on the income from employment driver of child poverty, i.e. the labour market and tackling the underemployment and lower average hourly pay of minority ethnic groups.

Common recommendations to improve the labour market and employment prospects of minority ethnic people include:

Other policy suggestions worth highlighting include the use of SG and local authority procurement procedures to promote recruitment and progression for minority ethnic people, and the SG making investment conditional upon employers taking such action where people from ethnic minority communities are underrepresented. One report also suggested that employees should consider 'positive action' schemes where there is persistent underrepresentation.

One of the most striking findings on skills and qualifications is the higher achievement of all minority ethnic school leavers - a trend that has been evident for nearly a decade. Yet, there is a higher rate of unemployment amongst minority ethnic groups, including young people, and a clustering of people of all ages, including young people, employed in certain, often low paid, sectors. It is recommended that research is undertaken to find out what happens to minority ethnic school leavers in Scotland, and why. This could include the LEO database, which tracks minority ethnic graduates outcomes using linked administrative data, but should be broader than this. There is also a need to clarify how the rate of low or no qualifications among minority ethnic adults and parents compares to the general population.

Take-up of social security benefits by minority ethnic families may well be an issue, but there is a lack of research in this area. The Social Security Experience Panels programme of research includes qualitative research with ethnic minorities to explore in detail how they want the Scottish social security system to work for them. It is recommended that research should be undertaken in association with the Social Security Experience Panels to examine the issues, and how uptake of devolved and non-devolved benefits can be maximised. However, as panel members are self-selecting, there may be a need to make additional efforts to reach under-represented minority ethnic group families.