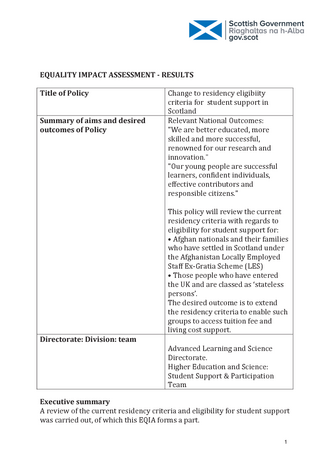 Executive summary
A review of the current residency criteria and eligibility for student support was carried out, of which this EQIA forms a part.

The EQIA identified that extending the current loan system would advance opportunities for all those who have relocated to the UK under the Afghan LES Scheme and those considered ‘Stateless’ by allowing those in further and higher education to access tuition fee and living-cost support while they study.

The Scottish Government does not consider there to be any direct or indirect discrimination as a result of this policy change. Those who will benefit from the extended eligibility rules are not being treated more favourably than others on the ground of nationality, but because they have special immigration status. It is believed this is a proportionate and justifiable position.

Background
At present, in order to access tuition fee and living cost support, students are required to meet residency rules which are laid out in legislation and generally require students to:

Currently, Afghans entering the UK under the terms of the LES scheme and stateless persons are not eligible for tuition fee or living cost support as they are not settled under the Immigration Act 1971 and do not meet the ordinary residence rules or any of the exceptions to them e.g they are not regarded as refugees by the Home Office.

The aim of this policy is to review the current regulations and consider a change to the policy that would allow Afghans and their families settled under the LES scheme and those considered 'Stateless' to access tuition fee and living-cost support while they study. This contributes to the following national outcomes:

The Scope of the EQIA
The policy has relevance to the protected characteristic of race. Given that the change to the residency policy would open up opportunities to Afghan Interpreters, Stateless people and their families, a concise and focused EQIA was carried out.

At present, referring to statistics from the Convention of Local Authorities ( CoSLA), 313 Afghan nationals have been settled in Scotland under this scheme and the proposed change would have the potential to benefit those Afghans currently of an age to apply for Further or Higher education and those who would become eligible over the next few years. It is currently not possible to quantify the demand from those considered 'Stateless' who would take up this offer of support; however in 2016 there were 41 people who had entered the UK as stateless people and been granted leave to remain.

Key Findings
The EQIA identified that there are gaps in the information available relating to the impact on the protected characteristics of the people who may arrive in the UK as ‘Stateless’ people or under the Afghan LES scheme. However, opening up student support to all eligible Afghan’s relocated under the LES scheme and those considered 'Stateless' is seen as a positive change as it allows those in further and higher education to access tuition fee and living-cost support while they study.

Recommendations and Conclusion
In conclusion, extending the current loan system would have a positive impact for all those who have relocated to the UK under the Afghan LES Scheme and those considered ‘Stateless’.

We will continue to monitor the number of people who arrive in the UK under these schemes and apply for student support in Scotland. As the Student Awards Agency Scotland ( SAAS) gather the statistical data on student applications we will be able to monitor the impact of this policy change on relevant groups going forward.